The two new grinders in the Jx-series from 1Zpresso are some of the best manual grinders you can get today. But which one of them should you pick?

Manual grinders have always been kind of slow compared to their electrical counterparts.

But that’s not the case with the new Jx series from 1Zpresso. I’m not exaggerating when I say that these grinders are faster than some electrical grinders (cough, cough Baratza Encore and Wilfa Uniform).

With the very attractive price in mind, these grinders should appeal to many price and quality-conscious coffee people.

I have had both the Jx and the Jx Pro for a while now, so I have a pretty clear picture of the pros and cons of each model.

Even though the grinders have the same burrs, there are actually some significant differences that you should be aware of.  Read on, if you want to know all the details.

tl;dr: I highly recommend the Jx-grinders. If you’re mainly brewing pour over coffee, get the basic version. If you’re looking for an espresso-grinder, go for the Jx Pro.

For international orders, visit this page 🌍 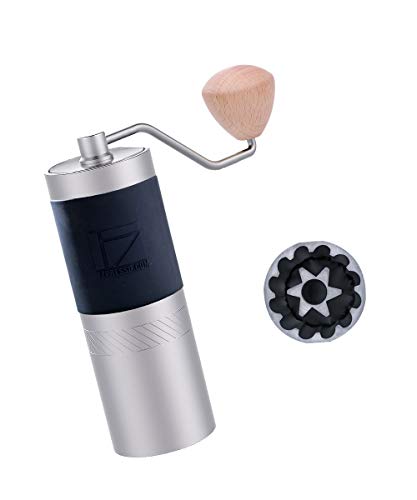 513 Reviews
1Zpresso Jx
See more reviews
Please, note: I have had the grinders for a year now. Here’s a video with my update view on both them.

I encountered the company for the first time at the Taipei Coffee Expo in 2017 and have since followed their work with curiosity. I have previously tested their travel model ‘Mini Q’ and the allrounder ‘E’, which is suitable for both espresso and pour over.

While both models are excellent grinders they each have their own small shortcomings. They are good but if I had to rely on one of them everyday I’d probably start to miss some of the features of the high-end models.

Both Q and E have relatively small capacity and both have 38mm burrs. In practice it means that the workflow when brewing larger batches is slightly annoying. You’ll have to grind, then refill the hopper, and grind again. Also, the grinding itself takes a bit longer than I’d prefer.

For a while I have been hoping to see a grown-up grinder with 48 mm burrs from 1Zpresso. So when the company reached out to me and asked if I wanted to test the Jx and Jx Pro, I had no hesitation.

The products in the Jx-series look great. These grinders are sleek and well-made; yet there’s attention to detail. The big wooden handle knobs are very nice in the hand, and the black color looks sexy on the basic Jx.

The Jx Pro has a grey-silver finish that you see on many of the company’s grinders.

Please note, that my review unit of the Jx is black and has a glass receptacle. In the last batches from the factory, they have changed to an all-aluminum silver-grey version.

I’m not sure, if the black-glass model I have, will be back in production again. I have mixed emotions about this; on one hand it looks and feels great with the glass, however, it is a bit of a pain to get hold o a new glass if an accident occurs. I think 1Zpresso also realized this and eventually changed to an all-aluminum finish.

Both Jx-models have a broad rubber band covering much of the body, which gives an excellent grip. This is important as the diameter of the grinder is rather big.

On the inside there are two bearings ensuring ultra smooth spinning action. As always with grinders from 1Z the bearings are some of the best in the industry.

Overall, however, the build, the tactile sensations, and the ergonomics are amazing. They just feels good in the hand, look sexy, and grind smoothly.

As far as portability is concerned, these grinders are not the travel-sized per se. The basic is weighing in at 650 grams/23 oz. Sizewise it’s comparable to Helor 101 and Comandante C40 so it’s still possible to bring on a trip.

The Pro id about 3.8 oz/110 grams heavier than the already substantial little brother, so it is a big boy, comparable to some of the heavyweights in the manual grinder division.

If you’re looking for a dedicated travel grinder you should probably consider the Mini Q from 1Zpresso instead. 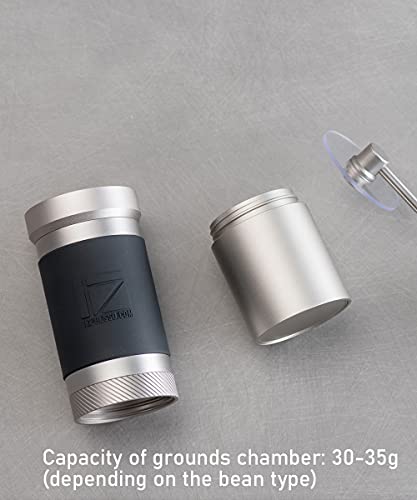 The standard Jx has a very simple system with small clicks for each increment. There are 12 numbers on the dial, but there’s a half extra step, between each, effectively giving you 24 clicks per full rotation.

Overall, the adjusment on the Jx is excellent, and way less headache than for example the Lido 3, or the Helor 101. It’s pretty similar to the well-known Comandante.

On my unit, however, they have made an unfortunate mistake, so you count backwards. In practice, it doesn’t affect the experience much, so I can live with it, and it should be an easy fix for future versions. It’s just a bit annoying.

On the Jx Pro the adjustment is completely different. The dial is located on top of the grinder right where you pour in the beans.

The adjustment on the Pro is very precise and responsive. Instead of 24 increments per rotation, you have 40.

This means that you have a lot more options when it comes to dialing in an espresso shot.

In practice, you can make decent espresso with the basic Jx, but you won’t have much wiggle room to dial in the shot. On the Jx Pro the range is wider. Not only because of the micro-adjustment; it simply seems like it’s engineered to have more range in the fine spectrum. And that extra focus on espresso and adjustment is really the key difference between the two models.

The two Jx’ers are extremely fast hand grinders, which is something I really appreciate.

After consistency, speed is the one thing I care most about when reviewing manual coffee grinders, and the Jx standard is the fastest, I have ever tried.

However, because the Jx’s burrs are very aggressive it requires a lot of strength to turn the crank. Personally, I don’t find it difficult at all at a typical setting for pour over but I’m 6.2 and in decent shape.

If you have small hands, arthritis or little grip strength, you might find it difficult.

This is especially the case, when you get to the finer end of the spectrum: When grinding finer, the two burrs will be closer to each other; obviously this requires more force when turning the handle.

The Jx Pro is still a very fast grinder, but it’s not as fast its little brother. The reason for this, as far as I can tell, is that the hopper is designed in a different way. It seems as if the beans are fed more directly into the burrs on the standard version.

I measured how fast both models could grind 15 grams on a pour over setting, and the result is 18 sec vs 24 sec.

I realize that this probably doesn’t sound like a lot, when you’re reading a review, but in daily use it means that I’d reach more often for the basic version.

For me, the standard Jx gets a few bonus points for being faster.

Espresso vs pour over

In the official info from 1Z they mention that both Jx-models are designed specifically for espresso while also being suitable for pour over.

You should take that with a grain of salt. In my opinion, the standard Jx is actually more suitable for manual brewing, while the ‘Pro’ is excellent for both styles of brewing.

The case for pour over is confirmed by the particle distribution; there are only few fines. That’s usually not the case with espresso grinders.

Since, the basic Jx has incremental steps you will not be able to fine tune your espresso shots with 100% accuracy. I have made shots with it, and they were tasty, however, I think the grinder really shines when it comes to manual brewing.

In my opinion, the standard Jx is actually more suitable for manual brewing, while the ‘Pro’ is great for both styles of brewing.

The Jx Pro is more of a pure espresso grinder because of the improved adjustment.

Grinding 20 grams of medium roast for espresso takes about 45 seconds, which is pretty solid.

The standard Jx shaves about 5 seconds off that time, but you get a more narrow range in return.

If your main use-case is espresso, you should go for the ‘Pro.’

The consistency of both Jx-grinders is amazing. I have been experiencing some extremely clean pour overs with both grinders.

They only produce a tiny amount of fines. You’ll see the drawdown time decrease a lot because of the uniform particle size, when coming to this grinder from most entry-level models.

Some of my readers have been emailing me to tell me about their experiences versus other grinders they owned.

My own experience in terms of consistency, shows that the Jx-grinders are up there with (if not better than) all the famous models such as Helor 101 and Comandante C40.

The flavor separation is clear, the aftertaste is long, and it’s easy to avoid bitterness even when going for high extractions. This is pro-level consistency, no doubt.

In my opinion this grinder is one of the best deals (if not the best) you can make when it comes to specialty coffee at the moment.

The Jx-grinders are faster than most — if not all — of their rivals. (Update, June 2020: The Timemore C2 is similar in terms of speed)

The design is not only attractive but also highly functional.

The grounds are very uniform and it can be used for espresso and pour over.

In my opinion the Jx-series set a new standard for manual grinders — especially when it comes to price-to-quality ratio.

There are  only a couple of small downsides I can think of:

The standard Jx, however, is 2-3 times cheaper compared to many rivals such as the Comandante and Helor 101, while running circles around them in many areas. At the current price it’s just a no-brainer. Frankly, I think it’s almost too cheap.

If you have read the review carefully, you’ve probably already realized that I don’t think the standard Jx is that great for espresso. The Pro, however, is excellent for that.

But while my brain says that you should go for the Pro, my heart is still with the standard Jx for the following reasons:

If you’re mainly brewing pour over or Aeropress, you’ll be so happy with this grinder.

However, if you’re specifically looking for an espresso grinder, then there’s no way around the ‘Pro.’ I think it’s as simple as that.

Personally, my preferred setup would probably be an electric espresso grinder, and then the standard Jx for everything else. However, if you’re on a budget and only able to afford one grinder, then the Pro beats the competition in most areas.

I’ll update my current grinder recommendation and tell people who ask me about manual grinders to go for the Jx as long as the market looks like it does today. It’s just that good.

➡️  Check the Price on Amazon

Update: I have gotten quite a few PM’s and emails about the Jx series, so just wanted to share a few here in case you’re still on the fence. 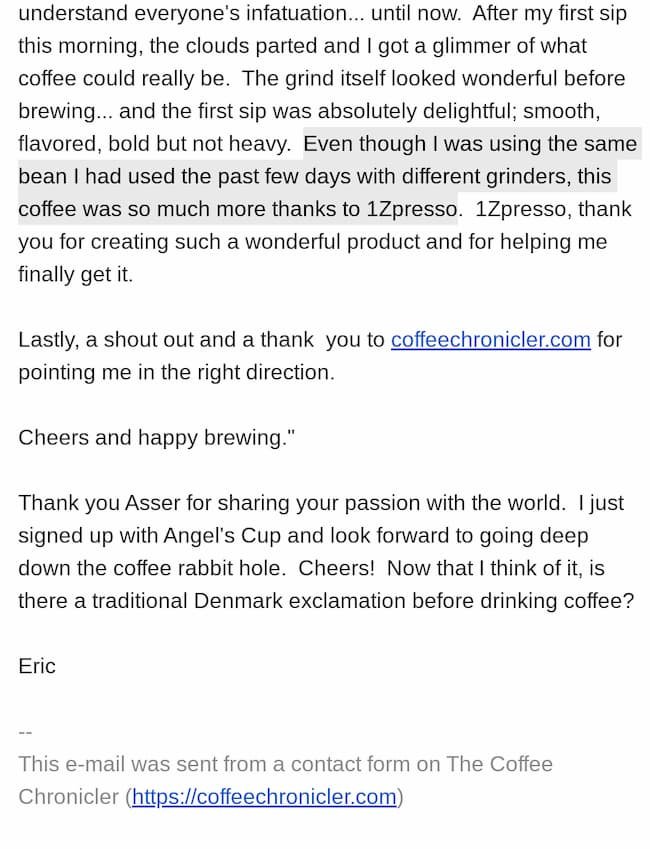 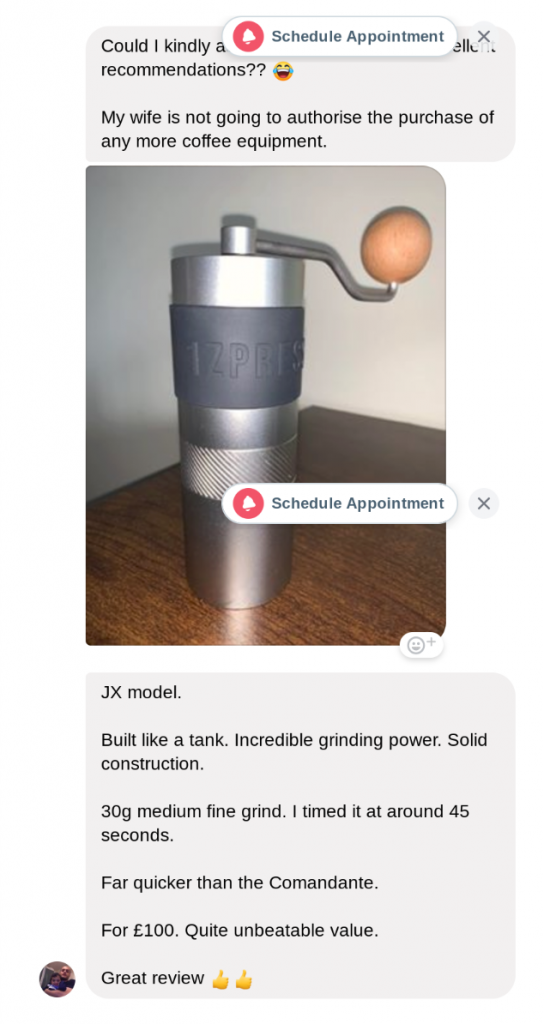 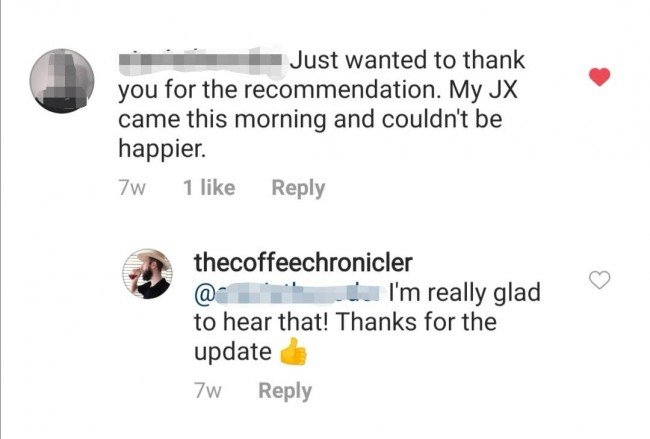 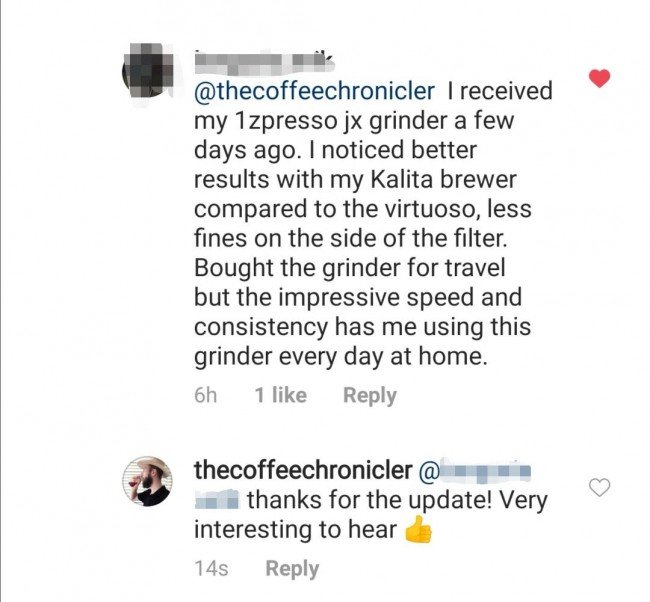