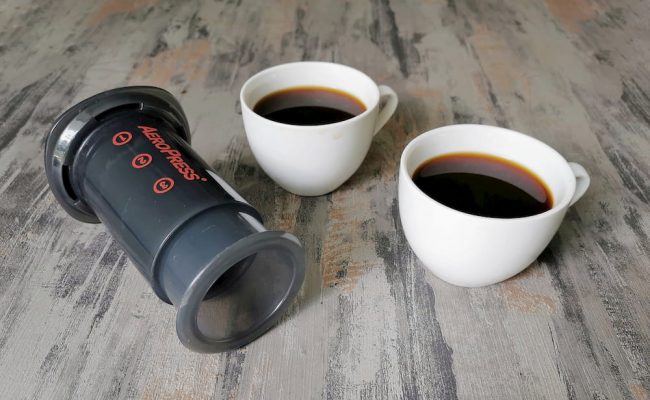 Aeropress for Two: How to make Large Servings

Can you really make big batches with the Aeropress? Yes, just follow this technique, and you’ll get the hang of it very quickly.

Everybody loves the Aeropress.

But if there’s one common complaint about the brewer it’s this:

Well, today I’ll explain how you can achieve it with the Supersized Aeropress recipe.

The Aeropress was envisioned as a single-serve coffee maker, but Alan Adler, the inventor, always was a big proponent of using the bypass technique to make multiple cups at the same time.

Bypassing has also been used frequently among the winners of the Aeropress World Championship.

However, I was never a big fan of it.

From an extraction point of view, it just isn’t efficient. I would always feel like I was wasting coffee when doing it.

So I started to experiment and found out that it’s possible to brew large servings for two people with the Aeropress.

In fact, it’s so easy that I’m surprised I haven’t seen anyone else write or talk about it before.

(The technique is inspired by Eldric Stuart’s Aubade recipe, however, he uses it in a rather different way).

I’ll try to give you as precise instructions as possible in the video and in the notes below, but this is more of a technique rather than a ‘recipe’ so you’ll have to dial it in at home.

Update: Since publishing the article, a few people have asked me why I move the plunger in the ‘unusual’ way during the first part of the brew.

Actually, the reason is quite straightforward: I want to push the water through the puck, without dislodging the filter or causing unnecessary agitation. If you push the plunger down a bit more than an inch, or pull it up straight (rather than at an angle), the vacuum could cause all sorts of problems.

Congratulations! You have just brewed two cups of Aeropress without bypassing!

Sidenote: For the video, I’m using the Aeropress Go, which has a slightly smaller capacity so the recipe is adjusted to 23 g to 350 grams of water instead.

Is an AeroPress worth it?

The AeroPress is awesome. It’s worth considering if you travel regularly, or want to prepare small amounts of coffee in a hurry. This brewer is convenient to use and simple to clean. Also, it’s solid, lightweight, and extraordinarily economical.

How big is an AeroPress scoop?

A single AeroPress scoop is equivalent to 2 tablespoons or around 17 grams. Measuring coffee by volume will be less exact than by weight so I suggest that you use a digital scale.

How many cups does an AeroPress make?

The primary constraint the AeroPress has is its capacity of 250ml. Bypassing simply means brewing a stronger cup coffee and then diluting by adding hot water. But check out my article, if you want to learn a simple way to brew two cups at the same time.

Timemore Black Mirror Review: Is this the Acaia Killer?

Aeropress for Two: How to make Large Servings