Baratza Sette Grinder Review: Which Model Should You Get?

The Baratza Sette grinders are unique in many ways. But they are also flawed. Find out, who they are for.

Baratza is one of the most prominent players in the grinding industry. In fact, this company only produces grinders.

While the rest of the coffee world has evolved a lot in the last 25 years, espresso grinders have more or less stayed the same.

Sure, new brands have entered the market, and tiny new ‘features have been added, but the underlying technology has pretty much remained the same for ages.

The Baratza Sette is so significant because it attempts to change some of the fundamentals of grinding.

It tries to turn grinding upside-down (literally) by making the outer burr spin instead of the inner cone-burr, which is the norm. This idea is what makes the grinder so unique. 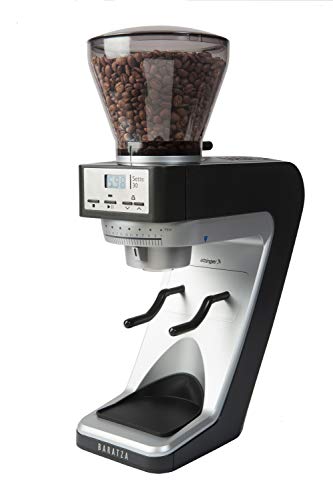 783 Reviews
Baratza Sette 30
The cheapest model in the Baratza Sette-series delivers the best value out. It has a few flaws, but overall it works excellent for single dosing.
See more reviews

There are currently three models in the Baratza Sette lineup, which all share a lot of the same features, such as general design and burrs geometry. However, there are some minor differences mainly when it comes to adjustment and dosing mechanism:

Overall, it’s a beautiful although polarising design. It doesn’t look like any other grinder on the market.

Sette means ‘seven’ in Italian, and that’s how this grinder is shaped if you look at it from the side.

Compared to a typical grinder, the two burrs are swapped around, meaning that the outer burr is spinning while the inner one is static. This has never been done before on a home burr grinder, and it’s pretty revolutionary.

There are some other quite nice details on the grinder. For instance, the oversized grounds bin is made out of a very nice plastic material similar to the latest generation of the AeroPress. There’s just something nice about using it.

The same goes for the rubber insert beneath it. It’s not really that necessary, but it’s just a nice example of attention to detail.

The Sette is mostly made out of plastic. This keeps the cost of the grinder down while also making it lightweight and easy to move around. On the other hand, the device also feels a bit flimsy and gives the impression that it might not be built to last. The choice of material is also responsible for poor sound isolation.

It’s well known that several issues have plagued the Sette over the years.

Today Baratza has managed to fix most of these issues except for the gearbox, which tends to fail eventually since it’s made out of plastic. Most users report that it will happen around the two years mark (depending on your use).

So if you see a Baratza Sette for sale second-hand, it’s often mentioned that the gearbox has been replaced under warranty.

The good thing about Baratza is that they are known for offering stellar support if (or when) this eventually happens. They will help you via phone, send replacement parts, or even send a new device, if necessary.

If you’re located in the US, that’s reassuring.

However, if you’re in other parts of the world, where shipping fees and import regulations make repairs complicated, it might make more sense to look for a grinder with a better track record when it comes to durability.

You don’t want to be sending a coffe grinder halfway across the world if you face a problem and be left without an espresso grinder for your morning coffee, right?

On an affordable model like the Sette 30, the gearbox issue is not a dealbreaker.

After all, it’s hard to find entry-level grinder espresso grinders that don’t have some sort of compromise.

However, on the “270 Wi” model, which is double the price of its little brother, it’s an issue. You should be able to expect more at that price range. If you want a grinder that can last you a lifetime, you should probably consider one of the more sturdy Italian brands instead.

All the Sette grinders share the same 40 mm “S1” conical steel burrs made by the Swiss burr manufacturer Etzinger.

The flavor profile for espresso should be more than decent for most people. The shots have plenty of sweetness and nuance, although you miss a bit of that clarity you’d get from a flat burr grinder.

However, compared to many hand grinders and other entry-level espresso grinders, I do think you get good flavors out of the Sette. In addition, shots are rarely astringent, which can be a significant issue with cheaper espresso grinders.

When making espresso, it’s essential not to have clumps in your grinds, and the Sette models create incredibly fluffy grounds, which makes distribution a breeze.

Compared to most other grinders with small declumpers at the exit chute, this is remarkable.

On the Sette, the grounds fall right out of the burrs and into the portafilter.

The design is also why the Sette is one of the grinders with the lowest retention. Having as close to zero retention as possible is ideal when it comes to home espresso.

Zero retention means that you don’t waste any grounds by purging through the previous bean every time you change coffee bean or grind setting.

All models in the Sette-line are calibrated to grind rather fine, and as such, don’t do well when it comes to methods like the French press or drip.

Even the Sette 30, marketed as a ‘jack of all trades’ grinder, doesn’t perform well at the more coarse spectrum of things. I have tried making drip coffee with it, and it’s not something I’d recommend. AeroPress and espresso, yes, but not anything coarser.

(If you’re looking for a grinder that is better suited for coarse pour over 0r French press, then check out the Baratza Encore instead.)

It’s faster than some of the best espresso grinders out there.

Please note that this crazy speed also makes it a very loud grinder. It will wake up any light sleepers in your home.

There has been some controversy with the Sette series in the past. Motors were suddenly breaking down, gears not lasting long, and inaccurate scales. But, by now, Baratza has managed to overcome most of these issues.

At the same time, the new and improved scale in the ‘Wi’ is now delivered by the digital scale experts from Acaia.

Baratza has also worked to develop a new set of softer feet that reduce vibration and improve accuracy with the scale.

However, the gearbox is still made from plastic and that’s still a weak point.

If you live in the US, where service or replacement is fast and easy, you shouldn’t worry too much about this, but people from other parts of the world should be cautious unless they have a shop offering repairs and service nearby.

The Sette is extremely loud. So if you’re sensitive to noise or you share home with somebody who is, don’t get this grinder.

The Sette models have many benefits over the more traditional grinders out there; lightning-quick grinding speed, great fluffy grinds, zero retention, and a compact and attractive design. And that’s why it’s so popular. It’s just very practical in daily use. Especially if you’re planning to be single-dosing. Besides a few of the recent (rather expensive) dedicated single-dosers such as the Niche Zero, nothing really comes close to the Sette-series.

On the other hand, this grinder can run into gearbox/motor problems even with fairly normal use. So you should probably consider twice before buying it, if you’re outside the US, where Baratza’s customer service got you covered.

Given the very different price points of the three models in the series, I’d say that it’s a lot easier to recommend the Sette 30, knowing that the gearbox could fail than the much more expensive Sette 270 Wi.

I also think that single-dosing is much more appealing than weight-based dosing, so again that makes it much easier to choose.

If you’re based in the US and looking for a first grinder to pair with a manual lever machine such as the Flair or an entry level espresso machine, I think the Sette 30 would be your best choice.

Whether you’re looking for a hopper-based grinder or a single-doser, there are some other strong options on the market.

At the higher price point that the 270 and 270 Wi comes in at, you have alternatives, which don’t have any long term issues such as the Eureka Mignon Specialita and the DF64. Both these grinders also feature flat burrs, which many people (including myself) would argue offers superior espresso flavors.

On the other hand, there aren’t any good single-dosing alternatives in the same price range as the Sette 30, making it an attractive option for people just getting into espresso.