You’ll find instant coffee brands that are super bitter and brands that have a silky smooth flavor. Here are some of the more popular ones.

Instant coffee is often ridiculed among hardcore coffee snobs. While it’s not amazing, it’s still better than its reputation.

Personally, I think it’s more drinkable than the alternative:

Stale coffee from a drip machine that hasn’t been cleaned in decades.

I have blind-tasted 10 of the most popular options on the market to find the best instant coffee for you.

I’ll be upfront: many were nasty. But a few stood out!

Read on, to see which brands I recommend.

Behind the test & blind tasting

Each instant coffees was prepared in neutral cupping bowls and evaluated one by one. The cups each had a number assigned for identification.

After the blind test, I performed an un-blinded cupping with the five best-performing coffees to get a more in-depth evaluation of the coffee as it cooled down. The three coffees in the list above are what I’d recommend to most people. 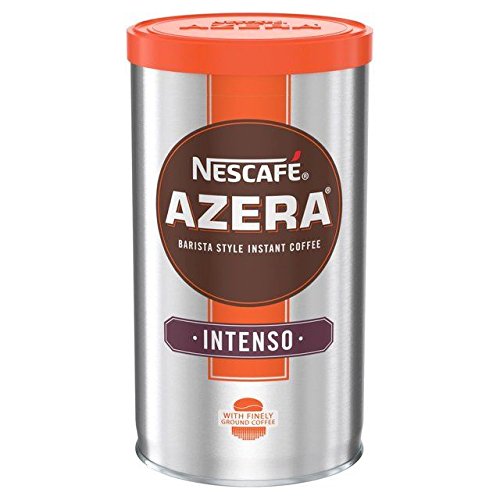 Nescafé Azera Intense was a big surprise to me. Overall, this was the highest-scoring coffee in the blind taste, although some other coffees were close.

I had never heard about this instant blend before, but it turns out that it’s a rather new invention that includes some ultra-fine “real” coffee in the sample. I think that gives the cup a more “realistic” feeling; it tastes less like instant coffee than most of the other ones.

I would classify this as a medium-dark roast with a nice body and balance from a layman’s perspective. This coffee can be enjoyed either black or with milk.

(Among specialty coffee people, however, it would be a quite dark espresso roast)

When I tasted this one, what stood out to me at first, was how well-balanced it was compared to the other samples. It’s less harsh with a more clean and full aftertaste.

Of course, this is not going to replace normal coffee for me, but I can imagine that it will taste just as good as the supermarket coffee most normal people brew at home. 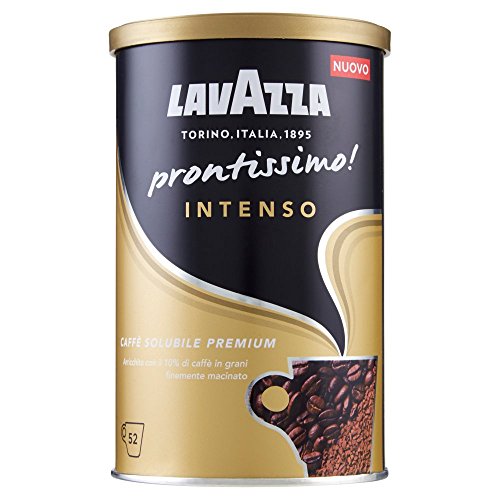 This was another coffee that tasted more realistic to me; again it turned out to have some real coffee powder mixed into it.

This is a super dark roast, though. It tastes like an espresso roast, so if you like that or you take your coffee with milk, then this is a good bet.

This is how I described the blend in the blind test:

“We’re almost into charcoal territory here. We also have some more of those licorice notes, but overall I will say this is not mellow or rich. This is more intense, dark, and burning. So if you’re into that kind of destructive nihilistic coffee philosophy and you just want a really dark roast, then this is it”

For my personal taste, this is too dark, but I could imagine that many people would be into this coffee.

Kenco Smooth lived up to its name. It didn’t really stand out in any noticeable way, but nonetheless, it was decent – and dare you to say – a “smooth” experience.

The roast is medium-dark, but not too dark.

The aftertaste is pretty clean and mellow. It has some of those licorice notes, but besides that, there’s not a whole lot going on. While this might sound like a criticism, I mean it in a positive way. A lot of instant coffees have an undesirable grain/corn aftertaste, but you don’t find that here.

The flavor profile is middle of the road but in a good way. I can see many people enjoying this cup. 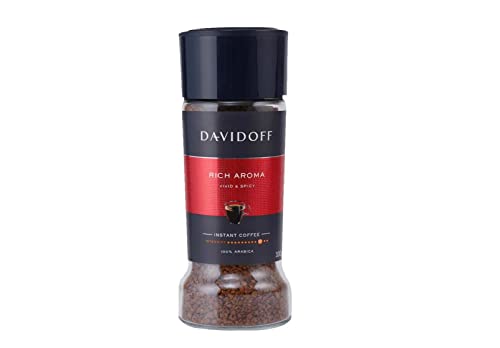 When I did my blind taste I was a bit too harsh on Davidoff Rich. It was the first cup I sampled, so for that reason, my expectations were unreasonably high. On later evaluations, I realized that this is a fine instant coffee. At first sip, it’s a bit like Kenco Smooth; just a bit more complex.

However, as you get to the aftertaste it has more sweetness and even some actual hints of fruit. My guess is that this is a blend of both medium roast and darker beans.

Fruity flavors are of course, very common with light and medium roast specialty coffee, but you don’t really see many instant coffees that try to pull it off. Judging from the other “more ambitious” instants I have tried, it seems like the most difficult aspect to replicate.

In my blind test, I commented that this was average tasting and I still stand by that. However, this is actually not a bad thing.

This is a medium roast, so you do get a thinner body and more mellow flavors compared to the other coffees on this list.

You don’t really get any flavor notes that this indicates that this Ethiopian coffee until it’s cooled down to room temperature. At that point, you actually find hints of thyme and earl grey tea that point to the Ethiopian connection. However, this is very subtle.

What stands out to me about this coffee is that it’s actually a true medium roast with a clean flavor profile. You don’t encounter many instant coffees like that! 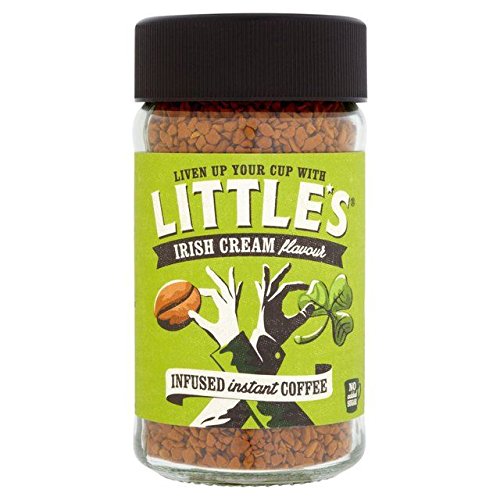 This flavored coffee from Little’s is very unique. The aroma is creamy and boozy in a cheap and cheerful way.

Unfortunately, the cup profile doesn’t quite live up to the promising aroma.

To me, it tasted like wine gums mixed with generic medium roast coffee.

While this sounds bad, it’s actually still a lot more interesting than most instant coffees.

If you don’t like the flavors of dark roasts, and you want something to cheer you up in the morning, then this is a fun one!

The classic profile from Nescafé only got 1 star in my blind test.

This is how I described it:

“This is the kind of coffee I would imagine could have some low-grade Robusta in it as well. It’s definitely not 100% arabica.” 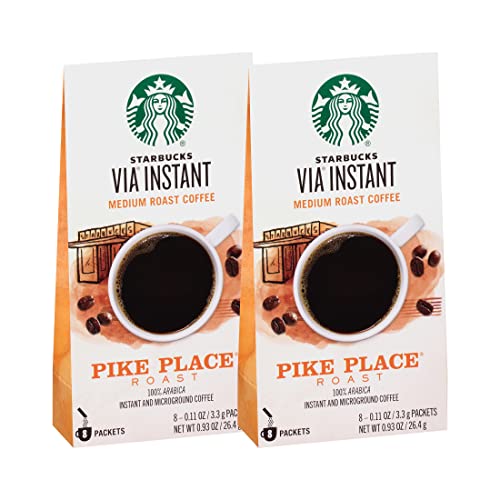 I didn’t enjoy this coffee from Starbucks at all. At the same time, it was actually one of the most expensive coffees in the line-up.

This was my comment on the aroma and flavor:

“It’s a little bit like a used kitchen cloth.”

Of course, Starbucks is famous/notorious for roasting really dark, but this was more than I had expected.

“This is basically like drinking charcoal soup. Charcoal essence. Yeah, the aftertaste is just very astringent, very bitter, this one almost hurts a little bit in the throat,” was my reaction after blind tasting it.

Unless you really like charcoal I wouldn’t recommend this one. 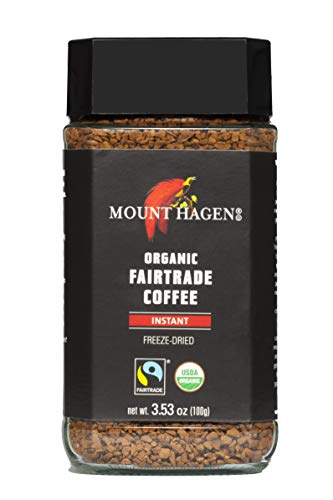 I had high expectations for Mount Hagen. The name and logo evoked a certain old-world seriousness, and the fact that it’s organic and fair trade also shows some ambition.

However, when I tasted the coffee blind, it was a disappointment. Here’s my reaction.

“It kind of reminds me of a barbecue rub. It’s kind of roasty and then it goes into some kind of spice territory. I get a little bit of X-Factor wildness to it. But to me, it just tastes more like smoke than coffee. So yeah, if you’re after coffee flavor then maybe this is not the best one to go for.”

The fact that Mount Hagen is also rather expensive is another argument against it. 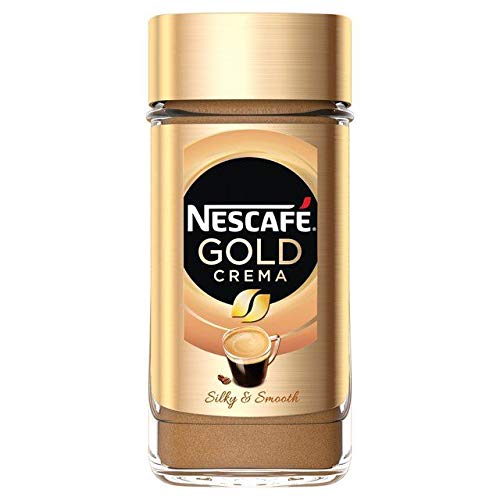 This was another disappointment. I thought Nescafé were pioneers in this area, but this performance was pretty poor.

First impression: It smells like coffee from a vending machine!

Second impression: It’s full-bodied, but not in a rounded way. It’s got that sharp licorice/anis flavor. Definitely not chocolate. It could have some robusta.

Conclusion: I don’t really enjoy it, so I’d recommend one of the other options on this list.

WHAT TO LOOK FOR?

Choosing among the best instant coffee brands takes some due consideration on your part. As you can see, each of our top picks is slightly different than the other. Here are some aspects you ought to factor in while you’re settling on the one that suits your needs the best.

Robusta or Arabica coffee beans make all instant coffees. Arabica has a recognizable smoother taste with more layers and it is slightly sweeter. Most people usually go for the Arabica bean-based instant coffee for its overall superior quality.

The roast of the coffee can be light, medium, or dark roasted. However, in reality almost all instant coffee is somewhere from medium to extremely dark. The more roasted, the more intense the flavor. The instant coffee’s packaging displays its roast so you can choose the intensity more fitting for your taste. If you’re trying to make the best instant espresso, you should go for a darker roast packet.

Instant coffee is supposed to be convenient to make and drink. The container your favorite coffee comes in has to make it easier for you to make your morning cup of coffee with as little hassle as possible.

While instant coffee will probably never reach the same level of deliciousness as manual brewed coffee, there are still many interesting options on the market today. If you’re too busy (or lazy) to go for a regular brew, one of the options in our guide might make your morning a tiny bit more comfortable.