Brazilian coffee has always been about quantity. But there are signs of change for the world’s biggest coffee producer.

However, quantity and quality are two entirely different things, and if you mention Brazil to a real coffee snob, he'll probably roll his eyes and give you that condescending hipster smirk.

Brazil is a contentious coffee country, and a lot of people feel that coffee from this vast country is overrated.

In this article, I'll take a close look at the good, bad and ugly and tell you everything you need to know about Brazilian coffee.

If there is one country in the collective psyche that encapsulates coffee, it’s Brazil.

“Way down among Brazilians,
Coffee beans grow by the billions,
So they’ve got to find those extra cups to fill.
They’ve got an awful lot of coffee in Brazil.”

In 1727 Sergeant Major Francisco de Melo Palheta went to Cayenne in French Guiana to help negotiate in a land dispute.

However, instead of doing diplomatic work, he seduced the wife of the local mayor.

In return, she gave him a coffee seedling hidden in a bouquet on his departure, and that’s how coffee came to Brazil.

Palheta brought the plant with him back to the Northern Brazilian state of Para, but it wasn’t until the plant made it down South close to Rio de Janeiro and Santos (the harbor town of Sao Paulo) that it started to thrive.

In 1830, around a hundred years after its introduction, Brazilian coffee had become a success story and was responsible for a third of the global production. 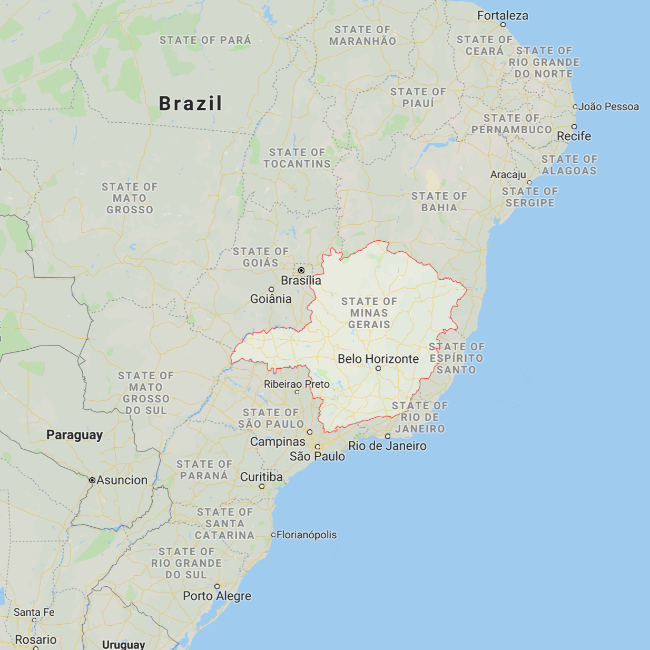 Why is Brazil coffee famous today?

Due to slave labor and an aggressive, industrial approach to farming, the production increased rapidly, and Brazil became the largest coffee exporter in the world.

In 1888 slavery was abolished in Brazil. It was feared that this would lead to a decrease in coffee production. However, the opposite happened thanks to government involvement and increased immigration.

The coffee production in Brazil continued, and in the early 1900s, there was Brazilian coffee in four out of five cups consumed worldwide. (Source)

What happened in Brazil had a significant effect on not only the global coffee trade but also on the evolution of coffee consumption.

The cause and effect also went the other way; coffee production has shaped the Brazilian landscape, agriculture, and society as a whole.

Is Brazilian Coffee Good or Overrated?

From the get-go, Brazilian coffee was all about scale and quantity; grow a bunch of coffee and harvest it efficiently.

It’s not surprising that this approach leads to a lower quality of coffee.

These are some typical traits of the coffee production in Brazil. If you know anything about coffee, you’ll instantly realize that this is counterproductive from a quality stand point.

Another thing that is unique to Brazilian coffee is the processing method: the pulped natural method.

In other parts of the world, coffee is typically either wet or dry processed. These methods tend to create more exciting flavor profiles: either very clean and acidic or extremely fruity and fermented.

The pulped natural method (or honey process as its referred to in other countries) lets the coffee seed dry with the mucilage still on the bean. This enhances sweetness, which does make up for some of the other drawbacks in the production line.

Typically, beans from Brazil have flavor notes such as chocolate, hazelnut, and caramel. Often it’s a low acid coffee. It’s good without being exciting, as opposed to the more subtle coffees from East Africa or Central America.

This kind of coffee has given birth to the Italian espresso culture and much of modern coffee.

Since the majority of coffee available back in the postwar world was this cheap Brazilian stuff; naturally, the baristas adapted and tried to make the most of it.

When you make espresso, all flavors are compressed and intensified. For that reason, a sweet and nutty Brazilian, that would taste rather boring as a filter coffee, can perform well as a coffee bean for espresso.

Brazil also growns large quantities of the notorious Robusta species. It’s simpler to take care of  than Arabica, and also has more caffeine and crema while being cheaper. For those reasons, it’s often added in the espresso blend.

A typical Italian espresso blend would be something like 70 % Brazilian pulped natural, 15 % robusta, and finally a dash of Central American coffee to add some spice to the blend.

It tastes decent as espresso and works great as the base of a cappuccino. But today most coffee snobs have higher demands and more discerning taste-buds.

When the specialty coffee movement started to get momentum at the beginning of this millennium, much of the emphasis was on unique flavor notes as well as acidity.

Since Brazilian coffee is rarely grown at high altitudes or processed in a way that promotes these attributes, it has been pretty rare to encounter single origin coffee intended for manual brewing. In recent years, Brazilian coffee has remained a cheaper ingredient for espresso or been a filler in bland supermarket blends.

However, Brazil is a vast country with an advanced coffee industry, so obviously, there are exceptions to this rule. The 2018 Brewers Cup champion, Emi Fukahori, finished number one using a bean from the distinguished Brazilian coffee farm, Daterra.

This is what the famous English barista and coffee roaster Maxwell Colonna-Dashwood noted about his visit at Daterra:

“During my visit to the Daterra farm in the Cerrado region, not only was I very well looked after but I was blown away by the technology the farm had and the ability of that technology to improve the quality of sorting and processing. The owners had a bespoke sorting system that separated the cherries by ripeness based on pressure and LED sorters that scanned thousands of beans per second.” (source)

Brazil has become more affluent in recent years. Combined with the technological know-how, the 6th largest population in the world, as well as a considerable domestic coffee culture, I think it’s safe to say that we will see a new generation of quality-focused and proud Brazilian coffee farmers in the future. But the keyword here is “future”. The quality focused producers are still just a tiny drop in the gigantic ocean.

Historically, much Brazilian coffee has been sold under the ‘Santos‘ name. However, this doesn’t say anything about quality; it’s just the name of the harbor town near Sao Paulo.

Usually, the high-quality stuff will have the name of the farm (called Fazenda) mentioned on the package.

However, because Brazilian farms tend to be enormous, the same farm will produce both good and bad stuff.

As an example, some of the more bland specialty coffee I have encountered has been from the abovementioned Daterra farm.

The typical varieties of arabica in Brazil

Coffee is grown in the Eastern part of the country; from Bahia in the north; all the way to Parana in the South. The most famous area is perhaps the state Minas Gerais and its Cerrado-region where the altitude averages around 800-1300 meters and the seasons are clearly defined. Around half of the total coffee, production hails from this state.

Espírito Santo is the second-most prominent state, but robusta (often called conilon) accounts for a significant part of the production here.

Yes, there is a lot to say about Brazilian coffee. But at the end of the day, Ol’ Blue Eyes said it pretty well in his coffee song from the forties: There’s an awful lot of coffee in Brazil!