Coffee from Sumatra is a unique experience. But it’s not for everybody. In this article, I take a close look at the details of this idiosyncratic bean.

Licensed Q Arabica Grader, M.A. Journalism
August 1, 2022
Sumatran coffee is legendary. It's one of the first places coffee was grown on a large scale.

It’s a bean that packs a punch; it usually has body, depth and a certain kind of 'earthy' flavor Many people love it, but some also despise it.

I went on a trip to the Indonesian island recently to learn everything about how Sumatran coffee is grown and processed.

Read on, if you want to understand why this particular bean is so unique.


Where is Sumatra coffee from?

Sumatra is a part of Indonesia. It’s the 6th largest island in the world and home to more than 50 million people. Along with Borneo and Java, it is one of the three main islands comprising the country.

Coffee production on the island of Sumatra is thought to have begun around 1884, near Lake Toba, which is the largest volcanic lake in the world.

I went to Sumatra recently, and I have to say it’s one of the most interesting places I have ever visited. The people are warm, and the cuisine is excellent. If you want to see a coffee farm in real life and have a wonderful vacation, I highly suggest going there. Especially, Lake Toba was a highlight.

Bonus-Info: mystical historical events surround Sumatra and Lake Toba. A volcano erupted around 75.000 years ago in a so-called super-volcanic eruption. Speculation suggests that this lead to mass extinction of humans in the area and a global climate change.

What is Sumatra Coffee? A bit of History

As you might know, Indonesia and coffee have a long history. Initially, coffee grew wild in Ethiopia, but via Yemen, the Dutch colonialists brought the plant to Indonesia in 1699.

Here it thrived, and Indonesia quickly became the largest coffee producing nation in the world. The coffee was exported from Jakarta on the island of Java, and that’s how Java became known as the best coffee in the world for a period in history.

This isn’t that strange since the bags the coffee was packed and exported in all said ‘Java.’ A bit like how tissue is often called a Kleenex, even though it’s a brand name.

There are many myths surrounding coffee; especially, from the traditional regions. For that reason, much Sumatran coffee has been sold under the name ‘Mandheling‘ (or ‘Mandailing’).

But in fact, the name refers to a tribe living in Sumatra, and not a special kind of coffee. Today the term is pure marketing BS . Like Kenyan AA or Kona coffee it’s just a name with no real meaning. 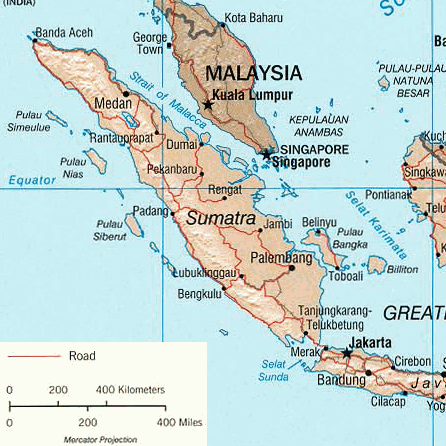 Is Sumatra coffee lower in acid?

Coffee from Sumatra is known for being low acid coffee. There are several reasons that this is the case, but the way the local farmers process the coffee is the most important one. The process is known as wet hulling or ‘giling basah’ in the local language. It’s a more crude and random way to process the cherries compared to the washing method popular in Latin America.

When the coffee cherries are picked, they are depulped right away. The depulping is often extremely crude and old-fashioned. When I was in Sumatra, I saw old ladies using a big wooden pole as a kind of mortar and pestle to remove the husk.

The seeds – what we know as ‘the beans’ – are then put in a large plastic sack and left to ferment over the night. The next day the remaining pulp is removed by hand, and the beans are left to dry on a patio.

Soon after, a middleman will show up and buy the beans, and then he’ll take them to a warehouse and remove the parchment layer, and let them dry further before the export.

The processing changes the flavor

Compared to coffee that is washed at a station and dried more carefully, this leads to a more earthy and less acidic taste. The body and mouthfeel are enhanced, but the subtle notes of stone fruit and berry are muted.

For many coffee buyers, especially in specialty coffee, this means that Sumatra coffee isn’t that appealing. However, many old-school coffee drinkers appreciate a dark and brooding character when it comes to coffee.

I spoke to a coffee professional in Sumatra, who told me that it’s essential to roast Sumatran coffee within three months of harvesting. Because of the crude processing, the green beans have a shorter shelf life than regular coffee.

However, not all Sumatran beans are wet-hulled. When you do encounter beans from the island that are either washed or dry processed they often taste magnificent and have a pleasant acidity. In fact, they are up there with Colombian coffee.

Is Sumatra a dark roast?

A lot of people think that coffee from Sumatra is necessarily a dark roast, but location and roast profile doesn’t have anything to do with each other. It’s up to the roastmaster how he wants to roast a certain bean. In your case, this probably means your local coffee company or artisan roaster.

However, many people expect Sumatran coffee to be full-bodied, rich and low in acidity, so that’s what many roasters choose to go for when they select a profile.

Starbucks buy up huge amounts of Sumatran coffee and roast it quite dark to use it as a base in their espresso blends or as a single origin. This might be what has given birth to the idea of a somehow darker than usual ‘Sumatra roast.’

But if you expext all coffes from Sumatra to taste similar to what Starbucks is offering – you’ll be disappointed. Or maybe pleasantly surprised.

Types of coffee grown on Sumatra

There’s a wide range of coffee produced in Indonesia. This is due to the long history of coffee here, compared to most other places.

Indonesia also grows enormous quantities of robusta coffee, but this kind is usually found at lower altitudes and is used for instant coffee or consumed domestically. This kind of coffee is cheap, but frankly, it tastes so harsh that it won’t be of any interest to the average Western coffee drinker. Trust me on this one!

The Coffee Chronicler’s Verdict: Every coffee drinker should try a single origin Sumatra coffee at least once. Since Indonesia is such a significant producer as well as an important coffee country historically, we owe it to the coffee gods. If you’re a third wave coffee drinker, you should seek out a one of the premium washed coffees from Kerinci, Lintong, or Lake Toba, and I’m sure you will have an amazing experience.

How is Sumatra Coffee Made?

Coffee from Sumatra is usually wet hulled. This gives the beans a different flavor and reduces acidity. In the article, I explain exactly what this means.

Is Sumatra Coffee a Dark Roast?

No, this is entirely up to the roastmaster who’s roasting the beans. It can be light, medium, or dark.

However, quite often Sumatra is on the darker and more full-bodied side.

Is Sumatra Coffee Low in Acid?

Yes, as a rule of thumb, Sumatra coffee is less acidic than coffee from Africa and Latin America. There are many reasons for this; the main one is the unique processing method that farmers employ after harvest.

How Much Caffeine in Sumatra Coffee?

Coffee from Sumatra is mostly from the arabica species. This means that the caffeine level is pretty standard. Arabica coffee has less caffeine than robusta, but on the other hand it tastes better.

How is Sumatra Coffee Made?

Coffee from Sumatra is usually wet hulled. This gives the beans a different flavor and reduces acidity. In the article, I explain exactly what this means.

Is Sumatra Coffee a Dark Roast?

No, this is entirely up to the roastmaster who’s roasting the beans. It can be light, medium, or dark.

However, quite often Sumatra is on the darker and more full-bodied side.

Is Sumatra Coffee Low in Acid?

Yes, as a rule of thumb, Sumatra coffee is less acidic than coffee from Africa and Latin America. There are many reasons for this; the main one is the unique processing method that farmers employ after harvest.

How Much Caffeine in Sumatra Coffee?

Coffee from Sumatra is mostly from the arabica species. This means that the caffeine level is pretty standard. Arabica coffee has less caffeine than robusta, but on the other hand it tastes better.