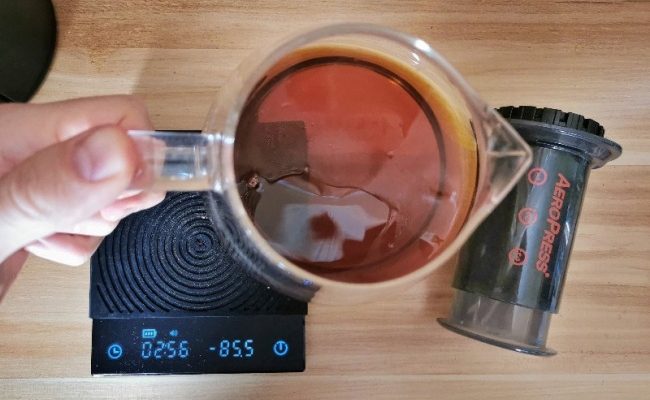 Here’s everything you need to know about coffee to water ratio and how it can help you brew a delicious cup.

How much coffee? How much water?

That’s the most basic question in the world of coffee brewing. Or it should be.

In this article, I’ll give you a short and straightforward answer, AND a long and complicated one for all my lovely geek friends 🤓

Why use a brew ratio?

Why do coffee people talk about ratios instead of recipes?

It’s because you can scale it up and down quickly. It’s just practical.

Another benefit is that they work whether you use grams or ounces.

You just need a precise digital scale, and then you can easily follow a ratio. Of course, you do need a bit of math, but honestly it’s elementary school level.

The most famous ratio is the so-called Golden Cup Standard. It was formulated by professor Lockhart from MIT back in the 1950s. (1)

The ratio is not based on chemical principles; rather it was created by surveying people’s preferences.

The simplified version that people like to bandy around states that you need 55 grams of coffee per liter of water. This amount translates into a brewing ratio of 1:18. For one unit of coffee, you need 18 units of water.

The ratio has since been backed up by studies by the Specialty Coffee Association.

The 1:18 ratio is often quoted, but I would argue that it’s an oversimplification.

If you look closely at SCA’s paper, you’ll see that it says plus or minus 10%. 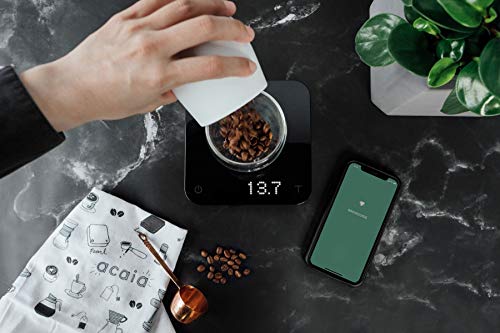 In fact, The Golden Cup Standard talks more about the extraction and brewing process, rather than proposing a specific ratio.

The quote below is copied directly from the whitepaper:

“Coffee shall exhibit a brew strength, measured in Total Dissolved Solids, of 11.5 to 13.5 grams per liter, corresponding to 1.15 to 1.35 “percent” on the SCA Brewing Control Chart, resulting from a solubles extraction yield of 18 to 22 percent*” . (2)

Check out my post about coffee subscriptions for more inspiration!

The problems with the Golden Cup Standard

While I don’t personally have any problems with the Golden Cup Standard, it’s simply not useful for ordinary people.

A ratio like 1:18 can be delightful if a skillfull barista is responsible for the brewing.

But that’s presuming access to the right water, the right grinder, good coffee, and the right pour over technique.

How many people in the world live up to those requirements? My guesstimate would be about 0,2 % of all coffee drinkers.

For these reasons, the ratio makes more sense in a coffee lab, where subjects taste a little sample, than in the real world. 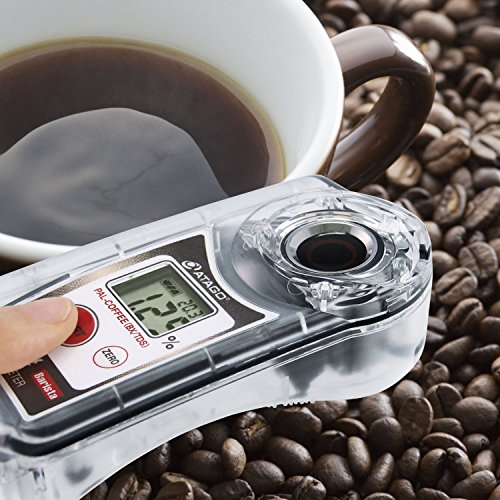 Do you have one of these at home? Most people don’t

What is the best coffee to water ratio?

So now it’s time to get concrete. What’s really the best brew ratio, you may ask?

What do I recommend?

It depends on a lot of things. Here are my general guidelines:

A lot of these things also depend on habits and personal preferences. Today I prefer coffees at 1:16 ratio because I have had a lot of experience tasting specialty coffee from all parts of the world. I find that this strength gives the most balanced representation of the unique characteristics of a given coffee.

However, if I’m brewing a cup of coffee for somebody without the same frame of reference, I’ll change my approach.

My old uncle from the rural part of Denmark doesn’t know anything about micro-lots from Yirgacheffe or fancy flavor notes, so you can be sure that I’ll increase the dose significantly if I ever have to brew for him.

In fact, most people outside the relatively narrow circles of specialty coffee, prefer strong brews with viscosity and mouthfeel. Nothing wrong with that. So if that’s you, just brew a bit stronger.

The idea that a particular coffee to water ratio is the best is rather naive when you start to think about it because it doesn’t take into account the grind size of the coffee and the efficiency of the brewing.

To be more precise, you have to look at something called TDS or ‘total dissolved solids.’ This fancy name accounts for the amount of coffee that has been extracted from your grounds and made its way into the final beverage. It’s the scientific way of talking about ‘strength.’

Let me repeat in layman’s terms: You can get the same strength of coffee, whether you use four spoons or five spoons.

However, the more you extract from the coffee, the more likely you are to get undesirable flavors. The SCA recommends an extraction yield between 18-22 % of the coffee into the final cup. Maybe that sounds very precise, but actually, it’s a pretty wide window.

I tend to like coffees with a higher TDS and a lower extraction. I find that this enhances floral notes while minimizing bitterness. As a logical consequence, I have to stay at the top end of SCA’s recommended specs. I can achieve this by using coarser grounds and a ratio of 1:15.

It’s a bit like when you’re brewing tea. If you just let the tea bag steep for a few minutes, it will taste fine. If you forget to take the teabag out of the cup and come back a few hours later, the liquid will have extracted some nasty flavors. The amount of total dissolved solids will be higher. At some point, the dissolved solids don’t taste good anymore. You only want to extract the good stuff.

The same thing happens to coffee if you go above a certain point. With coffee, we usually control the extraction with coffee to water ratio and grind size, but there are other tools available, making it even more complicated than tea:

There are some interesting exceptions to all the things we have just discussed. When it comes to immersion/infusion brewing methods, the way, you calculate strength is different from drip coffee or pour over.

At first glance, it seems that French press or other types of steeped coffee are more efficient than drip coffee. But this isn’t the case. Actually, it’s the opposite way around.

So if you use 1 oz of coffee for your brew, 2,2 oz of water will be absorbed by the grounds. That means that the water will not be a part of the cup of the batch you just brewed. As a result the concentration of extracted coffee compounds will be higher if all water was still a part of the final brew.

When you brew French press, however, the liquids retained in the grounds stay with the brewed coffee.

As a result, you have to up your dose accordingly. For that reason, you should use a 1:14 brew ratio for your French press. Something like 71 grams of coffee to 1 liter of water will likely work for you.

For a standard 32 fl.oz French press that’s around 2,32 oz of coffee (but use a scale instead, and switch to grams since that’s going to be a lot more precise)

Espresso is another notable exception. With all other coffee, we talk about the amount of water used in the preparation. When it comes to espresso, we only talk about the weight of the final beverage. When we say 18 grams in, 36 grams out, that’s a 1:2 ratio in the world of espresso.

The reason for this is simple. In most machines, it is pretty difficult to say precisely how much water was used in the brewing process. It’s easier to weigh the coffee cup and see how much liquid is in it.

Coffee professionals simply know that the way to calculate espresso ratios is different, so it’s not a problem.

Again, hardcore espresso geeks pay more attention to the total dissolved solids and the extraction yield, rather than the brew ratio.

However, brew ratio is a quick and convenient way to communicate something about an espresso shot. A 1:2 shot is typically thick and sirupy while a 1:3 can showcase more finesse and nuance.

FAQ – how many grams of coffee per cup

It’s difficult to say how many grams of coffee you need, since cups come in all different sizes.

But instead of using of using spoons and cups, which is extremely unreliable, I’d suggest simply using a digital scale to weigh the coffee and the water, and opt for a 1:15 ratio of coffee grounds to water.

How many scoops of coffee for x cups?

Below are some rough guidelines if you’re using various coffee makers and for some reason still don’t have a scale:

How do you calculate coffee to water ratio?

To figure how much coffee you require for an ideal volume, simply look at the ratio and then miltiply the number. If you follow a 1:15 ratio, and you have 20 grams of coffee, you’ll multiply that with 15: This will then give you 300 ml’s of water.

How much coffee do I use for 4 cups?

How much coffee for 6 cups?