My Opinion: The Best Way to Make Coffee at Home

Different coffee brewing methods ranked and rated. Plus, an explanation of why you shouldn’t make espresso at home.

Coffee grounds and water. You mix the two and boom; you have some delicious brown stuff that helps you wake up.

It should be simple, right?

There’s an almost endless stream of possible ways to make coffee. And new methods keep getting invented, too.

(Crowdfunding has removed the barrier of entry to aspiring coffee inventors, which is the reason we see so many new gadgets these days)

I like a lot of the new stuff — but let’s be honest; most of these coffee gadgets aren’t essential the same way as the trusty, old classics who have proven themselves over time.

In the following, I’ll rank and review the different ways of making coffee at home, and give you my personal no-BS take on each of them.

The 5 best ways to brew coffee at home

Pour over coffee is an antique technique, dating back to Melitta Bentz’ first prototypes more than hundred years ago.

Pour over aka hand drip coffee has had a huge renaissance in recent years.

It all began when Hario V60 suddenly came from out of nowhere, and became the brewer of choice in many specialty coffee shops in the US and Europe.

While the West had largely dismissed the minimalist pour over approach, it had flourished and developed in Japan, where Hario is from.

Since then many other Japanese brands have entered the market and cut out a slice for themselves: Kalita, Origami, Cafec, Munieq, and Kono just to mention a few.

Pour over coffee seems simple and straightforward, which it also is to a certain degree, but at the same time, it has the potential to be a complicated and nuanced brewing method.

If you ask me, it’s not just hype. Pour over coffee is my brewing method of choice, period. And I think it should be for most people.

I find that this is the best way to express a given coffee bean’s true identity. You get mouthfeel, sweetness, acidity, body, and aftertaste with this brewing method.

→ See my guide to pour over coffee here or check the video below, where I share my method.

At the same time, it’s relatively democratic in the sense that it’s affordable enough that most people are able to invest in the necessary equipment (a dripper, a cheap digital scale, plus a gooseneck kettle, and you have the basics covered).

Also, the techniques are a lot more simple than something like espresso, which can take years to master.

Pour over coffee has become extremely popular, and there are good reasons for that. If you haven’t tried it out yet, I highly suggest getting a cheap plastic V60 so that you can join the club.

The Aeropress was launched in 2005, and now, 15 years later, it’s hard to imagine a coffee world without this little efficient coffee brewing companion.

At first, most people thought the Aeropress was a toy. After all, it was made by Aerobie, a company that previously only made flying discs.

But slowly, the Aeropress grew into a cult classic with its own world championship.

The good thing about the Aeropress is first and foremost convenience. It’s swift and easy to brew on. Cleaning is super simple.

The second upside is the compact size. With the new travel version, the Aeropress Go, this aspect has been further developed. If you want to brew coffee on an airplane or when you’re out hiking, you can do it with this device. 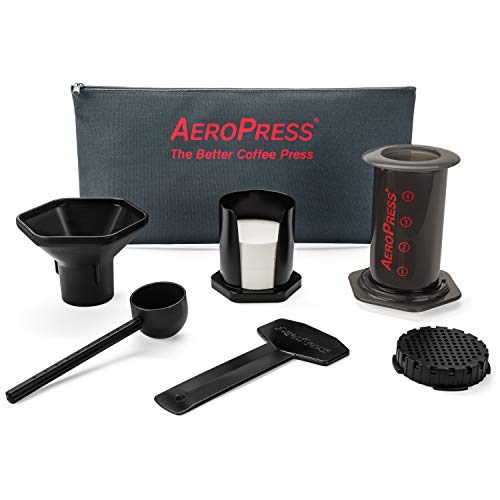 What the real geeks soon realize, however, is that it’s fun to brew with the Aeropress. You can literally try thousands of different recipes and still get excellent results.

You can make everything from espresso-like shots to iced coffee and cold brew with this device.

(Humblebrag: If you want to tap into the full potential of the Aeropress, be sure to check out my mammoth-guide)

The French Press is one of those classic brewing devices that everybody must own sooner or later. It’s cheap and straightforward, yet still exuberates some sort of European Old World charm.

I have mixed feelings about the French press. On the one hand, I love that it’s a no-frills brewing device that doesn’t claim to be more than it is.

On the other hand, it’s infrequent that people know how to brew with this device. Often it hasn’t been adequately cleaned, which adds some flavor taints to an already underwhelming cup.

If you want to make good French press coffee, it is technically possible. Be meticulous with the cleaning, and pay attention to grind size and turbulence, and you’re already half the way.

With the French press, you want a robust and full-bodied cup of coffee, without getting any sediment into your cup. It’s a balancing act that can be difficult. 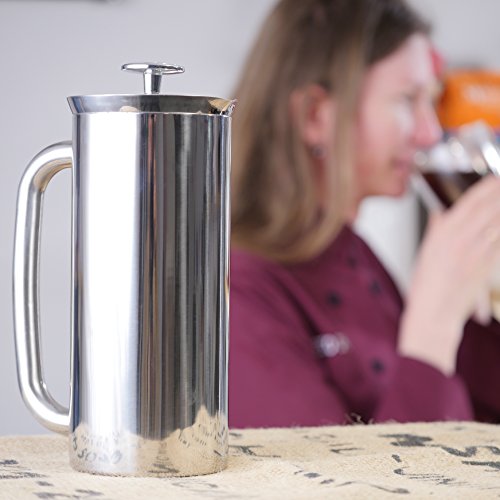 However, if you love a thick cuppa Joe with a real caffeine punch, then this is one of the best ways to achieve it.

The French press relies on a mesh filtration-screen, which allows a lot of lipids to enter the cup. This makes it less vibrant and clean flavor-wise, but you do get more of that oomph that so many people crave.

You also get the convenience of being able to brew relatively big batches at the same time. The biggest models typically have a capacity of around 12 cups, which translates to 51 ounces/1,5 liters.

→ See my guide to the French press here

This one doesn’t need much of an introduction since it’s your classic drip coffee maker from your childhood.

The good things about this class of coffee brewers are apparent: You can brew big batches without being involved in every little step of the process. Just add water and grounds; then press a button.

If you like the convenience and typically brew vast quantities of coffee at the same time, then look no further.

Compared to the French press, you get a taste that is a bit more refined and subtle due to the paper filtration. 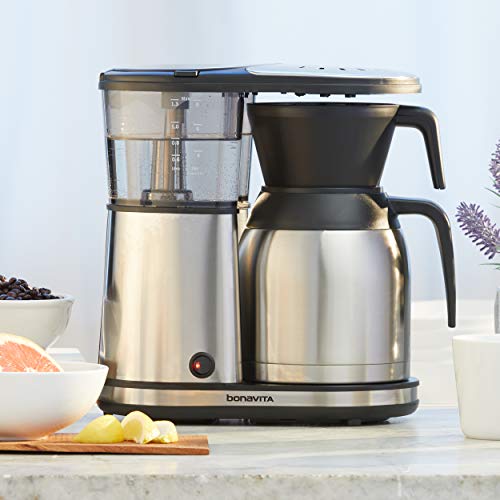 → Looking for a drip coffee maker? Check out, these models approved by the SCAA here.

Drip coffee makers aren’t as exciting and sexy as the manual pour over coffee makers, but many of the same principles and techniques also hold true with an electric coffee machine.

If you use pre-rinsed bleached filters, soft water, and high-quality beans, there is nothing to hinder you from getting a tasty cup.

If you want to be fancy, you can even get a machine that has a preinfusion step to help the extraction.

This is another one of those esoteric Old World coffee makers. The Bialetti Moka pot is the quintessential stovetop coffee maker. Its design goes back to 1933, yet it still feels modern and fresh, somehow.

Brewing on “la Moka”, as it’s called in its native Italy, is almost like a tiny spectacle in itself: the small crema-colored bubbles that form when the vaporized water finally comes out through the fountain, followed by a sudden outburst of scalding hot coffee.

If you’re into this kind of compressed and robust coffee, look no further than the stovetop coffee maker. 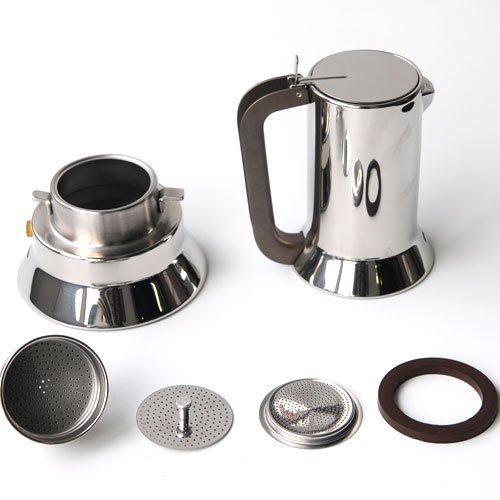 The brewing in itself isn’t difficult when you have learned how to do it. Typically, it’s straightforward since there are no scales or measuring scoops involved. Just fill the water up to the security valve, and fill the reservoir with coffee.

It’s not the most accurate way to make coffee, but it gets the job done.

Between you and me, I must admit that I view this as a poor man’s espresso machine, but that being said, it is a good compromise of price, performance and ease. If you don’t want a new hobby, but just want a damn strong coffee, this probably makes more sense than going down the deep home-barista rabbit hole required when getting a genuine espresso maker.

Espresso has previously been seen as the best way to brew coffee. It somehow seems more sophisticated and better than the rest.

Espresso is indeed more challenging to brew. It’s also by far the most expensive coffee brewing method. Not only are the machines rather pricy, you also need a grinder capable of producing the ultra-fine particles required for a condensed coffee puck.

At the same time, espresso is kind of a wasteful way to brew coffee compared to, say, drip.

A double espresso shot typically follows an ’18 gram in; 36 grams out formula.’ That’s a lot of grounds with a meager result.

I love espresso; don’t get me wrong. I just don’t think it’s the best way to make coffee at home. Go to the local coffee shop, when you crave a shot. Espresso at home just isn’t worth the effort.

Compared to all other forms of coffee, espresso takes more mental energy and effort. For that reason, it’s better left to the professionals.

Sure, if you’re looking for a new hobby, you could get into espresso. But we’re talking about a level of dedication and financial investment, that will probably be on par with making your own gelato or brewing India Pale Ale in the basement.

→ Learn How to Make Espresso at home

Every year, way too many people buy an espresso machine that will just end up collecting dust in the corner. I don’t want you to be part of that depressing statistic.

Oh, I even forgot to mention that espresso machines tend to be fragile creatures that tend to break down sooner rather than later

Conclusion: The best Way to Brew Coffee at Home

As you might have guessed, I’m a huge proponent of the pour over method. I think you get the best combination of flavor, ease of brewing, and affordability.

But I realize that it’s not the best solution if you’re brewing coffee for many people at the same time.

For those occasions, I’d suggest that you have a backup drip coffee maker or French press. This won’t ruin you, and you can use all the same tools to brew with your backup-brewer.

I truly believe that coffee can be cheap and delicious at the same time. In fact, if you have the choice, it’s often better to spend money on the coffee beans, rather than the brewing equipment.

What are the best methods for brewing coffee?

Pour over coffee and espresso are the two most popular methods among coffee aficionados at the moment. However, in terms of convenience, I don’t recommend espresso making at home because it’s so difficult and time consuming.

How can I make coffee taste better at home?

Here are some tips: Clean coffee machine and do a test run. Try using cold water and check the temperature, Next, try using filtered water. Make sure the beans are fresh and store them properly. Lastly, try other coffee beans.

Is Aeropress better than French press?

In many ways, an AeroPress is more similar to an espresso machine because it relies on pressure to extract flavor whereas a French press doesn’t. Fine grounds sought to be utilized with an AeroPress for the best outcome. In my opinion, it’s a better and more modern way or brewing compared to the French press.