Is the Dual Boiler still going strong a decade after its birth? In this review we’ll take an in-depth look at the top device from Breville.

The Breville Dual Boiler occupies a strange place in the word of espresso. For a decade, it’s been the pinnacle of espresso maker technology.

And in a sense it still is today.

However, there’s also something slightly mundane about Breville espresso makers.

So how do we reconcile these differences? This is what this review is about. I have been using the Breville Dual Boiler espresso machine for over half a year, so I’m ready to tell you all about the pros and cons. 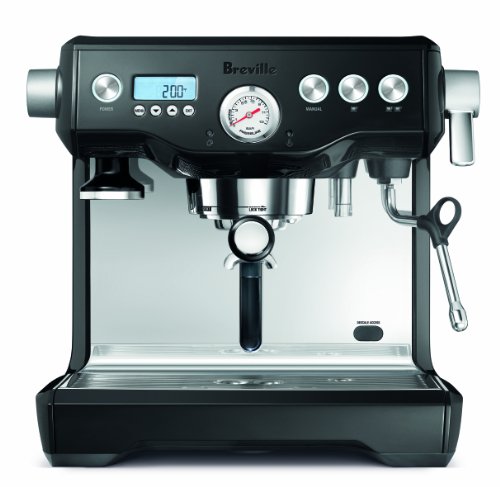 Breville is an Australian company that makes kitchen appliances. Their products include coffee machines, juicers, bread makers, slow cookers, blenders, pizza ovens, etc. They are also one of the biggest manufacturers of home espresso makers today.

However, due to trademark issues, the company operates under the name of Sage in Europe.

Breville is sometimes accused of making cheap, low-quality products, but I think this is a slightly unfair criticism.

Especially when it comes to the product we’re talking about in this review. The Dual Boiler is in a class of its own out of all the company’s coffee products.

That being said, Breville can sometimes engage in some slightly annoying business practices. For example, I have previously complained about missing or sold-out spare parts (Breville Precision Brewer) and the discouragement or difficulty of user repairs (Breville Bambino Plus).

However, the Dual Boiler is an exception when it comes to all these criticisms. Many parts used, such as o-rings, are standard sizes so that most technicians (and savvy owners) can perform repairs and maintenance. With proper care, this espresso maker could last for many years.

I actually picked up my unit second hand, and even though it has seen some use in the last 4-5 years, I’m not overly worried about longevity.

Why should you get a Dual Boiler?

Dual boiler espresso machines use two different water boilers that each have their own heating elements: One for espresso and one for steaming. This allows the machine to heat up to two different temperatures simultaneously.

The result is much more temperature control throughout the entire brewing process since you don’t have to purge water or wait for heating or cooling when going from brewing to steaming. Or vice versa.

Actually, you can steam while you brew!

(Although this is something I don’t practice, since I want to control my espresso ratio manually and observe the pressure gauge and flow).

If you have ever used a single boiler machine, you know how frustrating this can be. (Read about my trouble with the Gaggia Classic Pro here.)

Getting a single boiler to the right temperature is tedious, especially if you’re making more than one drink.

Why is the Breville Dual Boiler so talked about among coffee geeks?

Well, it boils down to (pun not intended!) the fact that it’s probably the most advanced and consistent machines you can get if we do not include expensive high-tech gear such as the Decent espresso maker and specific commercial machines.

When it comes to aspects such as preinfusion and temperature stability, the level of precision is just extraordinary.

Most traditional dual boilers are of the Italian type, which means enormous slabs of steel and the famous E61 group head.

The Breville Dual Boiler has its group head design, which is more modern than the ancient Italian version.

Bonus Info: The E61 was invented in 1961, so obviously, we have better technology nowadays.

This means that Breville has put in a PID-controller controller both in the boiler and the brew head. The result is that the temperature is always the same as you select on the LCD.

This might sound like a basic feature, but it’s not. Most home espresso machines have some temperature instability, making it challenging to pull consistent shots.

The low-pressure preinfusion system is the second feature that makes the Breville Dual Boiler stand out.

You see, only a few semi-automatic espresso makers have preinfusion.

With the Breville Dual Boilers, you can set your desired infusion pressure based on both time (up to 60 seconds) and amount (percentage from 60-90). This way, you have endless options to experiment.

You can even use this feature to lower the brewing pressure and pull slow flow shots if that’s what you want. For instance, let’s say you want a 50 second shot at 5 bars? Easy, extend the preinfusion for that period and experiment with the amount of water. Then use the pressure gauge to figure out the exact amount.

Of course, you can also use the preinfusion in a more “normal” way and go for a 3-10 second phase before you kick it up to 9 bars.  This will combat channeling and other espresso mishaps.

The steaming on the Breville Dual Boiler is excellent. It’s precise and easy to control. You have more than enough power to create a good vortex in the milk pitcher. And it’s a satisfactory feeling to pull the steam lever on the right side of the machine.

The steam wand can swivel 360 degrees, which allows you to hold the pitcher in any position you want.

The steam output is adjustable up to 3 bars. This might be useful if you often find yourself steaming a particular amount of milk or crave more or less pressure. However, I never played around with this setting and have found the factory preset to be more than adequate.

Overall, steaming is a pleasure on this machine. I’m not a great latte artist, but if I wanted to get into milk drinks, this is the machine to do it on.

There’s a bunch of other cool features, which we haven’t even gone into yet.

Okay, now we have been talking about all the good things there are to say about this espresso machine. However, there must be some downsides too, right?

Breville has spent a lot of time and effort on the tech. This means that some corners have been cut in the materials and constructions. The Breville / Sage Dual Boiler weighs 12 kilos, which is still respectable enough.

But when you consider that typical Italian espresso machines come in between 20-30 kilos, it’s apparent that the device from Breville is more an appliance as opposed to a “prosumer” machine.

This point about prosumer quality ties into the next one, which is about the aesthetic factor. Some people will want an espresso machine with that semi-professional chrome-heavy look that most traditional dual boilers have.

The Dual Boiler has a specific aesthetic that feels slightly inferior compared to those Italian paragons of quality and style.

Even among Breville’s espresso makers, it looks a bit dated. It follows the same design philosophy as the Breville Barista Express and Infuser, introduced more than a decade ago.

In my eyes, the new design language used on the Bambino Plus and Barista Pro is more pleasing and more modern.

I think an upgraded Dual Boiler with a cleaner and more modern look would sell like hotcakes.

That being said, I do think that the black-colored Dual Boiler looks pretty swish.

This point also relates to the construction. Espresso machines are fragile things. When you have hot water, electricity, pipes, circuits, boilers, and so on, it’s no wonder that things can break. So you should have a plan B in case anything happens.

When it comes to most Breville products, repairs are discouraged. Unfortunately, the company seems to follow a philosophy of replacing rather than repairing.

This actually works out in favor of many owners who have problems with their machines. They simply get a brand new device for free. But what happens when the product is no longer under warranty? Will you have to undergo an expensive repair?

The policy will be different from country to country, so make sure to check that with your local vendor.

However, in contrast to other Breville espresso machines, it’s possible to make minor repairs to the Dual Boiler by yourself.

There’s a comprehensive thread about BDB-maintenance and repairs on the Home-Barista forum that you should check out if you have a Dual Boiler or are considering getting one.

So you want a super-advanced espresso machine that can brew and steam like a champ? What options do you have?

Well, of course, you still have all the Italian (or European) produced E61 type machines that will probably remain popular for a long time. However, they aren’t as advanced as the Dual Boiler.

The No products found. is slowly starting to catch up, but it also has its own set of compromises.

The obvious step up is the Decent Espresso Maker, which is by far the most advanced espresso machine available today. However, it’s also a lot more expensive than the Dual Boiler.

Also, while the Dual Boiler is still an espresso machine for all intents and purposes, it’s hard to get into the Decent ecosystem without buying into that geek/scientist ethos.

The Dual Boiler – among fans just called BDB – is a unique espresso machine.

Ten years after its launch, it still occupies a prominent position in the espresso machine landscape.

It’s the obvious choice if consistency and quality are what you’re looking for.

If you’re frustrated with your current single boiler or thermo-coil machine, you can upgrade to this device and say goodbye to all frustrations.

But that’s also the downside of the Breville Dual Boiler.

In most ways, it’s an end-game espresso machine, and it’s expensive enough that most people would consider it as such. But on the other hand, many coffee lovers would probably still have that nagging doubt and consider if the grass would be greener with an Italian brass and steel model.

The thing is that espresso makers are also about identity. While most people end up going with sensible, when it comes to getting a car, things are different in the coffee domain. Here you can afford to be a bit reckless. If you want a statement piece, it’s a lot easier to justify.

But for the confident coffee geek, who’s not ready to splurge on a Decent, you won’t get better espresso from a domestic machine in this price range and a good step above.