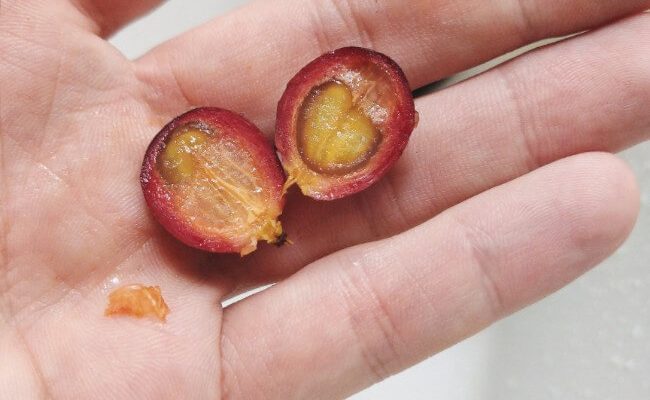 What is a Coffee Cherry? And how does it Taste?

Many people don’t know it, but coffee is a fruit. So why do we drink it instead of eating it? Find out here.

The common conception of coffee in the general population is that of a dark, bitter, and caffeinated drink derived from brownish beans. The darker, the better.

However, when you look at coffee from a purely biological point of view, this picture becomes a lot more nuanced. Coffee beans are not beans. Instead, they are seeds from the coffee cherry.

The coffee plant is a fruit tree. The fruits are similar in appearance to berries. They start green, and as they ripen, they turn redder.

After being picked, the skin and pulp are removed and what’s left is the seeds.

The seeds are eventually roasted, and they are then known as ‘coffee beans.’

Now, you might be thinking: “Hey, if the coffee cherry is a fruit, why have I been drinking this nasty black beverage all my life?”

If that’s your line of reasoning, don’t worry. There are some excellent reasons, which we’ll get to in a moment.

can you eat coffee cherries?

As modern consumers, we are used to fruits being sweet and delicious. After all, the fruit we find in the supermarket is like that.

But that’s not how nature works. Not all fruits are ideal for smoothies and fruit salads. However, we don’t realize this because 99,9 % of the fruits we encounter in our day to day life have been selected, hybridized, and refined to become perfect snacks.

It’s a bit of a side note, but the banana as we know it is only 7000-10.000 years old. The wild banana has so many seeds that our cave-dwelling ancestors probably just ignored them.

The reason that the coffee cherry has never become as popular as strawberries or regular cherries is similar: there’s just no point in eating them nutritionally.

When you bite into a coffee cherry, you’ll realize that it’s mostly skin and seeds (aka green beans). The skin is rough, and the pulp sticks to the seeds; a bit like a peach stone has some slimy parts that won’t come off.

The flavor of a ripe coffee cherry is rather lovely. I’m not going to say, that it’s better than a ripe mango for instance, but it’s a pleasant flavor. It’s sweet and fresh at the same time. Imagine a watermelon mixed with an apricot.

The main problem is that there isn’t any fruit flesh to speak off. But if you ask me if coffee cherries are edible, I’d say yes, there’s no problem eating them. Some animals do.

The old legend of how coffee was discovered is that the Ethiopian herder Kaldi noticed that his goats suddenly had a lot of energy after eating coffee cherries. You have probably also heard about the notorious kopi luwak, which is coffee cherries eaten and defecated by the Asian palm civet.

But now we’re getting sidetracked. Let’s get back on point.

When you depulp the coffee seeds, they are still extremely dense. If you try to grind green coffee beans, your grinder is going to have serious issues. However, when you roast coffee, the beans become brittle. Suddenly, they become easy to grind and brew.

Coffee roasting is a major contributing factor to the taste. However, the first coffee roasters in history probably just saw it as a necessity to brew a stimulating caffeine drink.

When you get a delicious cup of specialty coffee, the flavor has a lot to do with the agricultural conditions of the plant. However, in all honesty, the taste of the beverage and the coffee fruit will not have that much in common.

You can compare it to a steak and piece of raw beef. The flavors will be quite different.

However, if you’re curious about experiencing the flavor of the coffee cherry, and you’re not able to visit a coffee farm, you should try cascara.

Cascara is a byproduct made from coffee that has long been popular with coffee farmers in Latin America. After the cherries have been depulped, the coffee skin is dried carefully. The end product is known as cascara or sometimes as coffee cherry tea.

Cascara is more similar to tea than coffee. It’s sweet and refreshing, yet it still has a unique coffee cherry flavor. It also has caffeine at the same level as black tea. (Source)

If it’s from an outstanding and trustworthy producer, you can even eat it, a bit like raisins or dried cranberries.

Some people speculate that it’s healthy and full of antioxidants, while other people claim that mold and mycotoxins can quickly grow on it. The jury is still out on this debate. However, it’s worth noting that the European Union has banned the sale of cascara until further studies have been conducted.

My gut feeling is that cascara is relatively safe to consume, as long as you buy it from a reputable vendor. If you only drink it a couple of times to try it out, I don’t think the risk is significant.

But if you’re worried, then book a ticket and visit a coffee farm, and taste a fresh cherry.

If you’re a true coffee lover, visiting a farm is one of the most memorable points in your coffee journey.

Can you eat raw coffee cherries?

Yes, you can eat raw coffee cherries, since they are essentially a fruit. I wouldn’t advice eating too many, though.

Can you eat coffee grounds for caffeine?

Yes, you can eat coffee grounds and get the stimulating effect of caffeine. In fact, I have done this myself a few times when being desperate. Actually eating the coffee is more efficient than brewing it. However, coffee tastes a lot better in liquid form.

Can you chew on coffee beans?

Yes, you can chew on the beans, but be careful. If the coffee beans are light roast they can be quite dense, and if they are unroasted, they will be super hard, and you might hurt yourself.

On the other hand, darker beans are brittle and easy to chew.

Is coffee a vegetable or a fruit?

Coffee is sweet so we consider it to be a fruit. It’s called a coffee cherry because it looks a bit like a cherry when it’s ripe. However, when the two seeds inside the cherry are roasted, they are referred to as a beans, so that is why some people might think that coffee is a vegetable. The term ‘bean’ is actually rather misleading.