The branding is all about death and destruction. It looks like their head roaster follows the same nihilistic philosophy.

Do you feel like you aren’t getting the caffeine kick that you need from your cup of coffee in the morning?

Do you secretly envy zombies? (Their lack of taste buds, their work ethic)

Are you willing to sign your life away in order to get that caffeine kick that can get you through the day?

If you can answer yes to all three questions, then you might be the target audience of Death Wish Coffee.

Because apparently, from what they do over there, their coffee has twice the amount of caffeine compared to a normal cup.

As a barista who works in specialty coffee I am tasked to figure out whether Death Wish Coffee might actually also be worth trying for regular mortals with functioning taste (and pain) receptors in their skull. 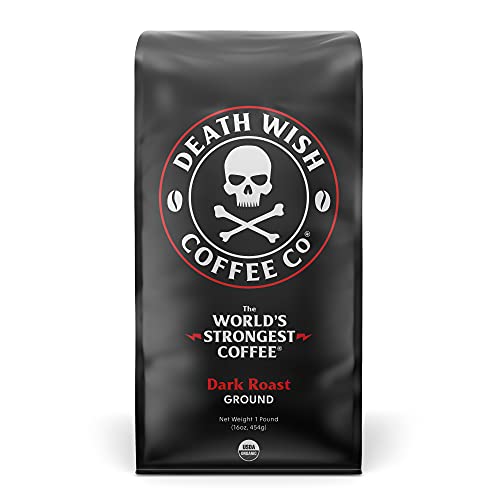 Death Wish Coffee: Dark Roast
It's as strong as they claim, but flavor-wise it's lacking
See more reviews

From Superbowl to Outer Space

Headquartered in Saratoga Springs, New York you’ll find Death Wish Coffee roasting and bagging the “world’s strongest coffee”.  Mike Brown created the brand in 2012 and worked diligently towards a roasting process and recipe for his coffee.  Their coffee is classified under the SCAA as a “specialty roast.” The beans are imported from India and Peru, and they are certified as being Organic and Fair Trade.

Death Wish Coffee has had commercial success, quite literally.

Finally, in 2021 the company was able to release their Medium Roast, which we’ll talk about later.

The packaging is very standard.  The coffee came in a box which included a nice sticker.  Mainly having a skull and crossbones and a variety of other images, their marketing tactics may seem a bit over the top.  However, the brand seems to be fully aware of this fact and instead embraces it.  On their website it says, “we create edgy, sarcastic content”, truthfully plenty of people love that and Death Wish Coffee has locked onto those individuals.  They have plenty of merchandise that spans from mugs, pins, stickers to a wide selection of clothing options.

Death Wish Coffee claims that it has twice the amount of caffeine compared to the average cup of Joe.  Caffeine-wise, what does that actually mean?  Let’s work within the framework of how Death Wish Coffee suggests that a person should brew their coffee.

I should preface that the amount of caffeine is an approximation because caffeine levels will vary between coffee beans based on a variety of reasons.  Death Wish Coffee suggests using 2.5 tablespoons of ground coffee per 6 ounces of water.  If we’re being geeky that equates to a brew ratio of somewhere around 1:11 – 1:14, depending on how you measure a “tablespoon”.

This is on the stronger site, but it seems reasonable enough for a pretty dark roast.

At this strength it’s safe to say that there is about 71 mg of caffeine in a normal cup of coffee.  So in a Death Wish cup that should amount to 142 mg of caffeine.

Since I am already talking about caffeine levels, I might as well bring espresso into the conversation.  It is often thought that an espresso based drink will have more caffeine than a cup of coffee. That is simply not true.

Yes, espresso does contain more mg of caffeine per ounce. Espresso, in specialty shops, is often served as a double shot and that would contain around 65 mg of caffeine.

However, the smallest cup of coffee size (around 12 ounces) would still be around 142 mg of caffeine.

In my experience, a shot of espresso using Death Wish Coffee could definitely compete with a cup of coffee from a coffee shop.

My caffeine intake is quite irregular. Some days when I open the coffee shop, I can have upwards of six to eight espresso shots because I’m sipping on espresso to dial it in for the day. Other days it’s a lot less.

I calculated that the most recent “caffeine-heavy” day I had at work was three espresso shots and an 8-ounce cup of coffee, which should equal around 290 mg of caffeine.

I only ever went past 6 ounces of Death Wish Coffee once. After that, I was overly jittery and didn’t feel the need for more caffeine that day.

So if you’re primarily into coffee due to the stimulant effect, I’d say that this brand will be able to deliver.

The first thing I noticed was the roast consistency of the beans.  On the medium roast the color of the beans were all over the place which was disappointing, however the dark roast beans were uniform.

For these coffees I made it a point to use the same brew methods and recipes to see how they would compare.  I brewed the coffee on french press and v60.  The french press recipe that I used was what they suggested on the bags.  As for the v60 recipe I decided to use my personal recipe that I typically use as a first brew for new coffees.

The V60 provided a cleaner cup however it was quite underwhelming.  The coffee just didn’t provide any complexity at all.  Complexity usually comes with notes changing as the coffee cools or the mouthfeel it provides and the aftertaste that occurs.

For this project I did have to consult the Specialty Coffee Association Flavor Wheel because I was unfamiliar with tasting notes under the “Spices” and “Roasted” section.  On that front it was interesting to get acquainted with that part of the Flavor Wheel.  The notes were consistent for the roasts between each type of brew method which is a really good sign.  What was truly affected was the body of the coffee and the mouthfeel.

The French Press seemed to be the better choice of the two.  Reason being: the oils that were able to be a part of the cup added the complexity that it needed to cause the coffee to be smooth.  The mouthfeel seemed to coat the tongue with the notes presented but didn’t linger long enough for it to be undesirable.

I only tried using the medium roast on espresso for a variety of reasons.  When working with coffee and pulling shots of espresso you want to be mindful of what it is being paired with.  Is the coffee going to be paired with milk, water, or stand alone by itself?

If a coffee is going to be paired with milk you often want a coffee that will have notes that are milk chocolate, caramel, and sweet fruits.  If you are having espresso with water or by itself you would want to have notes in the realm of dark chocolate and fruits that have their sugar caramelized.

Espresso paired with milk should mix seamlessly together.  The milk texture should compliment the body of the espresso.  Espresso that is stand alone should allow you to experience the complexity of the beans you are tasting.

Flat out, I would say even the medium roast was too much as a straight shot of espresso and as a drink with steamed milk.  The coffee didn’t exhibit any desirable characteristics that I work with in espresso.

Death Wish Coffee definitely deserves its place within the world of coffee.  As someone who is a part of the specialty coffee community I want to remain flexible as coffee changes. With that it can be challenging to draw the line between traditional and modern.

As coffee has become more popular and mainstream we have seen it go in so many directions.

With the rise of specialty shops and the Third Wave, coffee consumers have been able to “see behind the curtain” in regards to where their coffee comes from.  Oftentimes we are given the opportunity to know which country the coffee came from, the name of the farm and family, and even sometimes, how much the roaster bought the green coffee at.

In this case it was really hard for me to just be given an assurance of  being given “organic fair trade coffee from India and Peru.”

Death Wish Coffee belongs comfortably in the need-caffeine camp.  For home brewers, this might be a fun experiment to try and tackle but I would encourage a low expectation going into it.

All in all, if you want to try Death Wish, I would say to keep it as simple as possible.  Try it on a french press or a small batch of auto-drip.

Hopefully, your taste buds will survive!