Review of Gabi Dripmaster A & B: The Future of Pour Over?

The Gabi Dripmaster range of products from the Korean company Glowbeans aims to revolutionize pour over coffee. In this review, I’ll tell you whether they succeed.

Ever since pour over coffee had its renaissance around a decade ago, the image of the barista with his gooseneck kettle has been iconic.

The kettle with the narrow spout was a necessity. It gave us coffee people a sense of precision.

And back then it looked pretty damn hip…

However, in recent years, some highly respected coffee geeks have started to question whether it’s the most accurate and repeatable way to brew coffee. This has given birth to some new, interesting products.

In a commercial setting we have seen highly advanced automated pour over brewers trying to emulate a barista: ‘Marco SP9‘ and the ‘Poursteady‘ come to mind.

The new school of thinking among coffee geeks is that unwanted agitation generates less flavor clarity and an undesirable mouthfeel. Not unlike a bad grinder would.

In the homebrewing community the Melodrip device has garnered much attention for bringing repeatibility and controlled agitation to the masses.

The Gabi Dripmaster A and B from the relatively new Korean company, Glowbeans, set out to face a similar challenge.

I’ll review both models in this article, but counterintuitively I’ll begin with the B-version since there’s a dearth of info about it online.

It’s also the product I’m personally most excited about. 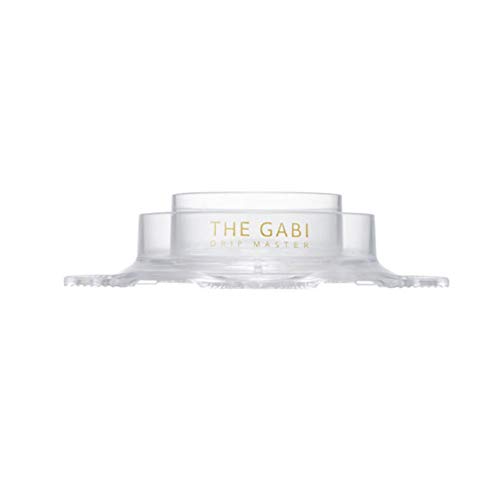 29 Reviews
Gabi Dripmaster B
This product will increase the flavor clarity and aftertaste when used with a pour over dripper such as the Hario V60 amd Kalita Wave. It will also give you more consistency from brew to brew
See more reviews

What is agitation, and why do we want to reduce it?

But before we start the review, we need to talk a bit about agitation. This concept is essential to understand before we talk about the individual features of the two Dripmasters

Now, please be patient for a moment; we’re about to get geeky.

When you brew pour over, whether you’re conscious about it or not, you’ll create some agitation in the brew bed every time you pour.

The more distance you have between your kettle and the dripper, and the wider the spout of the kettle is, the more agitation will occur. In an extreme scenario, a single pour could agitate the brew bed as much as stirring with a spoon would.

The problem with agitation is that it tends to cause something hardcore coffee geeks have dubbed ‘fines migration.’

No matter how good a grinder you have, there will be some fines. The rule of thumb, however, is that it’s better to have a small amount because they over-extract easily and add bitterness to the final cup.

The new school of thinking among coffee geeks is that unwanted agitation generates less flavor clarity and an undesirable mouthfeel. Not unlike a bad grinder would.

So for a relatively small amount of money (compared to a high-end grinder), you should be able to get some remarkable results with Gabi Dripmaster B; that is if it delivers on the promises. 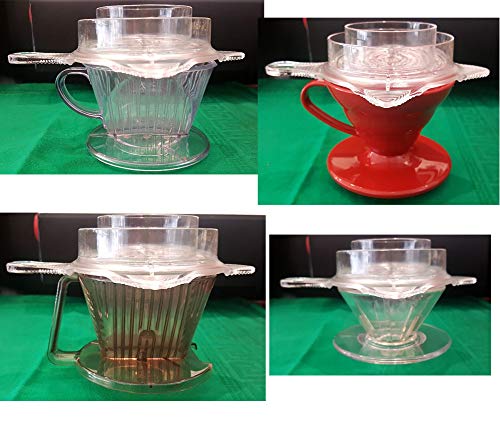 The Gabi Dripmaster B looks intriguing; a bit like the lovechild of a Tupperware contraption and a showerhead. It’s made of Tritan plastic which is heat and shatter-resistant, and of course BPA free.

The main idea of the Dripmaster B is that you can use it along with any (or at least most) pour over devices. It will fit a Hario V60, Kalita Wave and most other dripper cones except the biggest Melittas and Chemex brewers.

There are two concentric water reservoirs in the device. The inner one will hold around 65 ml of water and slowly disperse it on top of your brew bed in a minute or so. The outer reservoir will hold about 45 ml and let them drip through in 30 seconds.

If you keep pouring in the center ring, eventually the water will spill over and flow into the outer circle. You can use one of the reservoirs individually or both at the same time. It’s up to you.

How I use the Gabi Dripmaster B

As mentioned in the introduction, the two different Dripmasters have two goals.

I have seen some people complain about the Dripmaster B online, but I have a feeling that they have the wrong expectations.

It seems these people view the Dripmaster B as a sort of shortcut; like a lazy baristas brewers substitute for careful pouring. That’s not its real purpose.

In theory, you could probably get away with just filling the reservoirs up continuously until it matches your targeted brew ratio, but I don’t think you’d get stellar results.

Personally, what I find working best is to use the Gabi Dripmaster B at specific stages in my brewing. Depending on the cone dripper I pair it with, I might change the recipe. Usually, however, I will pour only 50%-60% of the total amount of water using the device.

How I use the Gabi Drip Master B

Here’s a way I have been using it with Kalita Wave and Lili Coffee Dripper.

This recipe is relatively easy to replicate, and it creates very consistent results with amazing flavor clarity. However, it still requires a barista’s attention. You can tweak the recipe yourself, but in general, I would opt for some controlled agitation at one point in the method.

You will find that using the Gabi B seems to enhance aftertaste and flavor clarity. The reason for this is probably that the fines are allowed to settle in the brew bed early on, and that the last 50 percent of the water is added in the form of tiny drops that don’t cause any disturbances.

It might sound pseudoscientific and superstitious, but I have integrated the Dripmaster B into my brewing arsenal, and use it daily.

I would recommend it to every coffee geek who is looking to take their pour overs to the next level.

An additional use for the Gabi Dripmaster B is travel. On the road, it’s not the most convenient thing to bring a pour over kettle, so this device makes a lot of sense.

For increased portability, I use it along with the collapsible Munieq Tetra Drip (big version), which is the perfect size for the Gabi. My recipe is a bit different than usually, and I tend to use both reservoirs when brewing on this kind of dripper.

I’m not going to say that this is more practical than an Aeropress or Clever Dripper for travel, but if you don’t mind the extra effort to get some damn good coffee then, I’d suggest that you give it a go.

The Dripmaster A is the more famous of the two devices, so that’s why I have saved it for the last section.

From an engineering and design standpoint, a lot of cool things are going on here. The dripper consists of a water tank, a dispersion screen, and a flat-bottom dripper, similar to a Kalita 155.

All the things fit neatly together, so it doesn’t take up much space. It’s easy to put back together and feels sturdy once assembled.

The idea behind the ‘A’ version is a lot more plug and play. Insert a filter, drop in your ground coffee, and then pour water in the tank. By using the laws of physics in some genius way, the first water will drop faster than the subsequent ones. This creates a kind of blooming effect. 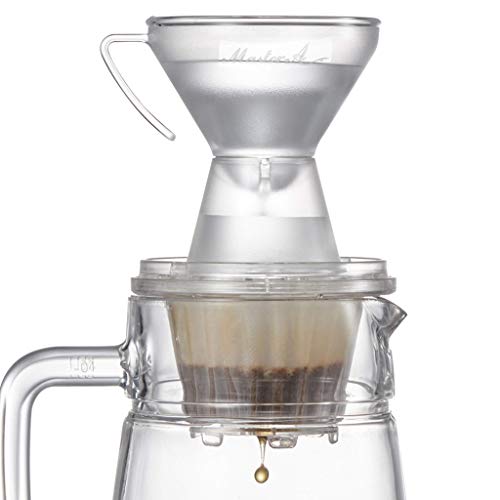 The Dripmaster A is a great idea, and the execution is also stellar. However, I don’t love it quite as much as the “B” version. The reason is that it feels a lot more limiting. Sure, I can brew tasty coffee with it, but it feels a bit more cumbersome than I’d like to.

The best brews with the “A” have all included some stirring of either the whole device or lifting off the reservoir, to get a teaspoon into the brew bed for some manual stirring. Both these scenarios feel a bit awkward.

This also confirms the theory I mentioned above; you should aim to control and reduce agitation, but for the best results, you should have a modicum of manual stirring.

Besides that, the only thing I can do to tweak the brew is adjusting the grind size or creating some manual agitation.

Another drawback regarding Dripmaster A is the size. The brew bed is similar to a Kalita 155, which means that it’s best for a dose of 14-18 grams of coffee. Any more than that and you’re pushing the limits. The capacity of the water tank is also quite low at 150 ml. Of course, you can add more water as it drains, or bypass the tank and go for a bloom directly on the brew bed.

One thing to be aware of is that you’ll see some rather long brew times if you try to brew more than the intended single cup.

The paper filters that came with the device was also negative. They aren’t bleached, and no matter how much you rinse them, they will impart a cardboard flavor to the brew.

Don’t get me wrong it is possible to get some delicious brews from the Dripmaster A, but so it is with many other methods once you have mastered the basics (good beans, soft water, decent grinder).

I find that the cons outweigh the pros. I like something a bit more flexible.

That being said, I still think it’s a neat product, and I can see it being used either in a busy cafe setting or with a lazy homebrewer who liks a “set and forget” solution.

I should mention that to a certain extent, it is possible to use both the water tank and dispersion screen with other drippers. I have used it with a Kono 1-cup dripper and gotten good results. But if this is the primary use case for you, I’d probably get the “B” version.

This is an exciting range of products, and they both bring something new to the table. I admire the idea and vision of “A,” but I can’t say I love it. I’m sure there’s an audience for it, however.

Gabi Dripmaster B, on the other hand, is one of my new favorite products. If you don’t already own a Melodrip device, which seems to be quite similar, and you’re addicted to manual brewing, then I’d go ahead and get one of these right away.