How professional is the Gaggia Classic Pro? In this review, we take a close look at the updated espresso veteran.

The Gaggia Classic is known for being one of the cheapest espresso machines that will produce so-called god shots.

It’s also famous for being a reliable and easy to repair workhorse that can last for decades with just a tiny touch of tender loving care.

For that reason, many people got upset, when the Classic was redesigned and production was moved from Italy to Romania five years ago.

It turns out that most of the “upgrades” were downgrades. It appeared as if Gaggia’s new owners, Philips, were just out to make a quick buck.

Now, the iconic model is back again, and it had a facelift. This time it goes under the name “Gaggia Classic Pro.”

In many ways, this model succeeds the original version. However, there are still some things you should be aware of before buying. In this review, I’ll explain who this machine is for, and more importantly, who it is not for. 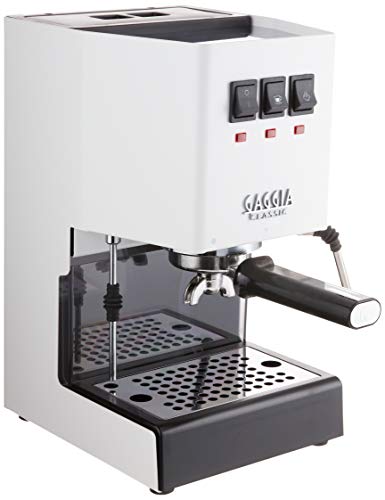 1,248 Reviews
Gaggia Classic Pro
This espresso machine is the coffee world's version of Converse All Stars. It's a timeless classic and always relevant .
See more reviews

The most obvious thing about the new Gaggia Classic Pro is, of course, the range of new colors. My version is a lovely matte white, which looks a lot more stylish than the original chrome version.

Let’s be real here. Looks are a vital factor when choosing an espresso machine. I think the Gaggia Classic Pro strikes a nice balance between looking minimalist and modern while still retaining some Italian art deco vibes.

The logo has also been moved and redesigned compared to the original version.

The buttons are also bigger and more sturdy on the new Pro.

The Classic now also has the “Pro” moniker because the steam wand has been updated to a more legit type.

The previous model came with a Panarello steam wand, which is not suitable for frothing microfoam milk for latte art.

Many people had to install a Rancilio Silvia steam wand on their unit due to this issue.

The new steam wand is much better. You can make froth pretty good milk with this device. However, many machines out there have more steam pressure and bigger boilers. If you’re only frothing milk for two cappuccini or a big latte, it will be fine. 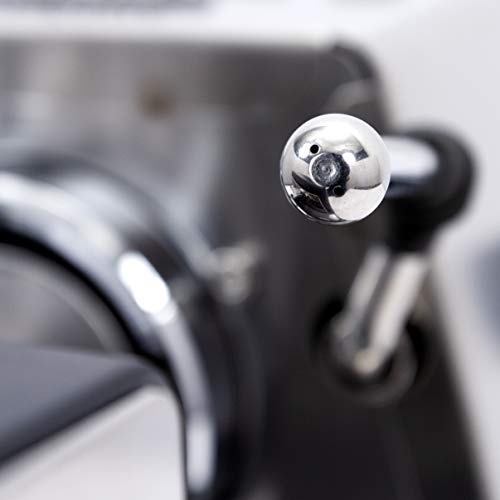 The solenoid valve is also back on the Gaggia Classic Pro. This feature is something you don’t see on the cheaper espresso machines. Without going into too many technical details, it helps with cleaning and daily use. This valve helps to flush out excess water from the puck, so it’s dry and a lot easier to knock out of the portafilter.

It also allows you to backflush the machine. It sounds fancy, but basically, it just means that the machine’s hot water can be used for cleaning the brew head.

So the updates compared to the 2015 machine are all pretty great. The solenoid valve, new colors, and better steam wands are all nice to have.

There’s also a smaller aluminum boiler than the previous one, which was made of stainless steel. I’m not qualified to say which one is better long term, but in daily use, the new boiler configuration is heating super fast, which is very convenient.

You can find a ton of information when it comes to hacks, upgrades, repairs, accessories, and so on.

The Gaggia Classic is also famous for being one of the cheaper models available, which sports a commercial-sized 58 mm portafilter.

Pro tip: I think the greatness of 58 mm is slightly overrated. It’s still relatively easy to find espresso accessories such as baskets and levelers in less standard sizes, such as 51 or 53 millimeters.

Also, it’s worth pointing out that many naked 58 mm portafilters (such as the ones made for E61 machines will not fit the Gaggia Classic.

However, 58 mm means that you can have a thinner puck of coffee, which theoretically means a better extraction.

Getting a Gaggia Classic also means that you buy into an ecosystem where countless people have paved the way before you. You can find a ton of information when it comes to hacks, upgrades, repairs, accessories, and so on. There’s even a whole subreddit dedicated to the Gaggia Classic.

All this is great if you want a new hobby. But that begs the question: Is the device still worth it if you don’t want a hobby?

But that begs the question: Is the device still worth it if you don’t want a hobby?

The Gaggia Classic Pro is capable of pulling some truly fantastic shots. After I had dialed in the grinder (I used the Eureka Mignon Specialita), the shots tasted great.

The machine is set to 15 bars out of the box, which is too much, but if you’re pulling more traditional darker roasts for milk-drinks, I don’t think you’ll notice it.

It’s challenging to get a perfectly even extraction with such a high pressure, so most people will end up getting the spring mod kit.

I also used a precision basket (IMS Competition) and a naked portafilter, and along with the lower pressure, I have had some fabulous pulls.

The main issue when brewing espresso is that the temperature is so unpredictable. The machine tends to overheat and push steam out of the brew head, so it’s necessary to purge a lot of water to get down to an acceptable temperature.

Either you need to get a careful temperature surfing routine down to a science, or you’ll have to live with the occassional bad shot.

On the flip side, it heats up remarkably fast, which is excellent in the morning when you’re busy. I know some people will disagree, but I would pull shots after 2-3 minutes sometimes.

I’m not a big milk drinker, but the steaming capabilities were also adequate in my tests. It goes from espresso to steaming in around 30 seconds, which is fine when you’re just making for one or two people.

The steam power is nothing exceptional, but you should be able to get some decent microfoam with practice.

The Gaggia Classic was introduced in 1991. That’s a long, long time ago. And it hasn’t substantially changed in the meantime.

If you look at it from one side, it means that it must be good for something to remain the same for thirty years.

On the other hand, one can also wonder about the absence of new technologies such as PID and preinfusion.

Out of the box, you can get pretty good espresso from the Gaggia Classic.

If you’re a little bit laissez-faire and don’t want to obsess over small details, the coffee will likely be good enough for you.

However, if you want to treat espresso as a science and measure all the small details, then the Gaggia Classic is a bit limited out of the box:

The Gaggia Classic Pro has both gotten a facelift and some major internal surgery. IMO, all of these things are great. At the same time, it’s still the old and trusty espresso maker that has won so many fans over the years.

With proper care it should last you a decade or two. If you can’t repair it yourself, one of the local espresso technicians certainly can.

While all this is great, it’s starting to become evident that other manufacturers are way more progressive tech-wise. Nowadays, you can get Breville machines with PID around the same price point as the Gaggia.

In the same way, specialty coffee has pushed manual brewing forward; espresso has also changed. Stuff like preinfusion, temperature profiling, single dosing, naked portafilters, and so on are becoming mainstream. To be a “Pro” rather than just a “Classic,” you have to support those things.

With enough time and patience, you can make modern espresso with the Gaggia Classic Pro, but the key here is to take that time and effort. It’s not just plug and play.

But if you have the patience and want a new hobby, this is still an excellent machine for people who like products with a history.