Tamp like a Champ: The Best Espresso Tampers for the Coffee Geek

You shouldn’t overlook the basics when it comes to espresso. The tampers that come with budget machines are often flimsy and less than ideal.

Many newbies think that a coffee tamper is incidental; a nice-to-have rather than a must-have.

And while it’s true that you should probably pay closer attention to your grinder, roast date of your beans and water hardness, a tamper is no joking matter when the aim is to brew the best possible espresso.

With coffee and especially espresso, the devil really is in the details. This means that it’s uber-important to get the basics right.

Read on, if you want to know what to look for in a great tamper nowadays. 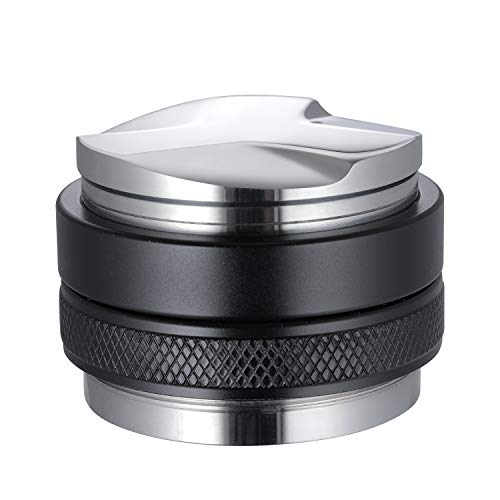 This is a modern tamper. It combines a leveler and a push tamp in the same unit. It's a different way of doing things, but many home baristas as well as professionals have become fans of the new approach to tamping in recent years.

This tool combines to new tamping ideas into a single unit that will make your espresso workflow a lot more consistent.

First, you have the adjustable leveler/distribution tool will help you create the even surface. Next, you have the push tamper, where you just press quickly down with your palm to make sure that the grounds are fully compressed.

This two motions are a lot easier to get right than traditional tamping, so for that reason it has become a very popular during the last couple of years.

This version is 53 mm, which means it fits the typical Breville espresso makers. There’s also a bigger 58 mm version for professional machines. 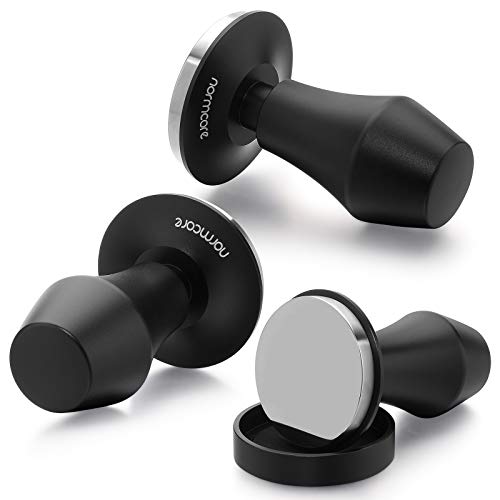 This tamper has got a lot of things going for it. Actually, it has 3 cool features rolled into one.

It’s a precision tamper, meaning it’s a few milimeters bigger, than a regular 58 mm tamper. This way it will compress the puck all the way to the edges, which in theory should minimise side-channeling.

It also has an auto-level disc and comes with 3 different calibrated springs, so you can get an even tamp with the correct amount of pressure every time.

I have this tamper at home. It’s very well-crafted and a steal for the money.

It also comes with a cool carry-case and a two additional springs with a different calibrated pressure.

Normcore has several sizes, so make sure to get the right one for your portafilter! 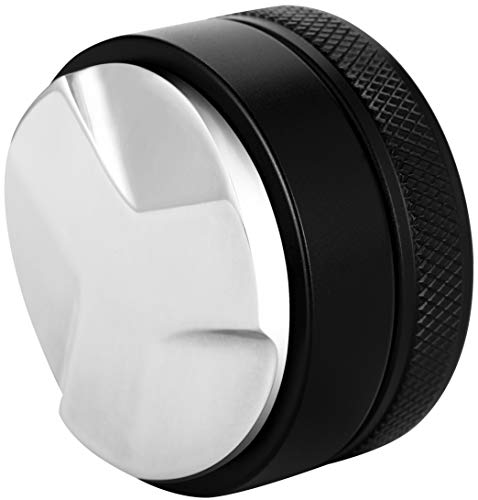 And now for something completely different!

Most tampers follow a similar form, whether they’re calibrated or not. You have the base and the handle attached via a stem. In the past, most variations tended to be from the material front, rather than changing the approach altogether.

This has changed in recent years, where so-called levelers have become all the rage among the barista elite.

Instead of pressing the coffee grounds down, this espresso tool spins around on top of the portafilter and gradually massages all the grounds into place.

Some baristas use this tool before tamping, while others swear that tamping is not needed when using a perfectly calibrated leveler.

You can versions that are way more expensive than this one from Apexstone, but they basically do the same, so why overpay? This version is available in both 58 mm and 53 mm versions. 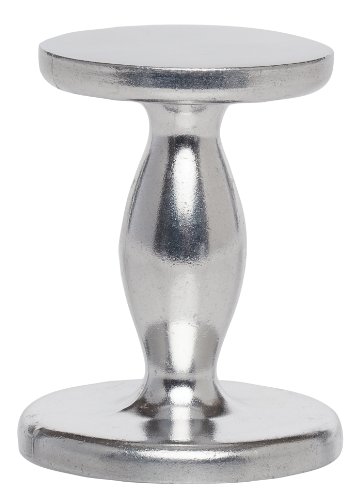 If you’re not sure which size tamper will do, you might want to investigate this model. It’s dual-sided. One flat end measures 50 millimeters, and the other is slightly larger at 55 millimeters. It’s made from heavy-duty aluminum, which does mean it costs less than some models, but that doesn’t impact its utility or safety. Aluminum is resistant to the corrosive acids present in coffee, which can cause metal-coated or cheaply made tampers to flake over time.

It’s easy to clean and maintain for everyday use. There may be no frills, but there’s also no fuss. 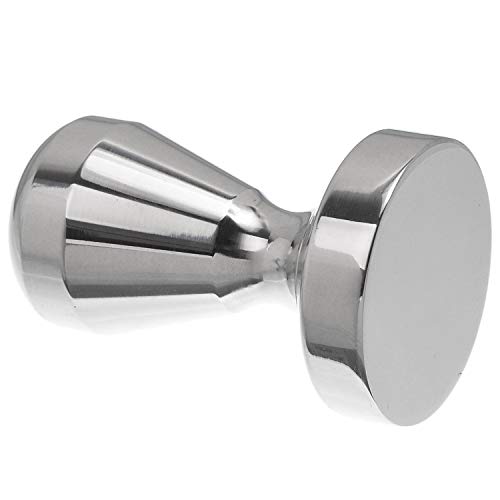 With a steel-clad iron body, this tamper is also a no-nonsense model. While it isn’t calibrated, the substantial weight and flat base provide a perfectly even surface for every shot. Those who purchased this model seem incredibly pleased by both of these particular aspects.

As stated the tamping disc measures 51 millimeters and the press weighs in at an impressive 20.1 ounces (570 grams). Maintenance is also as uncomplicated as this highly affordable press – simply wiping it down with a damp cloth after each use will keep it bright and shiny for years to come. 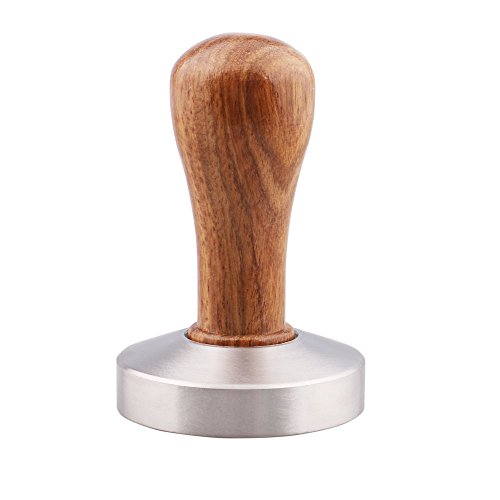 Let it never be said that the tools of consistency and excellence must also be unadorned or boring. This tamper from Omigogo offers a bit from both schools of sensibility.

The tamper head measures 51 millimeters and is crafted from stainless steel. It provides the world a pleasant, no-frills face for consistent shots every time. In the same stroke, the handle is crafted of warm rosewood, rounded and smoothed for a comfortable fit in any hand. 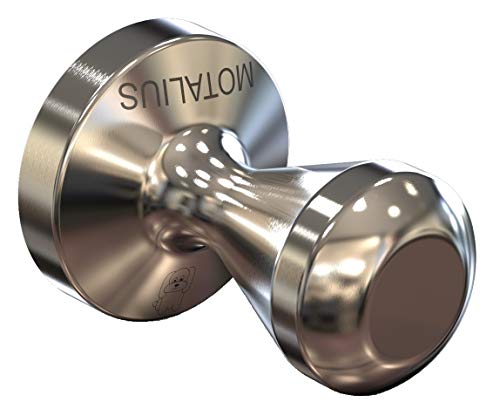 Beautiful enough to serve as a paperweight, but its design is all business, according to many of the rave reviews this press receives. Turned out of a solid piece of stainless steel, it may be slightly more costly. However, it’s also rust-resistant and easily maintained, with a pleasing weight. The tamping base is also a bit larger, so it’s essential to measure the diameter of your portafilter before trying it out.

The purpose of tamping

The goal of tamping is simple: It’s all about avoiding small pockets of air in the basket.

When your espresso machine delivers its piping hot deluge into a portafilter of improperly tamped grounds, you’re asking for trouble. And a less than delicious shot.

An uneven and sloppily tamped filter will have less dense regions. What many non-professional baristas don’t realize is that this creates a phenomenon known as channeling.

As the water is released into the filter, it will find the path of least resistance, because that’s what water does.

A properly tamped puck, which is what we call the compressed coffee in the portafilter, will present an undifferentiated front to the water, and your shot will have better chances of reaching espresso perfection.

An improperly prepared puck, on the other hand, offers a lot of options for that water to pass around the coffee easily, and your shot will not be properly extracted.

Some people get too carried away when it comes to tamping. The truth is that it’s a necessary step, however, you don’t get any ‘bonus’ points for tamping extra hard. You just need enough pressure to push out the air of the basket. Once that’s achieved, your job is over.

It’s far better being consistent and tamping the same way every time, instead of seeing it as some kind of biceps powerlifting exercise.

Don’t worry if a few clumps of coffee are stuck on the inside of the basket. If you try to knock them loose and tamp again you’ll risk creating air pockets at the edge of the puck.

It actually happens fairly often that people get injuries from having bad technique or pushing too hard. Here’s how you do it properly:

An important attribute to look for is that your tamper fits your portafilter—too small and you won’t get a good, even tamp. Too large and the tamper won’t accomplish anything at all much.

Attributes of a Great Coffee Tamper

The tampers that come with many espresso machines are at best questionable. If you’re only going to be using a pressurized basket, then that might not be a problem. But if you want to make legit espresso, then you need a better tamper for more precision and repeatability. Here are some factors to keep in mind: