The Cafflano Kompresso is a small coffee maker with a big impact. It makes quality espresso shots available to a whole new subset of coffee lovers.

Back in the days, espresso was an elitist hobby, requiring a high-priced machine with an Italian sounding name and a similar grinder.

That has all changed in the last couple of years with the introduction of manual espresso makers such as the ROK and the Flair Espresso Maker.

The Cafflano Kompresso is probably the smallest and most economical of the bunch.

This diminutive coffee maker could be mistaken for a low-cost Aeropress knock-off but in fact, it is a capable manual espresso maker. We have been trying it for some time, so read on to check out the details.

Cafflano is one of the new and interesting names on the international coffee scene.

The company launched their first product, the Cafflano Klassic in 2013 after a successful Kickstarter campaign The Klassic is a small and portable all-in-one coffee maker with both grinder, dripper and gooseneck kettle built in.

The company was started by Hansang Yoon, a South Korean coffee lover, who didn’t like the idea of buying high-cost takeaway coffee all the time. So he scratched his own itch and developed the brewer.

The second product launched by Cafflano was the ‘Kompact’, which is also an ultra-compact black coffee brewer.

The newest product in the line-up is the Kompresso; the company’s first stab at the espresso scene.

A word on manual espresso

A couple of years before, espresso was something for people with big wallets and serious patience. Espresso was and is a hobby that requires time and money. Everybody can afford a Hario V60 but only people who mean serious business are gonna take the step and invest in a device from Rocket or La Marzocco.

In recent years, we have seen a few incredible, modest choices for espresso lovers on a tight spending plan. The Rok and the Flair espresso makers come to mind. These machines represent great value at less than $200.

The Cafflano Kompresso is even cheaper. And as an added bonus it’s as portable as an Aeropress.

Can you expect espresso miracles from these new and cheap devices? Will it be able to deliver a god-shot?

Well, you will certainly be able to produce extremely delicious espresso. And by that, I mean shots that are far superior to what you are served in mediocre coffee shops.

The manual espresso makers are all capable of delivering enough bars to pull true espresso shots.

However, if you really want to achieve espresso perfection there is a learning curve. It’s also worth remembering that each shot takes some effort to produce – especially if you combine the manual espresso maker with a manual grinder.

The Cafflano Kompresso is a lightweight device, mostly consisting of BPA-free plastic. The naked portafilter and shower screen are made out of etched metal, though.

In numerous ways, you could compare the development with the Aeropress. There are a chamber and a piston that work together and use hydraulic pressure to force the water through the coffee puck.

The device doesn’t feel heavy duty and at first, I was a bit afraid to exert full pressure using it. It turns out that it can easily handle both normal use and more extreme scenarios where almost all my body weight is placed on the device. This has been the case a few times where I have used too fine a grind.

The only thing I can be a little bit worried about is the rubber ring sitting on the shower screen. A little bit of misalignment and I fear that an accident could happen. Hopefully, (like with the Aeropress) it’s easy and cheap to get a replacement.

(Update May 2019: After one and a half year the Kompresso is still going strong. The build quality is solid)

If you’re familiar with dosing, tamping and brewing espresso it should be pretty easy to start using the Cafflano Kompresso.

Obviously, there is no real portafilter here. Instead, there is a small basket filter, that can take around 12-15 grams of coffee. I have found that the funnel that comes with the Aeropress works great for adding grounds. 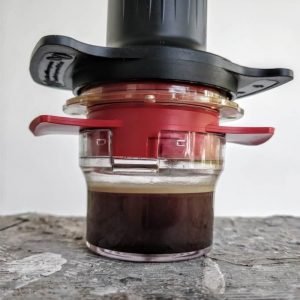 The scoop that comes with the device also doubles as a tamper and it would work a little better had the company’s logo not been protruding ever so slightly. Still, it’s usable.

Once you have dialed in your grind it’s pretty easy to insert the piston and press it to the bottom. It’s possible to exert a lot of force and I’d say that the famous 9 bars are within reach.

If you go too fine, however, you’ll really have to struggle getting any water to pass through the coffee. The opposite is also true. A precise grind is really essential with this contraption.

A quick sidenote: I was able to get pretty good results even with cheap grinders such as the Hario Skerton Pro. Grinding a single shot does take a long time but it’s worth it.

As mentioned earlier the espresso tastes rich and smooth. Just like a good espresso should taste. I have seen other bloggers comment that it’s impossible to get crema out of the device but that’s simply not the case.

If you dial in the grind, and use freshly roasted beans, you can achieve it. How much? Well, it’s certainly not gonna be at the same level as some commercial machines but if you use a pretty fresh medium-dark roast, you should be able to get half an inch.

It’s very easy to clean the Kompresso and control all variables meaning that you won’t encounter any stale shots if you live up to your duties as a home barista.

As if all this wasn’t already pretty cool. The Kompresso has one more ace in its sleeve: It’s capable of making cold-brewed espresso.

I first saw this on Cafflano’s own Instagram account and was mildly skeptic. I still tried it, and honestly, I was  blown away.

The recipe is almost like a normal espresso shot. Except you tamp extra hard and allow a 1-minute pre-infusion. Well, and of course you use cold water instead of the usual 200 F.

But cold-brewed espresso on the other hand… this is a game changer.

Supremely smooth and complex at the same time. Almost no bitterness, but plenty of acidity. This is especially true with quite light roasts that normally wouldn’t be suitable for espresso.

This brewer has many things going for it but speed is not one of them. Especially not when paired with a hand grinder. It can easily take 5-8 minutes to make a single shot, which is pretty damn slow.

Also, it does take some time to dial in your grinder. Making shots that clogs the filter or just pass right through is a frustrating experience.

Aside from that, it’s hard to come up with any real negative arguments against this tiny espresso maker. 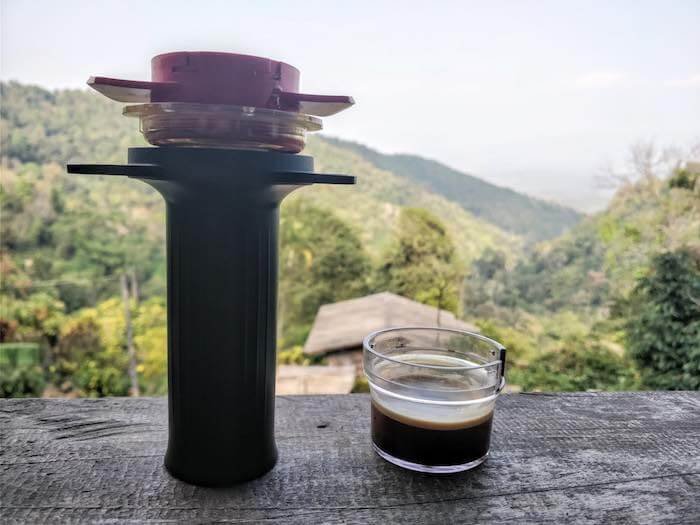 The Cafflano Kompresso is the cheapest espresso maker that I know of (that isn’t completely worthless). The design is intelligent and simple and it is built to last.

Being so small and lightweight it’s also by far the most portable espresso brewer around.

I could see the typical pour over people dip their toes in espresso with this one.

Espresso lovers looking for a device to bring along on a trip or picnic could be an ideal audience as well.

If you’re curious about manual espresso, I suggest you give this a go. This tool provides many of hours of fun as well as tasty shots. 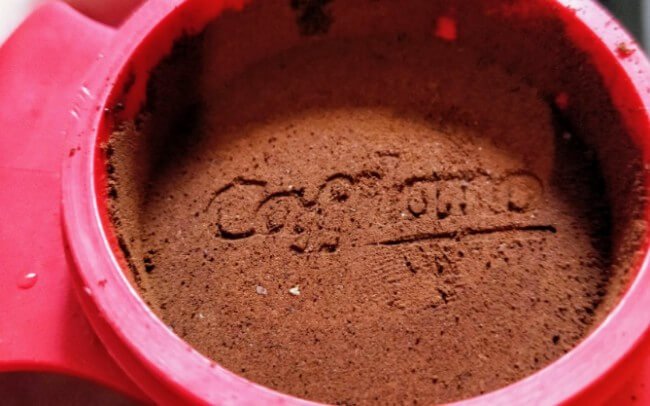