Best Coffee Grinder for the Aeropress

To get the maximum out of the Aeropress, you must grind fresh. Pre-ground coffee will never allow you to experience the full potential of specialty coffee.

The Aeropress has been a standard bearer for coffee lovers for years but in fact, it is more complex than its simple and elegant design would lead you to believe.

Just because this device was invented by a toy designer, it does not mean that you can break the rules you follow for other brewing methods. This includes using freshly ground beans every time. For that reason, you should consider getting a grinder so you can enjoy the beans’ full potential.

The Baratza Encore and the Aeropress is a time-tested and popular combo among coffee snobs. This grinder can produce a consistent grind while still being budget-friendly. Baratza is also known for their extremely generous customer service.
LEARN MORE

The first rule of thumb in buying good coffee, regardless of whether or not you are using an Aeropress, is that whole bean coffee is superior to the pre-ground stuff you can find in the supermarket, usually in colorful cans. This is because whole beans retain their freshness a lot better than when it is ground.

Coffee begins to go stale almost as soon as it is ground. The oils and other compounds in coffee beans that give it its flavor evaporate and degrade many times more quickly due to the increased surface area exposed to air.

You may think that buying pre-ground coffee that has been vacuumed sealed will preserve a lot of this flavor, but even airtight packaging cannot prevent the beans from losing their flavor.

Buying whole bean coffee and grinding it only minutes – or even seconds – before brewing is the only way to ensure that you get the boldest flavor and do not lose any subtleties of your bean, regardless of the grind you ultimately use.

A blade grinder sucks. Get a burr grinder. 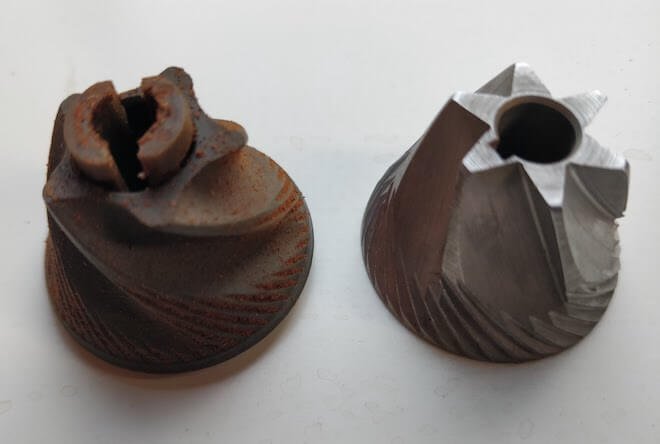 Once you have decided to quit buying pre-ground coffee, the next step is choosing the right grinder. Most new coffee drinkers may opt for a cheap blade grinder available in the home appliance aisle in any big box store. Do not commit that atrocious mistake!

Blade grinders grind coffee much less consistently than burr grinders, which will offer brewers inconsistent extraction. Undesirable bitter and acidic flavors will become over extracted from smaller particles of coffee while desirable, subtle notes will be lost from larger particles.

On top of this, a blade grinder’s metal blades can generate a high amount of heat, which can alter the flavor of the beans themselves, especially if they are a light roast.

Burr grinders work as a nested set of conical “burrs” that rub against each other to evenly crush coffee beans. These grinders tend to be a bit more expensive than blade grinders but will give you much more consistent grounds that extract evenly to give you the same cup of coffee each and every morning.

You don’t need the most expensive model 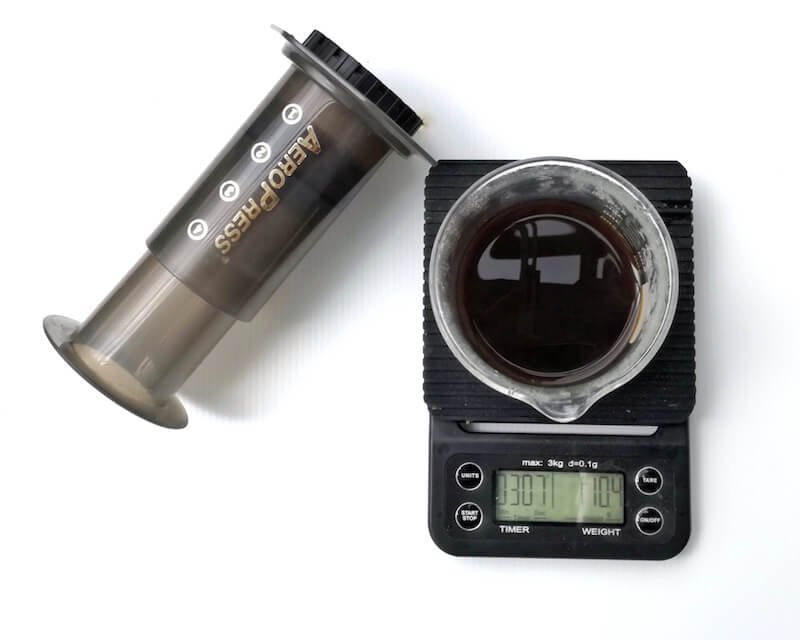 Although the switch from pre-ground coffee to freshly ground coffee beans will significantly improve your cup, the Aeropress is luckily relatively forgiving when it comes to grinder quality. With something like pour over or French press it’s more important but not in this case.

The Aeropress requires a medium to fine grind depending on the exact recipe, but it does not have to be perfectly consistent for a decent cup. Because of its excellent filter, the Aeropress is able to sift out most of the fine particles of coffee that may end up in the mug with another brewing method.

If money is no issue, you certainly could go with a high-end grinder, but for budget-minded folks, a regular burr grinder will most likely suffice.

The Best Coffee Grinder for the Aeropress

1: For the traveler: Porlex Mini 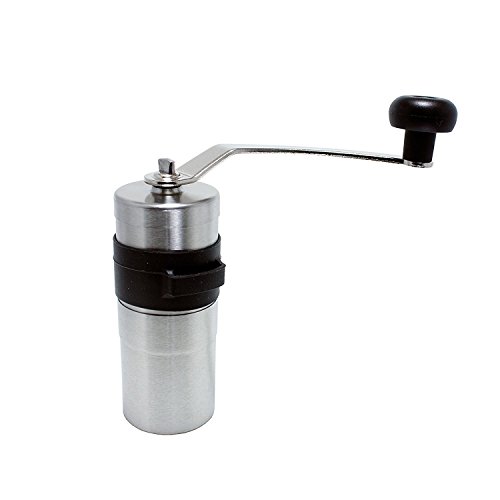 The Porlex Mini is one of the go-to manual burr grinders. Its elegant design and stainless steel body make it match for the Aeropress is both design and function. It has been updated several times in the last several years and seems to have a much more structurally sound build.

Standing at only 130mm tall and 47mm in diameter, this tiny powerhouse can travel anywhere. It pairs especially well with the Aeropress, since it actually fits snugly inside the Aeropress, making packing for a trip a breeze.

The cons of the Porlex Mini mostly have to do with the fact that, in the end, it is still a manual grinder. This requires time and energy, which will depend on the number of beans you are grinding at once. This is definitely not an issue for one or two brews, but might start to get on your nerves if you have to do it every day as soon as you wake up! 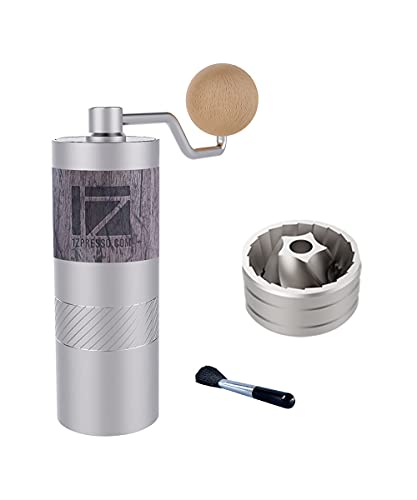 We have previously reviewed the first edition of the mini grinder from 1Zpresso — and back then we were incredibly impressed.

This is the new and updated version. It still has the sharp steel burrs, and the ultra smooth bearings. The handle and the design are just slightly improved.

Like the Porlex Mini, this one also fits inside the Aeropress, allowing economical use of your luggage real estate.

It’s more expensive than the Porlex but for the money you do get a lot. This grinder is more consistent, giving you a tastier cup. At the same time it requires less effort to grind, since it has bearings.

The advantages of using a small, manual burr grinder are plenty. Even though it is hand-cranked, the 1Zpresso Q2 is still a burr grinder, so the grounds it produces will be more consistent than those of a blade grinder. Despite its small size, it is capable of grinding up to 20g of coffee beans in one go, which is more than enough for coffee for two on a camping trip.

3: For the home user: Baratza Encore

The Baratza Encore is an everyday workhorse that will give you consistent grinds quickly and quietly. And that at a fair cost, too.

The Baratza Encore can produce even grinds along 40 different settings, anywhere from super-fine to coarse. For an Aeropress, this will most likely be between a medium to fine, which is where the Baratza Encore shines. Even though more expensive grinders can offer more consistent coarse grinds, the benefits to a finer grind are much less noticeable.

The Baratza Encore also offers incredible ease of use, displaying a large front-end pulse button and adjustable grind size, both intuitive to use even for the newest brewers.

If this has not convinced you yet, Baratza is famous for having fantastic customer service, especially in replacing worn out parts. Since it supplies so much of the world with high-quality grinders, replacing parts is no big deal.

The cons to include are that the Baratza Encore does come with a plastic brew basket and bean hopper, which can become staticky and have ground beans cling to their surfaces. This can be resolved with either a brush or some gentle tapping.

It is also louder than a manual grinder, which is to be expected. However, the noise level is about the same as other electric burr grinders.

The Ultimate Guide to the Aeropress

The Best Coffee Beans for the Aeropress

Review of the Aerobie Aeropress