Click for latest price 👆
This grinder is a capable step up from a blade grinder or pre-ground coffee. The design is cute and retro and the price is just about right. If you're serious about getting into coffee, however, you'll probably want to upgrade to something with more precision and consistency soon.

Ah, the good old Cuisinart Supreme coffee grinder. This one brings back memories, as it was the second burr grinder I owned, back when I was just getting into coffee.

I can’t totally recall the buying process, but I think I mostly bought it due to the combination of cute retro looks and a low price.

But looks can be deceiving – it isn’t really better than the much more janky looking grinders in the same price class.

This grinder can be a good choice for someone who is not willing to invest much into coffee but would like to upgrade from a blade grinder.

It is a no-frills, basic grinder that does its job, but it’s pretty far from a professional machine.

This Cuisinart DBM-8 Supreme Coffee Grinder review will explore some of its features, advantages, and disadvantages.

Not all burrs are created equal

The main reason to choose this grinder over the run-of-the-mill blade grinder is that the Cuisinart Supreme grinder employs burrs to grind its coffee.

This means that it crushes the coffee beans rather than chopping them up with metal blades. This offers two distinct advantages, which may be worth the upgrade depending on how picky you are about coffee.

A burr grinder produces particles with a much more consistent size than a blade grinder does.

This means that each particle of coffee is roughly the same size, regardless of coarseness. Having a relatively uniform grind size is necessary to control the extraction of flavors from the coffee and to avoid unwanted bitterness or harsh flavors.

It should be noted that the Supreme uses ‘block’ burrs (or ‘disc’ burrs). These kind of burr are inferior to conical or flat burrs and unfortunately, they do produce more fines.

Block burrs tend to be small and flat, and they have tiny protruding knobs that help to crush the beans. It’s more consistent than the spinning blades of the ultra cheap “nut chopper” type of coffee mill, but still a bit below a proper set of conical burrs.

The burrs also generate less heat via friction compared to a blade grinder. This means that the coffee will not be heated up and have its flavors altered, which is important to the purist who wants to taste the bean as intended.

Price. This grinder is almost constantly on sale and can regularly be found at half price or less. That means that it doesn't cost much more than the average blade grinder.

Durability. Most electric grinders at this price point will fall apart after a month or two, but this one seems to be built to last.

This grinder has great style and definitely looks the part of a professional grinder.

Honestly, the build quality of this grinder is only mediocre. It is built to last longer than most grinders at its price point, but still uses many plastic parts that can seem flimsy.

The stainless steel finish is slick and looks professional, regardless of whether its capacity isn’t exactly up to that level, and the design is classic. The large bean hopper and grind chamber are serviceable and fairly large, allowing for larger amounts of beans to be ground at once.

It’s hard to me to say anything about long term durability. I only used the grinder less than year, since it broke. This was entirely my own fault – I had tried to “mod” it to grind for espresso (yes, back then I was pretty naive😳) by inserting shims and the gears broke not long after that. So if you get this model, don’t do anything like that!

The Cuisinart Supreme is extremely easy to use. It operates with a single button and a dial that determines coarseness.

Since there aren’t any extraordinary features, it is almost impossible to misuse the grinder. Cleaning the grinder is also fairly easy with its removable bean hopper and grind chamber.

The grinder also comes with a cleaning brush, which is nifty but no different than using a toothbrush. The manufacturer boasts that the grind chamber holds enough coffee for 32 cups of coffee, but this really depends on the brewing method.

The grinds produced by this grinder, while superior to those of blade grinders, leaves a lot to be desired. This is especially true at coarser settings, which will most likely come with a “dust” of superfine coffee grounds that can be over extracted and lend some bitter flavors to your cup.

It also does not seem to offer very specific coarsenesses of grounds. There is definitely a “coarse” setting and a “fine” setting, but everything in between seems to produce a similar level of coarseness.

The grounds seem to be more consistent from a medium to fine setting, which is expected of a lower-end model. Those who would use this exclusively for a French press or another brewing method using coarse grinds would be better-suited upgrading or looking for a manual burr grinder.

The Cuisinart DBM-8 coffee grinder does not provide quite the precision that an experienced coffee snob would want out of a grinder due to its inferior ‘block’ burr set.

Customizing the coarseness of your grounds to a variety of brewing methods is not something this grinder can really handle, and it does not offer enough of a range for experimentation.

This grinder is also extremely loud – like a jackhammer. This can be a problem if you are brewing coffee every morning and wake up the entire house.

Customer service seems also to be an issue with this grinder. Because of its low cost, the manufacturer assumes you will replace the unit if it malfunctions rather than replace its parts. Overall, the machine seems as though it will work for some time, but is not meant to be used for years like a higher end model would be.

are there any Alternatives? 🧐

The Cuisinart DBM-8 actually is a very solid deal around its price range. But if you're gonna use your coffee grinder for every day, the next many years, it makes sense to take a peak at some of the models, just one price level above.

Baratza doesn't need much of an introduction. This brand very popular in coffee shops and among the high level coffee snobs.

The Baratza Encore is the company's cheapest model, but it still delivers a consistent grind across many settings.

If you want something that will potentially last you many years, this is an excellent choice!

Read our full review of this grinder-classic right here.

If you don't have a lot of money to spend, going with a handgrinder is a great idea. You get a LOT for your money with this type of product.

The new and upgraded Hario Skerton Pro delivers good usability and a decent consistency at a very competitive price. Plus, it's also great for traveling.

It's only slightly more expensive than the Cuisinart Supreme, but the grind is more consistent. 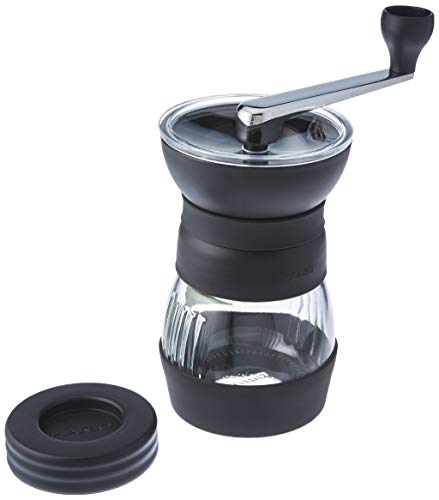 The Cuisinart DBM-8 Supreme is a below-entry-level electric burr grinder that is about a quarter of the price of most beginner electric burr grinders. This necessarily means that the grind consistency will not measure up to something like a Baratza Encore. This also means that the grinder itself contains many more fragile parts that can malfunction.

This model is perfect for someone who is afraid to invest a significant amount of money into a burr grinder but is curious and would like to experiment. It would also work well as a grinder with training wheels – something that you eventually upgrade from.