The new portable hand grinder from 1Zpresso should be on your radar whether you’re looking for a travel grinder or a good all-rounder.

The market for manual coffee grinders has exploded in recent years. The Taiwanese brand 1Zpresso is partly responsible for this.

They don’t quite operate like their colleagues in the coffee industry with slow iterative updates. Instead, the company releases new products as often as certain smart-phone brands. Today, they have a range of different models at different price levels, for different purposes.

1Zpresso launched their Mini Q grinder series a few years ago, which can be seen as either a small travel grinder, or an affordable every day grinder, depending on who you ask.

Now the company is back with the succesor, the Q2.

In this review we’ll look at the pros and cons, and also talk about the different burr sets available for the Q2.

1Zpresso is a Taiwanese brand. I encountered them first when I attended the Taipei Coffee Expo in 2017 and dropped by their booth.

Already back then, the grinders stood out in terms of engineering, quality, and price. However, at these industry gatherings, you encounter a lot of exciting startups, and it’s difficult to tell which ones, are here to stay.

Now, almost two years later, it’s evident that 1Zpresso is here to stay. They recently entered the Western market, and the brand name is already well-known among my Asian coffee geek friends.

At the moment, the company only produces hand grinders and a single manual espresso maker. This narrow focus is good; it means that the company can innovate and improve, rather than just copying last years fashion.

The company also launched the 1Zpresso Jx in 2019, which is one of my favorite handgrinders ever. 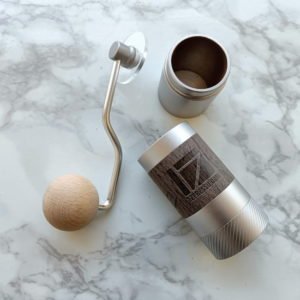 The 1Zpresso Mini Q (*now it’s called 1Zpresso Q2) is the company’s smallest grinder. The size is perfect for those looking for a travel companion.

However, manual grinders are a little bit like smartphones. In recent years, they have gotten bigger and bigger, to the point where terms like “small, compact and mini’ almost don’t make sense anymore.

If you’re a frequent traveler only using carry on luggage, these grinders will take up a significant amount of your weight allowance.

The Q2 isn’t precisely featherweight at 405 grams; however, for most people, it would be perfectly acceptable.

Weight isn’t the only thing that matters, however. Size is also important. And with a diameter of only 4,6 centimeters the Q2 fits perfectly inside and an Aeropress. This is something I know many of my fellow coffee geek appreciate.

The slim diameter also means that the grinder is lovely to handle in daily use. Models such as 1Zpresso J-Max or the Comandante C-40 MK3 can be slightly unwieldy for people with small hands, but the Q2 should be suitable for all people.

Only a travel grinder?

One of the things I was wondering about in the beginning was whether this was only a travel grinder, or if it could make the cut as an everyday mill.

By now I’m pretty convinced that it would work well as the daily workhorse grinder for most people.

Officially, the brand says that the hopper capacity is between 15-20 grams, but I have found that to be on the conservative side. If you’re using a light roast, you should be able to squeeze in 23-24 grams.

If the upper limit had been the 18-20 grams, I would hesitate to recommend it as the daily grinder but with up to 24 grams that should suffice for many specialty coffee geeks.

Of course, everything is relative, and you might make a 1-liter French press every morning. In that case, you’d probably be served better with an electric grinder or a hand grind with an enormous capacity such as the Lido 3.

But if you mainly do pour overs and AeroPress the capacity of the Q2 should be sufficient.

The 1Zpresso Q2 is a rather minimalistic and beautiful grinder. The exterior is a brushed aluminum alloy with a grip zone made of a slightly textured faux-wood.

The internals consists of a 38 mm conical burr set made of ‘grade 420’ stainless steel, an alloy with high hardness and corrosion resistance. Assuming that you grind a pound of coffee every week, the burrs should stay sharp for up to a decade.

Pro-Tip: There are two different models out there. A pentagonal burr set (5 core) and a heptagonal set (7 core). Each burr set has slightly different qualities in the cup, but more about that later

The curved handle is a pleasure to use, and is a nice upgrade from the first generation of the grinder (called the Mini  Q).

This level of smoothness makes it a completely different experience to operate compared to entry-level models such as Hario Skerton or Porlex Mini.

The wooden knob on the handle is a nice touch, and in fact, it’s magnetic so you can take it off for better portability.

The dial of the burr is numbered, which makes it easier to adjust than many other hand grinders. The dial is located directly underneath the burr, and it’s quite simple to change.

However, there are models out there that are easier to adjust, such as 1Zpresso’s top models in the K and J series.

The grounds bin itself is relatively simple. It screws on and off easily, and doesn’t create much static.

All of these things aren’t groundbreaking in themselves, but the combined package is still lovely. When it comes to build quality, materials and design, 1Zpresso Q2 rivals grinders at double the price.

One thing is the fantastic build quality and design; another is whether it grinds well.

The 1Zpresso Q is not the most consistent grinder in the world, but it’s also not the worst one. Overall, I’d say it’s a strong mid-level performer.

Right out of the box, the burrs are incredibly sharp. Contrary to what you might think this isn’t the best thing for grind consistency, as it tends to create a lot of fines. For that reason, you need to season the burrs. It’s similar to the way you’d break in a new pair of shoes.

If you don’t do anything special, it might take one or two months before you’ll see the best results from the grinder.

I ran a few pounds of minute-rice through it, and that seemed to reduce fines quite a lot.

Overall, this grinder will serve you well when it comes to brewing methods such as the French press, pour over, Aeropress, and so on. I haven’t attempted to grind for espresso, and the company doesn’t encourage it.

The flavor separation and clarity is good, although I have tried better ones. I have been comparing the grind consistency to the Lido 3 both visually and with the the help of software, and it seems that the particle distribution is very similar.

In terms of speed, I’m quite pleased. Grinding 20 grams of light roast coffee takes about 45 seconds. That’s quite fast and again similar to the much larger and more imposing Lido 3.

1Zpresso offers the Q2 with two different burr sets in Taiwan and China. However, for the Western market currently only the pentagonal burr set is offered. That begs the question; what are we missing out on? I was curious about this question, so I went ahead and bought a Q2 with the 7-sided burr set from the Chinese market.

There’s clearly a difference between the two burrs, and they will benefit two different brewing styles.

The heptagonal burr does produce a particle distribution that works well for lighter roasted coffees at higher extractions. So if you’re into scandinavian roasters and brew at 1:17 ratio, I’d recommend that you go for it even though it’s more troublesome to order your grinder from somewhere like Aliexpress.

However, if you prefer a typical medium to medium-light roast and brewing at a standard 1:15 ratio, then I think the standard burr set will be just fine for your needs.

Another, difference worth noting is that you can make great espresso shots with the heptagonal burrs. Yes, it takes very long to grind a dose (around 1 minutes and 40 seconds) but the shots do taste excellent.

Alternatives: 1zpresso vs Hario vs Timemore

The 1Zpresso Mini Q places itself at just the right price. Yes, it’s more expensive than my previous entry-level favorite Hario Skerton Pro, but the value you are getting is incredible in comparison. No glass, no ceramic burrs, and minimal plastic. Instead, you’re getting aluminum, hardened stainless steel, and wood.

If you’re looking for a daily workhorse grinder at a reasonable price, I’d however encourage you to consider the Jx model from 1Zpresso. It’s not much more expensive and you get a bigger capacity and much faster and more consistent burrs.

If you’re looking for a small manual grinder that is great addition to your travel coffee kit and also suitable for daily use (if you’re mainly brewing for one person), the 1Zpresso Q2 is an excellent choice.

The price/quality-ratio of the grinder makes it an attractive option.

The Mini Q feels good in the hand and it’s built like it’s going to last for years.

As far as the grind quality, it’s more than satisfactory. However, if you’re a super picky coffee snob who already has had a few quality grinders, you might want to look at its big brothers; the Jx and K-Plus that both use more precise 48 mm burrs, or consider the more rare version that you can only get on the Chinese market 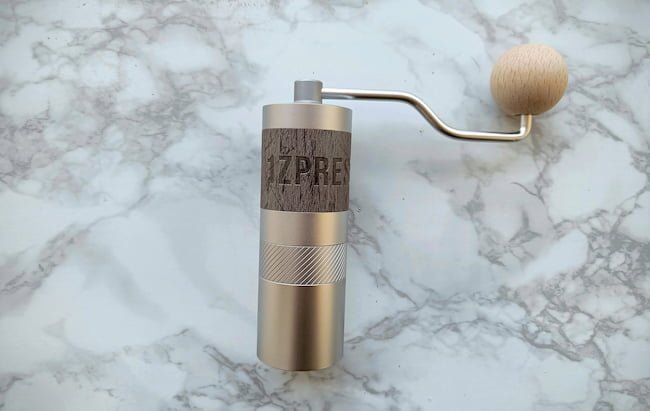