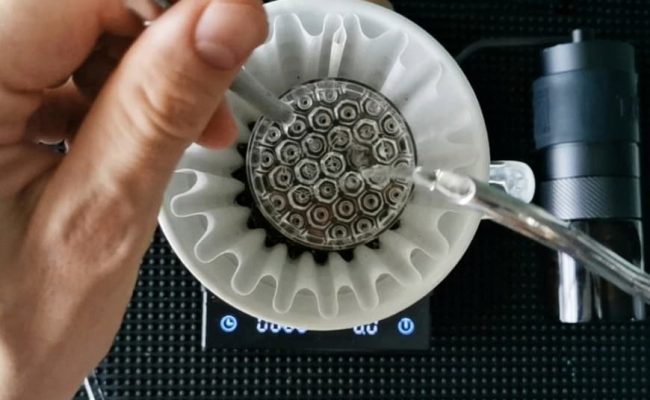 Melodrip is a tool that makes your pour over coffee cleaner and brighter. Say goodbye to unwanted agitation.

The Melodrip is a small tool that has built a cult-like following on Instagram. It looks quirky and futuristic at the same time. Imagine a petri dish that had a child with a beehive, and you have the Melodrip.

The goal of this product is to make your pour over coffee taste better by reducing agitation. If you have been reading this blog for a while, you know that I also happen to see agitation as one of the main culprits when it comes to subpar pour over.

In this review, I’ll take a closer look at the Melodrip. I will also compare it carefully to the Gabi Drip Master B, a similar tool, and help you decide which one you should get.

Like so many other modern coffee companies, the Melodrip began its journey on Kickstarter. The campaign was fully funded in early 2018, and the product has since made its way to users all over the globe.

Ray Murakawa, the founder of the company, is a dedicated home brewer, who realized that gooseneck kettles are way more inaccurate than they appear to be. Even the thin stream from a spout held close to the brewer would introduce some agitation to the brew bed. This leads to less repeatable brews.

Another goal of the Melodrip is to reduce the number of micro-particles (aka fines) that get churned up while brewing. According to the company, some of these fines can drain through the paper filter. The softer droplets from the MD (as users affectionately call it) mitigates that.

People have been talking about stuff like flow rate and ‘pouring technique’ for some time, but most of the discussions have been anecdotal. There’s no industry-wide consensus about agitation and the correct pour. So just as a proof-of-concept, the Melodrip is extremely valuable. Much in the same way as the Kruve sifter has been regarding other coffee-discussions.

That also seems to be the sentiment of the founder, who does a wide range of shareworthy coffee experiments on the brand’s IG account. He also appears to be in close contact with the userbase of the product.

The Melodrip comes in a striking triangular-shaped box. It’s evident that even the packaging is the result of numerous design hours. It has pink accents and a slightly Japanese vibe. Inside the box, there’s a glass swizzle stick and the Melodrip.

The stirring stick is made of borosilicate glass, and it actually works well. Compared to something like a teaspoon, it’s more precise and fewer grounds cling to it. However, being made of glass, I am a little worried about how it will handle the rough life on my countertop.

The Melodrip itself consists of a stainless steel handle attached to a plastic disk made of the food-safe Eastman Tritan material.

Even though it’s a tiny tool, it feels solid and well-made.

Again, I have to mention the aesthetic factor of the product. It looks good and feels comfortable in hand.

But one thing looks; another is actual use. At first, it’s a little bit awkward to hold an additional tool in the hand when brewing. Already pouring carefully with a gooseneck kettle can be stressful enough, so suddenly, holding a chopstick with a disk attached close to the slurry is a bit challenging.

You still have to control the stream while using the Melodrip — if you only pour in the same spot, only a few holes will be activated, not resulting in the shower-like effect that’s intended.

However, after just a few brews, you get the handle of things. Despite taking some of the art and flair out of controlling the kettle, it’s still fun to brew with.

The cups I made tasted excellent, and have that bright, clean, and ‘precise’ aftertaste that brews with controlled agitation have.

Compared to Gabi Master B

Long-time readers of this blog will know that I have been a big fan of a similar device called Gabi Dripmaster B for a while. So how do these two products compare? Well, they are more different than you’d assume.

The Melodrip is a cool gadget that lives up to its intentions. It’s fun to brew with and an upgrade compared to just using a kettle.

This product is for people who like the brewing process. It’s not a tool that takes all work out of making pour over. If anything, it probably takes a somewhat experienced brewer to use it to the fullest potential.

However, if you’re looking for a way to control agitation to make pour over coffee more repeatable and straightforward, the Dripmaster B is the one I’d personally recommend.

Learn more about the Melodrip here.