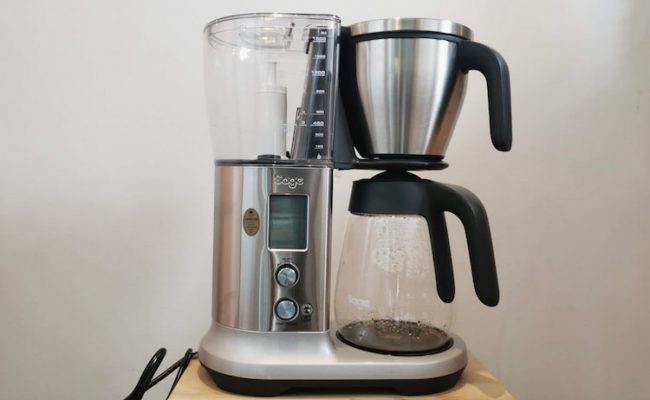 Breville’s coffee maker is extremely sophisticated, but has some major flaws when it comes to the basics.

It’s as if they somehow have come to symbolize that awful, slowly evaporating, supermarket coffee we drank all through the 90’s until we took matter into our own hands and became fully-fledged coffee geeks.

Instead, what came to represent us was the small, carefully crafted pour over brew.

This is also the case for me: I have made a lot more pour overs than drip coffee batches during my time as a coffee lover.

It seems that the Breville Precision Brewer is created exactly with this subset of people in mind.

In this review, I’ll give you my coffee geek perspective on the Precision brewer. 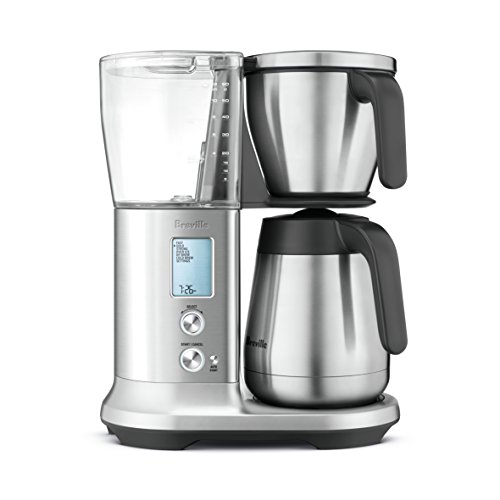 1,183 Reviews
Breville Precision Brewer
Advanced tech, yet easy to use. Almost amazing but it still has a few flaws .
See more reviews

Breville is an innovative kitchen appliance company hailing from Australia.

For copyright reasons, they can’t use their original name in Europe (which is where I purchased the test unit), so their models in that part of the world are sold under the brand name “Sage.”

In general, their ovens and blenders are quite well-esteemed among foodies, but for whatever reason, some coffee lovers have always been a bit on the fence.

I think many coffee geeks have that “indie” mindset where all big companies are bad, and it’s better to use a product from either an edgy crowdfunding company or a Japanese heritage brand.

But that mindset can be a little bit silly at times.

It’s difficult to make advanced products such as espresso machines, so a company needs a certain size to be able to do proper R&D.

In my opinion, there’s no doubt that Breville/Sage offers some innovative products, especially in the espresso category.

The Precision Brewer actually uses a lot of the same technology as the espresso line, so it’s interesting to see how it carries over into a different type of product.

However, there have also been stories of disappointing customer service, and a lack of DIY replacement parts connected to Breville’s name.

Most notably, the company’s espresso grinders had a tendency to get problems. A specific part (the impeller) would get worn out consistently, and since Breville doesn’t offer a replacement, customers have had to buy a 3D printed one from Shapeways.

The Breville Precision Brewer looks like a typical Breville product. It has a nice, although slightly pedestrian, design.

Is it better or worse compared to competitors such as Moccamaster and Oxo? I’d say it’s about the same in terms of looks.

It’s a metallic and greyish color with rounded shapes.

This thing is BIG, though. It takes up more space than most other domestic coffee makers. At 12.4 (31 cm) wide and 15.7 inches (40 cm) wide tall, you need some extra countertop space.

The reason for the size is pretty apparent. It’s a 12-cup coffee maker, which translates into a capacity of 60 oz/1.7 liters. If you want a big water tank and carafe, it’s going to be a bulky product.

Since I used the European version sold under the “Sage” name my unit used celsius instead of Fahrenheit, and there are some additional measurements using the metric system on the water container. It also comes with a water filter in Europe to prevent scale build-up from the very hard Northern European water.

This model comes in two versions: One with a thermal carafe and one with a glass carafe. Personally, I have a strong preference for brewing coffee in a glass carafe whenever possible.

Still, it might be more sensible to opt for the metal version since some users have complained that it’s impossible to get a replacement carafe should you have any accidents.

Yes, the item is listed as a spare part on Breville’s website, but apparently, it has been unavailable for a long enough period to seriously annoy some customers. 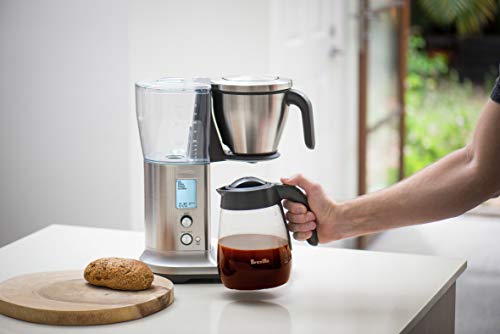 Anybody with a glass carafe knows that sooner or later, accidents tend to happen. So you don’t want to buy a coffee maker worth several hundred dollars and not be able to use it, just because Breville can’t get their s*** together 😠

The glass version has a heat plate, but the thermal carafe version doesn’t. Besides that, the two brewers are identical.

Most drip coffee makers build on the same theme, so what makes the Breville Precision Brewer stand out? The fact that this device has a lot more “smart” functions. In many ways, Breville has taken the technology of one of their advanced espresso machines and put it into this coffee maker.

You can adjust almost every single aspect, so it suits your preferences. The most exciting and unusual thing here is that you can manually adjust the temperature. This is possible because a PID is built into the device.

Many espresso machines under $1000 don’t have a PID, so, interestingly, Breville has added this function to their coffee maker.

Many espresso machines under $1000 don’t have a PID, so, interestingly, Breville has added this function to their coffee maker.

In real life, it has considerable significance. To be approved by the SCA, a coffee maker has to brew consistently at 200 F. This temperature is suitable for most medium-light roast coffee. However, with Breville’s increased temperature control, you can lower the temperature for full city roasts and increase it for proper light roasts (city roasts). The ability to play with this gave me some amazingly flavorful cups during the tasting period.

I even tried some generic Colombian supermarket coffee, barely specialty grade, which tasted quite pleasant and mild after a custom brew cycle adjusted to 188 F / 87 C. This was done purposefully to avoid bitterness.

The manual adjustment mechanism is intuitive and easy to use with the spinning wheel and bright display.

Of course, there are few other aspects to play with, such as bloom time, bloom volume, and flow rate. While these things are fun to control, I see them more related to the volume you’re brewing.

For example, if you’re brewing 2 cups, which is considered a tiny batch on this coffee maker, then it would make sense to use the smallest bloom adjusted to 45 seconds, plus a slower flow rate. These things will help you stretch out the brew and ensure a better extraction.

The Breville/Sage Precision Brewer offers unique control over the brewing process. As a coffee geek, this is very appealing. I think you can get great results with both very light and darker roasts on this machine.

Most of my brews have been between 400 and 1000 ml with the cone-shaped insert. The extraction yield has consistently been in the 19-20% range without any special effort on my part.

It’s a sturdy device, and it feels more like an espresso machine rather than a drip coffee maker.

In a sense, it’s almost overpowered and overspec’ed. But that’s also reassuring. You know that you’ll be able to brew a massive batch of coffee consistently.

In a sense, it’s almost overpowered and overspec’ed. But that’s also reassuring. You know that you’ll be able to brew a massive batch of coffee consistently.

The user experience is also quite pleasurable in daily life:

The water tank is big and easy to fill.

The carafe and “drip” lock mechanism work well together. So there’s no dripping when you take a “sneak” cup, and when you slide back the carafe, it fits nicely.

There’s a loud beep when the coffee is ready. A timer starts so you can see how long the coffee has been sitting.

Now let’s talk a bit about the downsides to the machine.

And I also have a few pretty minor complaints:

So who should get a drip coffee maker like this?

Well, if you make a few cups of coffee in the morning for yourself or a partner, I think it makes more sense to stick with pour over, AeroPress, or whatever you’re doing already. It’s not like this brewing device will open up new nuances that you can’t reach with manual brewing.

I guess it’s also a matter of preference and convenience. I think it’s one of life’s joys to brew coffee, so for me, it’s often better to brew two batches of 500 ml’s in the morning.

However, you might have different priorities. If you’re busy or see it as a bit of a chore to spend too much time doing all those small things that are a necessary part of the coffee ritual, then you could brew a big batch of delicious coffee and keep it warm for the remaining portion of the morning.

If you’re often finding yourself making coffee for more people, then you’re the target audience for a drip coffee maker, and this one should be on your radar. If you have a coffee crazy family, it would be very suitable.

12 cups don’t sound like a huge batch, but actually, it’s a substantial amount of coffee!

Most drip coffee makers are listed as 8-10 cups.

If you need a coffee maker for a small office or a semi-commercial setting, where you need a certain quality standard, then it makes sense as well.

I was pleasantly surprised by this coffee maker. Domestic drip coffee makers haven’t played a significant role in third-wave coffee, and that isn’t surprising.

But Breville’s Precision Brewer does add some much-needed fun and flexibility to this type of coffee making.

The extraction yield and flavor were good to excellent in most of my brews (except the first few trial runs), and overall the user experience is quite lovely.

If you’re the kind of person who needs a 12 cup coffee maker, and you also want that little extra power under the hood, then I think you can be confident that this model will serve you well.

Just keep an eye on the replacement glass carafe situation (is it back in stock?) or get the thermal version if you want to be on the safe side.

👉 Check the current price on Amazon