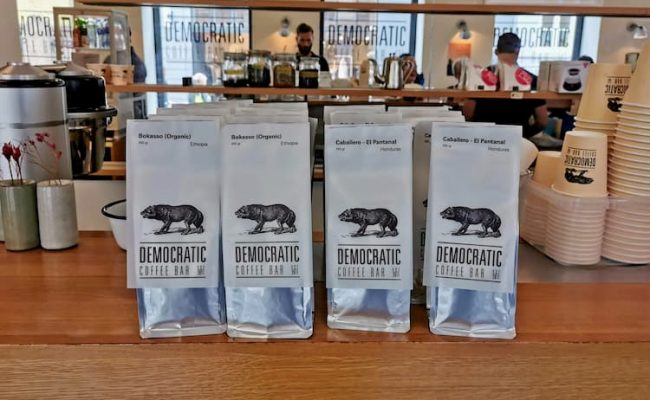 In the last couple of decades, Denmark has achieved a reputation as kind of a mecca for specialty coffee lovers. What is the reason?

Last year, a journalist asked me to help her with an article about Nordic coffee. More specifically, she had some questions about the history of coffee in Denmark. This gave me a chance to read up on a bunch of old tales that I had no clue about.

There’s a lot of hype and mystique surrounding Nordic coffee, but the beginnings are also fascinating. Dwelling more on it, I realized that there is a sort of ‘coffee paradox’ in Denmark and the rest of the Nordic countries. But to understand the paradox, you also have to know the history.

There are a lot of common myths about Nordic light roasts, so if you’re wondering what it’s all about, then this article is for you. Naturally, I’ll mostly focus on Denmark, but there’s a lot of overlap between the Scandinavian countries.

From luxury to factory fuel

Coffee was brought to Europe for the firs time in 1615 by traders from Venice. The first record we have of coffee on Danish soil is 1665. Around the same time, tea and tobacco also arrived.

There’s a terrific book about Danish coffee written by historian Annette Hoff. That book is the primary source for this brief overview of Danish coffee history.

For the first century, after its introduction, only the nobility could afford luxuries like coffee, and they actually preferred tea. So even though coffee was consumed at weddings and special occasions, it wasn’t a staple yet.

However, sometime during the 19th century, coffee became the most popular beverage in Denmark. The main reason was that farmers started to become more wealthy.

Back then, country-people occasionally drank tea made of local medicinal herbs. For that reason, they viewed tea as a beverage for sick people. To some degree, that is still how older generations see it today: Tea is for weaklings, while coffee is for healthy and active folks.

Back then, country-people occasionally drank tea made of local medicinal herbs. For that reason, they viewed tea as a beverage for sick people.

The beginnings of Danish coffee culture

Coffee fit perfectly into the rural farmer lifestyle, where you had to get up early and work hard.

When industrialization took place in the 19th and 20th centuries, and people from the countryside started to move into the cities to work in factories, they brought that coffee preference with them.

Since most of the Danish population were farmers just a few generations ago, we almost have that coffee preference. If not in our genes, then it’s in our culture.

Coffee had a rival among the working class, however, and it wasn’t tea. Many laborers loved brandy and other cheap kinds of booze.

Understandably, most housewives preferred that their husbands drank coffee instead. This led to unions and housewives associations supporting coffee consumption. They placed coffee trucks in central locations and near big factories.

Coffee as an institution

By the beginning of the 20th century, coffee was an essential part of normal, Danish life. In her book, Annette Hoff includes an account by a man born in 1888. Growing up in a low-income family, his parents could rarely afford meat, and the man had to start working full time at a tobacco factory at the age of 10. However, coffee was still consumed on a daily basis in the family.

Given that coffee has been an essential part of life in Denmark for more than a hundred years, it’s only natural that many social rituals have come to revolve around the beverage.

It’s a social lubricant: It’s less formal than dinner and more refreshing than drinking alcohol. Coffee with cakes or cookies is seen as an essential part of the famous Danish ‘hygge‘.

From around 1900 and the next half-century, a blue enamel percolation brewer called ‘Madam Blue’ was the primary brewing method in Denmark. Every home had one, and they tended to last for ages. If you go to a Danish flea market today, you’re sure to see one. They actually look almost identical to the kettle in this site’s logo, just cyan blue instead of orange.

Even though the paper filter was patented by Melitta Bentz back in the early 1900s, it didn’t reach its current shape until the 1930s. It started to become popular in Germany, but then the 2nd World War broke out.

So it actually took a while for the classic drip coffee maker to gain a foothold in Denmark.

Today around half of the Danes prefer filter coffee, while number two is the French press with only 15 %.

I haven’t seen any statistics, including pour-over coffee, but I suspect that it’s still quite rare.

While there were many small coffee roasters in the first half of the last century, they were more or less all consolidated by 1970, when vacuum-packed coffee started to become a thing. Many of these roasters still exist today: for example, Merrild and Peter Larsen.

In the last couple of decades, Denmark has achieved a reputation as kind of a mecca for specialty coffee lovers.

Denmark is indeed one of the countries with the highest consumption per capita. But the majority of that coffee is far from specialty grade.

Much of the reputation probably has to do with baristas from Denmark winning the World Barista Championship four times in its early days between 2000 and 2006.

It was also around that time the ‘third wave of coffee‘ movement began to take off. Norway also took home two titles in the same period, so somehow Scandinavia seemed to be interconnected with this new epoch for coffee.

Two prominent early champions were Tim Wendelboe and Klaus Thomsen, who are today seen as ambassadors of a certain Nordic approach to coffee.

The reality is that the World Barista Championship back then was nothing like it is today.

A few years back, I interviewed Fritz Storm — the 2002 champion — who told me that it’s questionable how much emphasis one should put on these early victories.

For instance, he said, he used Illy as his competition coffee — and so did his predecesor!

Also, the Scandinavian countries had a few advantages in the beginning: The competition was organised by Norwegians and it was mostly taking place in Western Europe and the US, so it naturally favored coffee people from affluent countries with English proficiency.

If you look at the specialty coffee pioneers of Denmark, such as The Coffee Collective, it’s easy to think that there’s a special preference for light roasts in Denmark. But actually, that’s pretty far from the truth.

Middle-aged people generally prefer full-bodied, medium roasts that can stand up to milk and sugar. The slightly younger people from Generation X formed their coffee preferences in the late nineties and early noughties.

They are used to even darker roasts since that’s when the Italian and American coffee culture started to blossom in Denmark. At a cafe, they will order an espresso or latte rather than a pour over.

In reality, most Danish people don’t care for light roasts. I experience that every time I brew coffee at family gatherings. I’m told that it’s “tea-like,” which is not meant as a compliment.

There’s an interesting story to back up this point. A few years ago, Copenhagen-based Noma began serving pour over brewed on Tim Wendelboe-beans.

Even though this is a restaurant that is famous for serving avant-garde Michelin food, they were met with massive pushback from both customers and food critics when serving lighter roast coffee. Noma-founder Rene Redzepi stated that the criticism was far harsher than when they served any of their many outrageously avantgarde dishes.

Specialty in a farmer culture

There’s a dozen of prominent roasters similar to Tim Wendelboe and The Coffee Collective in Scandinavia today.

They purchase the best green beans, and roast consistently good coffee. If you walk into a third wave coffee shop in Asia or North America, there’s a good chance you’ll see some Danish or Scandinavian coffee on the shelf.

Pro tip: If you want to get more familiar with Nordic roasters, just sign up to Kaffebox; a coffee club which only deals with the best modern roasters from Scandinavia.

However, these coffee brands don’t represent the general coffee culture. It’s more of an urban thing, catering to the young and well-heeled. While I can mostly talk for Denmark and Sweden, my understanding is that Norway is similar.

In a way, it’s similar to the ‘new‘ Nordic cuisine. Many of these famous restaurants located in Copenhagen and Stockholm brand themselves on ‘Nordic’ values, but the majority of the guests are globetrotting foodies, not locals.

Some are loyal to specific brands, and a few even grind the coffee at home, but for the majority, coffee is mostly a matter of price and convenience. Even though most of these supermarket blends tend to be 100% arabica, they are still a far cry from specialty grade.

The Future of Nordic coffee?

Where will the Danish coffee pendulum swing in the future?

It’s going to be interesting to see. On the one hand, the brands in Denmark, Sweden, and Norway are sourcing and roasting coffee on a high level. Similarly, their branding is among the best in the industry.

However, the national coffee preference is informed by several generations of habit. In a way, specialty coffee is the exact opposite of that farmer/worker style of coffee our ancestors consumed. This is also the case on a more symbolical level: Danish (and nordic) culture is about egalitarianism. About not standing out. About being average.

Specialty coffee, on the other hand, is about celebrating the unique and peculiar.

In countries where there’s no local coffee culture to speak of, people are much more open-minded to trying new things. We can see this in coffee-producing countries, where there’s suddenly a surge in national pride connected to the crop, which used to be part of a colonial agenda.

And precisely that is the paradox: Because the Nordic countries have such a long history with coffee, they also tend to be consverative.

The irony is that Nordic coffee is often put on a higher pedestal in these countries than back home.

My suspicion is that Danish and Scandinavian specialty brands are going to use their international recognition and branch out to new markets, just as Noma has done in the culinary world. Afterall, there are only around 21 million people living in the region.

I would be surprised if we don’t see more roasters follow in the heels of Norwegian brand Fuglen, and opening up roasteries in affluent parts of Asia in the coming years.