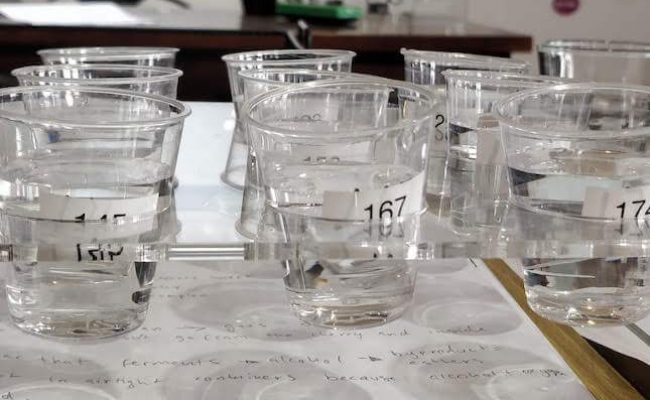 Is Coffee Art or Science?

Many coffee geeks are absorbed in ‘bro science’, when they should just focus on fun and flavor instead.

When you hang out in the most austere coffee geek circles, it won’t take long before you hear about esoteric things such as refractometers, malic acid, and volatile aroma compounds.

Coffee is fascinating because it can get so geeky. But there’s a dark side to all these measurements, tools, and theories.

Some coffee people take their fascination to an extreme. Before you know it the number on the refractometer is more important than the flavors in the cup. Theories come out of nowhere and start being disseminated blindly by well-intentioned followers.

In the bodybuilding community, this phenomenon has a name: It’s called “bro science.”

In coffee, we don’t yet have a name for it (maybe because most people in the community aren’t ‘bros’), yet it’s happening everywhere and all the time. I know because I’m guilty of this myself.

Still, I think it’s about time that we discuss what science can be used for and where it has its limitations.

Turn the brew bar into a lab

Why is coffee so appealing to people with a scientific inclination? I think part of the attraction is due to the few variables in coffee. You only have water and grounds. The rest is down to chemical and physical principles. At least that’s how it seems.

All this is fine with me. The problem starts when seemingly ‘scientific’ theories become the basis of brewing techniques. This happens constantly.

The aim of this article is not to refute all of these theories: rather, it’s to discuss the meta level. However to give you an example randomly pulled from memory, here’s one (no offense to the guy behind this maxim — he’s contributed to specialty coffee with a lot of great ideas, this is just not one of them).

You should always use 100°C/212°F water for maximizing extraction. The coffee was already roasted at far higher temperatures, so you’re not going to ‘burn’ the coffee.

On the surface, this theory makes sense. As anyone who has roasted coffee, knows, the beans undergo far higher temperatures in the roaster.

However, could it be that roasting green beans and using a solvent such as water are two different things?

Experienced coffee brewers have been recommending brew water around 93°C/200°F degrees for ages.

Some trustworthy coffee people such as Tetsu Kasuya and James Freeman of Blue Bottle even go as far as suggesting even lower temperatures for more developed beans (aka darker roasts).

In this situation, I probably wouldn’t listen to the ‘coffee bro science’.

The reason is simple: Coffee is about taste. If the same coffee tastes better with colder brew water, why use the ‘scientifically correct’ water at a rolling boil?

Let’s jump to a related topic that we all like and understand intuitively: food.

When poaching eggs, the difference between a good and bad one is pretty dramatic – even though it’s a minimalist dish cooked in less than 5 minutes.

One of the things that separate amateurs from pros when poaching eggs is the temperature of the water. Most chefs agree that somewhere around 167 °F / 75 °C is where the magic happens.

One could argue that it would be a lot more efficient to cook the egg at higher temperatures, but it simply doesn’t matter: Our taste buds give us the correct answer. Not the scientific papers.

Time for some imaginary Iron Chef

Close your eyes and imagine two persons in front of you. On the one hand, you have Richard Dawkins; a supremely rational being who knows every little detail about evolutionary biology. However, in this thought experiment, we have upgraded him a little: Dawkins has supplemented his academic background with a ph.d. in Gastronomy Studies.

On the other side of the table, you have Gordon Ramsay; famous for not being able to utter a word without swearing, and running a bunch of Michelin restaurants.

Now the question is simple: Who do you want to cook your brunch?

It’s an easy question if you ask me. Gordon Ramsay might be a bit of a dick but no doubt that his bacon will be crisp and that his scrambled eggs will have the right amount of salt. He might not know the chemical names for the different amino acids in the hollandaise sauce but you can rest assured that it’s cooked to perfection.

I can’t say the same for Dawkins. Sure, he might know many theories, but I really have a hard time seeing him season to taste and multitasking.

We can iterate this thought experiment in many different scenarios, and most of the time, the answer will be that we intuitively prefer the craftsman and not a scientist.

The answer to all these questions is that you want the artisan; the person with hands-on, real life experience.

However, if you had some ultra-specific task, like deciding between two different ways of vacuum packing coffee, the scientist might be the right guy to ask.

When we use the culinary simile, it’s easy to see that coffee is closer to a craft than a science.

It doesn’t mean that we can’t use brainy theories and empirical experiments; it’s just that we should be way more careful about applying them to our day to day brewing.

Also, please note, that being a craftsperson doesn’t imply a lack of rigorousness. I think it’s commendable to use a digital scale when brewing a V60. Likewise, I’m sure Gordon Ramsay isn’t just eyeballing the amount of flour and eggs he puts into his lasagna sheets.

So next time you hear somebody saying that you have to brew a certain way because it’s more ‘scientific,’ ask yourself if you would accept cooking advice based on similar reasoning.

Realize that coffee and food is about taste. If the alleged ‘improvement’ isn’t about taste but rather about fluffy concepts such as ‘evenness’ or ‘more full extraction’ I would be sceptical.

There’s not one single way to cook potatoes. French fries taste good but so do wedges and the mashed ones.

If you ask me, coffee is a lot closer to cooking than to chemistry.