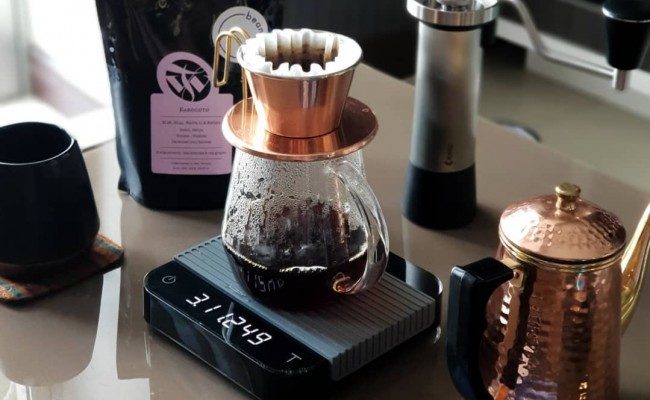 Stalling pour overs is probably the most frustrating thing when it comes to manual brewing. This is a problem that most manual brewers will encounter sooner or later.

You think you’re going to brew a delicious Ethiopian with a perfectly even brew bed, but instead, your dripper looks like a clogged sink.

And when the brew has finally drained after 6 minutes, there’s a layer of silt on top of the grounds.

This is a problem that most manual brewers will encounter sooner or later. In fact, stalling (aka choking or clogging of the filter) it’s one of the topics I get asked about most frequently.

In itself, long brew times aren’t problematic; you must account for them before you start brewing.

The issue with stalling is that it’s usually a sign that you’re over extracting the fines (the micro dust that always comes when grinding coffee).

Stalling tastes bad because it interferes with other variables in your brew. It’s almost always unpleasant.

However, after implementing these fixes, I’d say you have a lot less to worry about. When you know what to look for, clogging is actually a very simple thing to fix. I rarely encounter this problem nowadays.

Here are the main culprits when it comes to stalling.

Pour over is an act of balance. Sometimes you want to pour gently and at other times aggressively. One of the main reasons for stalling brews is that the brew bed gets churned up by pulse pours that are too powerful.

This causes the ultrafine particles to clog up the pores of the filter. They become an additional filter that the water has to pass through; thus, the drain rate slows down.

If you’re not careful, the stream of the kettle will work like a swizzle stick. This is essential, no matter what technique you’re using. However, if you’re using a pulse pour technique, you should be extra cautious.

You can mitigate this issue by using a dispersion tool like the Melodrip or the Gabi Dripmaster.

#2: Bad grinder or going too fine

Clogging filters is something that beginners are especially prone to, and it’s no coincidence since they also tend to have pretty inconsistent grinders.

When you’re experiencing trouble with clogging, one of the first things to consider is whether you’re grinding too fine. Often the solution is just to go a few notches coarser.

When you see many recipes shared online by various coffee gurus, they usually assume that you have a grinder on par with the one they’re using. Which generally means something semi-pro or above.

Because these grinders produce fewer microparticles, they can grind fine without issues. But if you’re using a blade grinder or an entry-level burr grinder, you most likely won’t be able to do the same.

Usually, the solution is to go a bit coarser and increase your brew ratio (or invest in a better grinder).

You might have to use a stronger brew ratio if going coarser — this will compensate for the lower extraction yield.

For beginners, the main reasons for clogging are the combination of too aggressive pouring and a lousy grinder.

For a while, I have been a vocal critic of the “new” Hario V60 filter, and even though the quality is a bit better than previously, they are still prone to clogging.

The old filters that Hario used to sell had a lot of crepe on the inside. This texture made them more forgiving when brewing since the extra surface area gave something for the ultrafine particles to cling on to.

Further Reading: The Evolution of Pour Over Coffee

Besides that, even without any coffee in the filter, they had a faster flow rate.

However, this is an easy fix. Just use the Cafec Abaca filter instead of Hario’s version, and you’re over the problem.

Sometimes the brewer you’re using can be the problem. It doesn’t often happen since most third wave drippers are optimized to have a consistent flow rate.

However, one model is especially likely to choke, which is the stainless steel version of the Kalita Wave. This happens because the indentations of the bottom of the dripper are too shallow. After a few pours, the wet paper filter will slowly collapse and block all three drain holes. This creates an airlock, so the drain is excruciatingly slow.

Besides suffering from this issue, the flow rate is also a lot slower compared to the other Kalitas. When you think about it, it’s pretty nuts that such a popular product can have so many flaws.

You can read more about the issue with the Kalita Wave in this article.

But again, this is an easy fix. Just don’t use the stainless steel version, and you’ll be fine. The glass and ceramic versions work much better.

The last problem is the most tricky one to fix. Often the most aromatic coffees are roasted very light. This helps to accentuate the floral and fruity notes. However, these coffees are also very dense, since they typically grow at high altitudes.

When this type of coffee is ground, it tends to produce more fines compared to other beans. What happens is something like this: The soft coffee bean will be ‘cut’ by the burrs of the grinder, whereas the dense one, is more likely to be crushed or shattered when it meets the burrs.

This is the most difficult thing to fix, but your chances of success increase manifold if you already master steps 1-4.

Besides all the reasons mentioned above, there are few other things, you can do in order to avoid choked brews. The tips below are especially helpful when it comes to really light, dense beans that will choke the filter no matter what.