I Tried Starbucks’ Blonde Roast (So You Don’t Have to)

When Starbucks talks about light roasts, there’s reason to be sceptical. In this post I take a close look at the so-called
‘blonde roast.’

In the secluded and geeky world of specialty coffee lovers, there is one brand that has particular notoriety.

It has a green mermaid logo and is pretty much single-handedly responsible for everything that’s wrong with coffee: From inventing stupid faux-Italian drink names, to ruining whole neighborhoods by forcing out small, artisan coffee shops.

Of course, we’re talking about Starbucks.

I have had their coffee on occasion, but like most coffee professionals, I think it’s pretty harsh. Overroasted, bitter, expensive — are some words that come to mind.

Then I went on holiday on a tropical island recently.  had packed my coffee equipment and a stash of specialty beans.

However, I had underestimated how much coffee I’d actually need for the trip, and somewhere in the middle, the disaster struck. I was out of beans!

There were only a few coffee shops on the island, and the only one that sold whole beans, as far as I could tell, was Starbucks.

A blonde roast is not light

On the shelf, among the many blends, one bag immediately stood out and peaked my interest: the Willow ‘blonde roast’ blend.

Allegedly, this is the company’s lightest roast.

According to the blurb on the bag, it had ‘juicy, lemony notes’ from the African coffee, and a ‘crisp finish courtesy of the Latin American beans.’

That’s not an origin; it’s more like two and half continents.

But I was desperate, so I decided to give it a try anyway.

There was no roast date on the bag; only a ‘best by’ date. Often commercial coffee roasters will just put a day one-year post-roast. Of course, this is way too long for coffee to rest on the shelf. 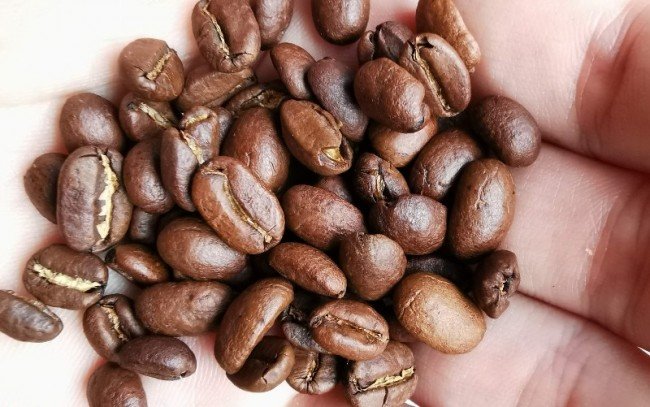 When I opened the bag, a lot of my fears were confirmed. The beans had an oily, shiny surface. Usually, this means that the coffee is either old or roasted dark.

Judging from the color of the beans, it had been a combination here.

With light roasts, the surface of the bean will look dry and uneven.

If this coffee was a blonde roast, it was definitely a dirty blonde.

I ground the coffee in my hand grinder. The beans were easy to crush, indicating a developed roast, close to second crack.

I brewed it in the Munieq Tetra Drip; one of my favorite travel coffee makers.

I’ll be honest; the first sip was pretty bad. There was a harsh, roasty note. Like the coffee had been burnt. However, the coffee did have some sweetness and a hint of lemon.

I let my girlfriend try a cup, and she immediately winced.

Even though none of us really liked the coffee, it was better than the alternative (not drinking any).

Over the days I experimented a bit more, trying to dial the Willow blend in.

I experimented with grinding finer and coarser, different water temperatures and so on.

Eventually, I ended up brewing the coffee more like an espresso in the Delter Coffee Press and actually got some decent results.

The Americano-like liquid had a bit of sweetness and juiciness. It was better than what you’d be served at a hotel morning buffet.

I could actually imagine that some of the beans in the blend were specialty grade, probably scoring around 81 points.

The willow blend is suitable for espresso

It was interesting trying a bag of this coffee, and it was a bit of lifesaver.

However, I think it’s going to be the last time with Starbucks blonde roast for me.

Overall, the roast was just too harsh. I know it sounds a bit sensitive, but that is the reality.

They call it light and ‘blonde,’ but I know many specialty roasters who wouldn’t even go this dark for their espresso beans.

Of course, everything is about perspective, and the typical Starbucks roast is close to charcoal.

On a sidenote: I think it’s weird that they don’t disclose more info on the bags.

Will I buy it again? Probably, only if I’m stuck on an island without other options.

It’s still preferable to no coffee.