Timemore Black Mirror Review: Is this the Acaia Killer?

This black beauty straddles the divide in the world of coffee scales. But it has one glaring omission. Here’s my review of the Black Mirror scale from Timemore.

The market for coffee scales has been stagnant for a while.

It has either been a question of getting a simple digital scale with a timer or going all-in and investing in one of the pricy and extravagant smart scales from Acaia.

That’s not the case anymore. The Black Mirror from Timemore masterfully straddles the divide between these two extremes.

The TL;DR of this review is that I like what it brings to the table. Well, except for one glaring omission that might be a dealbreaker to you, depending on how familiar you are with the metric system. Read on for all the details. 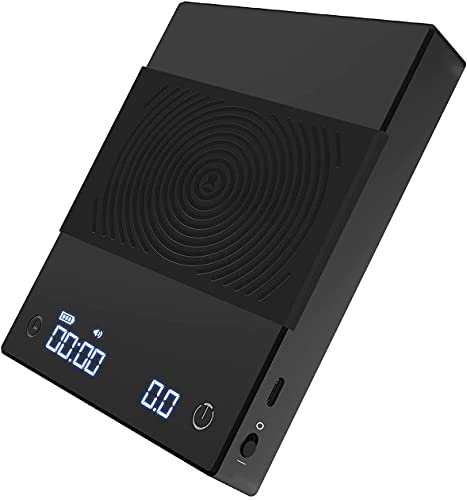 Timemore Black Mirror
It's minimalist yet highly functional. For most people this would be the ideal coffee scale.

Pro-Tip: Make sure to get the new 2022 version with the auto-timer and power-off-switch - use the button below

Timemore is a relatively new brand in the Western world, but actually, their history goes back to 2012, where it was — according to the sparse information on the company’s website — founded by a group of coffee-loving friends in China.

As with numerous products from that part of the world, the branding can sometimes feel a bit off. Maybe it’s culture? Maybe something is lost in translation?

Timemore’s slogan is ‘Enjoy slow living,’ and there is a product called the ‘Fish kettle.’

However, questionable marketing aside, I don’t think there’s any doubt that Timemore is a serious and dedicated coffee brand that brings some innovative and well-designed products to the market.

💡 Pro Tip: Timemore also recently launched an espresso scale called Black Mirror Nano – make sure to check out my review of that one!

The first thing people will notice about the Black Mirror scale is that it’s a beautiful thing.

The display panel is straightforward and easy to read. When it’s turned off, it becomes invisible, so the whole device is just a minimalist black square.

In spite of the name, there’s also a white model available.

The Black Mirror is big enough for manual brewing, while also being able to fit on the drip tray of many espresso machines due to its slimmer design.

The obvious comparison when it comes to design is, of course, the Acaia Pearl and Lunar models.

While I objectively think that those scales still have a slight edge in terms of pure design language and small details, the Black Mirror is not trailing far behind.

The Acaia scales rely on a design language heavily inspired by early-noughties Apple products like the plastic MacBooks and first generations of iPods.

The Chinese rival has a more futuristic design with sharp edges.

However, the Timemore scale seems less familiar, which is a good thing if you ask me. We have come to a point where it’s impossible to open Instagram without seeing carefully curated images of a nonchalant Pearl with a Chemex or Kalita Tsubame on top. At this point, it’s almost becoming a coffee cliche.

In terms of size, the Timemore gets another point in my book. It’s 5.98in x 5.1in x 1.02in, which means that it’s somewhere between the Pearl and Lunar.

This is good news because it means that you can probably get away with one affordable device. The Black Mirror is big enough for manual brewing, while also being able to fit on the drip tray of many espresso machines due to its slimmer design.

At the moment there are three small variations between the single sensor Timemore Black Mirror.

Most digital coffee scales are rather straightforward: they weigh coffee and also have a digital stopwatch.

However, if you look beyond the bare necessities, other features are nice to have:

Let’s see how it performs in each category. 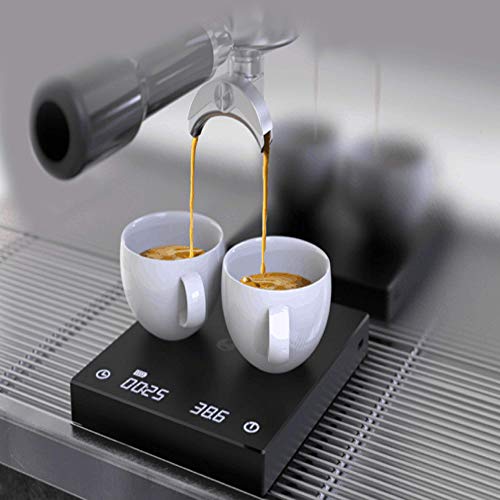 Does it have any smart features?

The Black Mirror Single Sensor is NOT a smart scale. It doesn’t have any nifty apps that you can connect it to.

Whether that’s a pro or cons, should be up to you. I generally don’t see the appeal of so-called ‘smart’ coffee products with Bluetooth connection.

However, the big brother of this device, the Dual Sensor version, does have an app. For that reason, you might see incorrect information online claiming that the Black Mirror is a smart scale.

As mentioned, there are two versions of the Black Mirror scale. In this review, I have only spoken about the Single Sensor version because that’s the one I have, and the one that I think will appeal to most people. However, I have also played around with the other version on several occasions (picture to the right)

On the surface, the Dual Sensor model is almost identical. However, it has a built-in drip holder with its own sensor.

This is useful knowledge if you want to calculate extraction yield, but for ordinary people, it’s not that relevant. The dual sensor scale works with an iOS app, however, at the moment you have to access it through WeChat, a Chinese social media, if you’re on Android. This is a major hassle unless you understand Chinese.

However, if you can see the appeal of having an excellent scale with a built-in stand, this is one of your only options.

Now to the not-so-good-stuff. If you are born in the Land of the Free, you might have a problem with this scale since it follows the metric system.

That means that there will be no ounces, only grams.

Personally, I find it puzzling that Timemore hasn’t added this feature since it must be one of the most straightforward things to do when making a scale.

That being said, the metric system is dominating the coffee community. It’s quite rare to encounter recipes that are not using grams, so this might be a brilliant occasion to get more familiar with the system.

Another downside of the scale is that it could respond slightly faster when touching the on-screen button. But I understand that this is the price you pay for having that minimalist panel without real touch buttons. It’s not even something major; 150 milliseconds faster, would have been nice.

Also, just to be clear – I’m not talking about lag when adding weight to the scale – it’s very responsive. I’m only talking about using the buttons when taring.

The Timemore Black Mirror scale fulfills the most important duties of a coffee scale, while also looking cool enough for your Instagram feed.

The size is just right if you ask me; it works for all kinds of manual brewing, but you’d also be able to fit it on most drip trays.

(Pro tip: If espresso is a priority, you should probably measure the dimensions of your particular machine, before buying).

The inclusion of USB C is welcome, especially at this point, where it’s the standard on most phones.

Overall, I think Black Mirror represents the best value on the market at the moment.