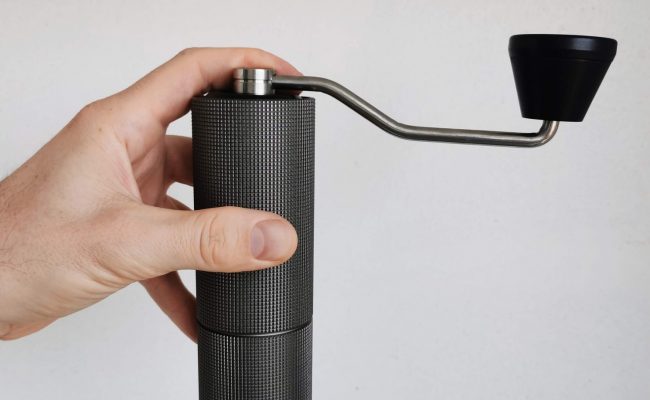 It cuts a few corners but the result is impressive. The Timemore Chestnut C2 is worth every penny and more.

Timemore has been living in the shadow of companies such as Comandante and Orphan Espresso until now.

But I’m pretty confident that the company’s time as an underdog in the world of hand grinders is about to end.

The company recently released the C2, which is an upgrade of its cheapest model. Even though it’s a budget grinder, it ticks many boxes.

I didn’t have massive expectations going into this review, but the C2 has won me over.

That doesn’t necessarily mean that this budget model is the right one for everybody. Read on, if you want to find out whether you should get the Timemore C2.

Where to buy?
Since this grinder is quite common in China you can find good deals on Aliexpress – the downside is that the shipping time can be anything from ten days to six weeks.

The model is available on Amazon at the moment, and shipping should be swift.

Prima Coffee from US also carries the model

I have also reviewed the brand’s beautiful Black Mirror scale and Slim Plus grinder.

I should mention that my posts about Timemore  are not sponsored and that I don’t have anything to do with the company. I have paid for the grinder myself.

Timemore is an intriguing brand. I can’t help but compare them to Xiaomi — the Chinese electronics company — who follows a similar “budget yet quality” philosophy.

Many of Timemore’s products have a distinctive look and feel, but there are also some weird glitches in their visual identity here and there. Sometimes they have funny translations and product names that are a bit off.

However, if you don’t mind these things, their products are (from what I have seen so far) excellent value for the money.

The Timemore C2 follows the general design template for manual grinders in 2020. It’s not trying to innovate too much, which is a good thing.

It has an anatomically shaped handle that spins smoothly due to being mounted on ball bearings, and on the inside, there’s a set of 38 mm steel burrs. By now, we have seen this design often, and it works perfectly fine for these pour over-centric home grinders.

The body’s material is aluminum, while the hand crank and burrs are made of stainless steel.

Weighing in just around a pound (467 g), this grinder is rather lightweight compared to many of its competitors. This is achieved by using plastic stabilizers on the inside and cutting down on unnecessary fat.

Being lightweight is a plus, but some people will see the plastic internals and thinner aluminum body as a drawback.

I’m not sure if the plastic is something you need to worry about – besides for aesthetic reasons. It seems well made and is not exposed to excessive force during regular operation.

Timemore C2 is a cheap grinder, so the company had to make a few compromises on the way – this being the most noticeable. Also, remember that the much more expensive Comandante has some plastic internally.

Plastic is also used for the lid cover and adjustment knob, but these places it doesn’t seem out of place in the same way.

The body itself is made of a dark grey aluminum that has a unique textured surface. I think it looks pretty good, and it’s not something I have seen other brands than Timemore use.

The idea behind the surface is that it gives some extra grip, but it doesn’t make much difference in daily life. However, the diameter and ergonomics of the C2 are already quite comfortable, so I never experienced issues with slipping while testing the grinder.

There are other color variations of the C2 available, but personally, I think they look a bit silly compared to the minimalist black version.

The first thing that surprised me when using the grinder was how fast it was. It’s very noticeable and something I wouldn’t have expected.

The burrs of the Timemore C2 are at a regular size at 38 mm, and many other grinders have burrs of a similar size.

I took the grinder apart to look at the burrs, and it appears that they have a different geometry that accounts for that aggressiveness. There’s a lot of bite to them. The inside of the grinder also helps – the feeding mechanism of the burrs works very well.

Even though the grinder is fast and aggressive, it’s still smooth to handle due to the smooth bearings and slim diameter. It’s easier to grip compared to more beefy grinders such as 1Zpresso Jx, Comandante, and Lido 3.

I have no qualms declaring that, together with 1Zpresso Jx, this is one of the fastest hand grinders on the market. Despite its more modest appearance, it’s a lot faster than Lido 3 and the Comandante.

The most pressing question regarding manual grinders is obviously how it performs when it comes to particle distribution.

Again, it does reasonably well and better than you’d expect for the price. It’s not quite at the upper echelon since it still produces a fair amount of fines. However, you can still make tasty coffee with it.

Compared to the 1Zpresso Jx, there was less clarity and distinction in the flavor notes. But this was something I noticed when doing a side by side comparison.

For this test, I used two Gabi Master A’s, which don’t allow any personalized technique. If you use the C2 daily, your brewing style will naturally become more attuned to the particular grind distribution, and you should be able to make brews that compare to more high-end grinders.

For instance, I brewed a few batches relying on the 4:6 method and had very acceptable drawdown times and silt-free brew beds, so don’t think fines will be a big problem.

In the range from Moka pot and Aeropress up to pour over and French press, it will work well.

In the manual, Timemore claims that it also has espresso settings, and while it technically can work, I wouldn’t use it for that. The range is quite narrow, so you’ll encounter problems when trying to dial in shots. Also, the burr’s geometry means that it doesn’t have much traction in the particular range, so it takes forever to grind a typical espresso dose.

I did it one time, and it took more than 3 minutes of frustrating grinding.

So far, we have been talking a lot about all the geeky details of the C2, but what makes it an exciting piece of kit is where it places itself in the market place.

Previously we have seen grinders that were either very cheap and relatively useless, or more expensive and capable.

The Timemore C2 changes all this. It’s not much more expensive than the Hario Skerton Pro and the Porlex Mini while running circles around them in most aspects.

If we go up to the next bracket of grinders, we have the models from 1Zpresso, which have a noticeable better build quality.

If you want something more premium feeling and/or espresso capable, I think the Jx and Jx Pro is where it’s at. Both those models should be able to last a decade at least, while I’m not sure that goes for the C2.

The Q-model from 1Zpresso has the benefit that it fits inside an Aeropress, which makes it suitable for travel. However, as a daily workhorse, I’d probably take the C2 due to the bigger capacity and increase in speed.

Timemore also has a few alternatives in-house: There’s the smaller “Nano”, meant for travel, and the popular Timemore Slim which, as the name indicates, is a slimmer, but more elongated version of C2. It’s more expensive, but it also uses more premium materials.

Overall, I think C2 places itself in a comfortable position. It’s the cheapest, serious grinder available, and the size is just about right for something you can use every day while still bringing with you on holiday.

I think this grinder will become very popular. It just ticks all the right boxes, while being the cheapest ‘premium’ option (if you can get somewhere close to the “local Chinese” price).

I like the size of the grinder, and think it will appeal to people with smaller hands as well. I love how fast it is. It’s frustrating to grind coffee in a caffeine-deprived state, so this is a significant plus.

If you’re considering getting a Hario or Porlex grinder, you seriously need to upgrade your budget a tiny bit and get this one instead.

However, if you want something suitable for espresso or you’re the kind of person who only wants the best of the best, there are still a few other grinders out there that are better.

→Check the price on Aliexpress or Amazon or Prima Coffee