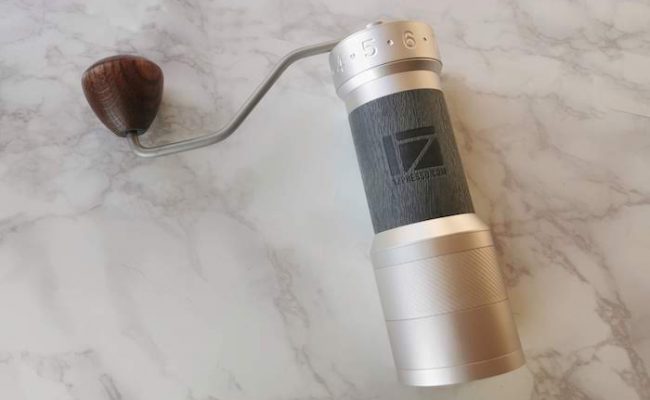 Review: 1Zpresso K Plus is an Engineer’s Dream

The K Plus is truly a flagship product. In this review, we take a close look at the new features of this hand grinder.

It’s not a secret that I’m a big fan of 1zpresso, especially their two grinders in the Jx-series.

So it’s always a little bit daunting to try a new product to see if it lives up to the expectations.

I have had the flagship model, the K Plus, for some months now, so I’m ready to share my opinion with you.

This grinder is an engineer’s dream. It’s the ultimate grinder in many ways, but in a few areas, it falls a bit short. In this review, I’ll tell you everything you need to know.

I should mention that 1Zpresso sent me a review unit, but this is not a sponsored post, and I will share both pros and cons in this post. 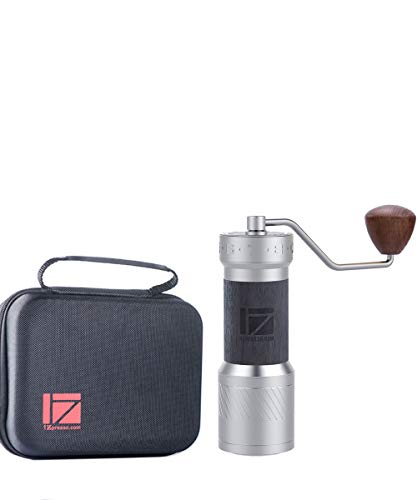 1Zpresso K Plus
The new flagship model from 1Zpresso is packed with features and new ideas. Top level performance in most areas.
See more reviews

The first thing we have to look at is the design. It’s a very well made grinder, and when you have it in hand, it feels extremely premium.

The most notable aspect is that it has this prominent ring with numbers on, where you can adjust it easily. You have a total of 90 clicks in one full turn, so this means that the grinder is precise and fast to adjust without having to count clicks.

In my opinion, the ergonomic design is super well made. Compared to the Jx grinders, it’s a bit slimmer around the center of the body, making it easier to hold in hand. If you have smaller hands, that’s excellent news.

The next thing that’s changed is that the handle is a bit longer than the Jx, and most other grinders, for that matter. A longer handle means more leverage, so it helps you crush the beans faster and with less effort. Again this is a plus for me.

Compared to many of the Jx grinders, the handle knob is also a bit more refined. It has this polished surface, which is pleasant to hold.

Overall, grinding is a real pleasure to use. The bearings are super smooth, just like with the Jx. Maybe it feels a bit more smooth.

Check out the video review here 👇

The catch jar is magnetic, so it comes off with a quick pull. It works well in daily life, and compared to screwing something on and off; it’s a nice workflow improvement.

It’s a winning feature, but it does mean that you need to keep your hand exactly in the middle of the body and not accidentally bump the grinder into your chest when using it. For me, that’s not a real difficulty, but some people might be in the habit of leaning their manual grinder against the body or holding it between the legs for additional leverage.

You can’t do that with the K Plus, but at the same time, you probably don’t need to. Unless you have small hands and a rather low grip strength, you should be able to operate it the way it’s intended. 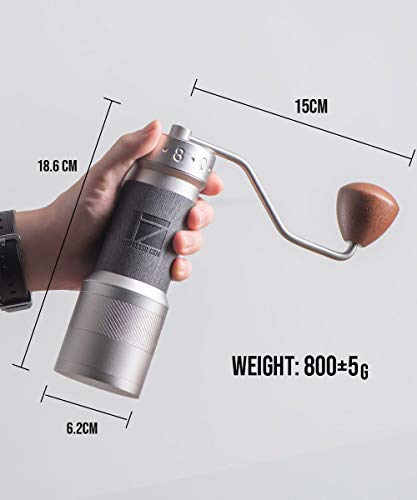 The catch jar comes with a neat feature I haven’t seen on other grinders. You can unscrew the bottom and insert a different base that’s made especially for espresso brewing.

Check out my video here for a more in-depth explanation.

It works splendidly and does a great job of breaking up any clumps.

There is also a slightly cheaper version of this grinder, it’s called the K Pro, which comes with a standard screw-on catch jar, but that model I’m less enthusiastic about.

The slimmer bottom and the heavy top means that the balance is inferior, so you’ll inevitably knock it over by accident. With the K Plus and the broader base, you don’t have the same issue.

I guess we also have to touch on aesthetics. How does it look?

In my opinion, it’s a good-looking grinder, although I probably prefer the models in the Jx-series just from a purely superficial point of view. The branding is a bit more subtle, and the overall look is a bit more minimalist, on those models.

The K Plus looks and feels premium, but the big logo and the slightly cheaper material of the grip band on the body could be more pleasing. I rarely have problems holding a grinder, so I wouldn’t mind if it were naked aluminum. Then a rubber sleeve or band could be optional.

Okay, but on to the more important thing: how does it grind?

This model is made to grind for all brewing methods out there. So French press, drip, AeroPress, espresso, Turkish, you name it.

It’s straightforward to go back and forth between the settings. I can’t stress how awesome this is. The adjustment is so much better compared to other manual grinders.

In my testing period, I have mainly been using the grinder for pour-over and AeroPress, and it has been working beautifully for both of these purposes.

It grinds very fast, about the same speed as the Jx Pro, so that will be 25 grams in 35 seconds. This is a lot faster than most other hand grinders.

The cups have been tasty – I would say that they taste different from the Jx grinders, which is to be expected since the burrs have a bit of a different geometry.

The Jx grinders have burrs that are quite similar to the Italmill burrs inside the Kinu M47, whereas the K Plus has burrs that look a bit more like the famous nitro blades of the Comandante C40.

I did use a Kruve sifter to try and determine K Plus’ performance against the Jx Pro.

But much to my surprise, the two grinders have an almost identical distribution. Of course, a sifting test doesn’t show the full picture, but the models are very similar when it comes to fines and boulders.

There might be something to suggest that K Plus has a slightly more narrow peak, but it’s not enormous.

In general, the data you get from sifting is something to be a bit cautious about. For instance, if I make the grind size a bit coarser on one of the grinders, I’ll change the distribution and have fewer fines, but suddenly I get more boulders.

So to compare two grinders, you need to be sure that all parameters are identical.

⚠️Pro tip: I would not make any buying decisions based on random sifting tests. Especially not when it comes to small changes down to a few percentage points.

I have seen some people on online forums read way too much into sifting tests and go out of their way to get a grinder that produces 12% fines instead of 14%.  I think variability in bean brittleness, humidity, shaking technique, measuring method, etc., is much more likely to influence the test than people realize.

The fascinating thing is that even though Jx and K Plus perform similarly, I find a clear difference in taste between the two.

Again, that shows that grinding is more complicated than just making sure that the distribution is narrow.

In terms of flavor, the Jx has more sweetness and roundedness, while the cups are more crisp and bright with K plus. I find it hard to say that one tastes better than the other or has a better or more uniform ground distribution. I think they both have a kind of signature flavor, and some people might like one thing or the other.

For some extra comparison, I also included the Wilfa Uniform with SSP burrs, and with that one, there was no doubt that it had a more narrow distribution since it had both fewer boulders and fines. But again, I wouldn’t say that I outright prefer coffee from that grinder.

K Plus for Espresso

This grinder is advertised as an all-purpose grinder, and it’s certainly easy to go from drip to espresso with that efficient, nice adjustment wheel.

My results for espresso were a bit mixed. I pulled some lighter roasts on the Flair, and they were quite good. You don’t have to be ultra-precise with a lever machine when dialing in because you can adjust the pressure as you go along.

So I would experience a difference of around 8 seconds in shot time for each click. It’s still possible to dial in the grinder and get the right timing for what you want, but it means that you should adjust timing by dose instead of clicks once you find the right setting.

I also pulled several shots with the Jx Pro next to the K Plus, and they have a quite different flavor profile, with the K plus closer to the acidic, fruity spectrum and the Jx with more sweetness and body.

I must say that I’m a bit more old school when it comes to espresso, so I generally like more mellow and round flavors in the cup. With the Jx Pro you also have some additional steps, so it will be easier to dial in shots.

To give you some perspective, I prefer the flavor profile of the flat burr Eureka Mignon to both of these grinders.

Overall, it does work okay for espresso. I could grind a dose of 18 grams medium roast in 45 seconds, and for a darker blend, it took around a minute for 18 grams.

Like all 1Zpresso grinders, the K Plus has a unique design, where you can take it apart without tools.

Even though K Plus is quite advanced, you shouldn’t be scared away. For a quick clean, it’s straightforward to remove the outer and inner burr.

Reassembly (and calibration) is relatively easy once you have wrapped your head around it.

However, it’s important that you do it carefully – don’t tighten the top ring too forcefully before you are sure that you have the adjustment ring located with the red dot and the zero position in the right place.

Otherwise, you risk locking the grinder, and it can be tough to open up again. I’m talking from personal experience here, so do be a bit careful!

The instructions from 1Zpresso about the calibration are a bit unclear, so I’d suggest you check out this video on YouTube for a more straightforward explanation.

I think 1zpresso, in many ways, has followed up the Jx with an even better product.

The technological advancements on the K Plus are quite remarkable: It truly is an engineer’s dream.

However, recommending the K Plus over the Jx and Jx Pro is more complicated, since the cup quality is similar. What you’re getting with the more expensive grinder are some nice-to-have features, but you also get to pay for them.

The Jx Pro comes in at a lower price point, and with that one, you also get a more precise adjustment and slightly better flavor profile for espresso.

When you have the two grinders next to each other, there’s no doubt that K Plus feels like a more sophisticated and premium product. However, it’s also placed at a price point where it’s a lot harder to say that it’s an absolute steal for the money, the same way you can do with both the Jx models.

If you have the money and appreciate the K Plus’s extra features, it’s worth getting.

If you’re more budget-conscious or firmly in the espresso camp, I think the Jx Pro is still the better option.