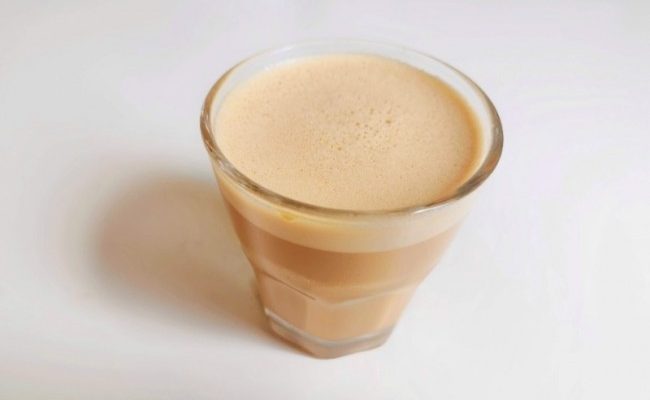 Butter and Coconut Oil in Coffee: Is it Bulletproof or BS?

Butter in coffee is a recent trend that sounds awful, but it actually works out well in real life.

Most people react with both curiosity and disgust when they hear the two words butter and coffee uttered in the same phrase for the first time.

Milk is normal. Sugar is understandable. Heck, even a dash of cocoa powder wouldn’t raise any eyebrows.

Butter and coconut oil in coffee, however… at this point, things start to get a bit weird.

However, there is a logical explanation for all the madness.

Personally, I adore so-called “butter coffee” now and then.

If you want to know how you can get in on this exciting trend without sacrificing proper coffee flavor (and your soul), then read on.

It’s been common practice to add dairy to coffee for hundreds of years. Today, we mostly use milk but back in the old school European coffee houses more than a century ago it was pretty standard to add a dash of cream to get that extra rich and round flavor.

Essentially, cream is concentrated milk. And butter is just cream that has been churned. So the step from milk to butter isn’t that dramatic when you think about it.

However, the addition of butter to black coffee wasn’t widespread until entrepreneur Dave Asprey came along and shared his recipe on his website in 2009. He called this concoction “Bulletproof coffee” since it was supposed to make you feel that way. Asprey got the inspiration from the people of Tibet who view yak butter tea as the healthiest thing you could possibly ingest.

Why put butter in coffee?

In recent years dietary movements such as paleo and LCHF have preached that fat is actually beneficial to add to your diet if you want to feel good and look fit.

David Asprey has taken this to an extreme with the addition of butter and a derivative of coconut oil called MCT to his morning coffee.

According to him, this combo of caffeine and fat is way better than eating breakfast. It also increases mental clarity and promotes weight loss, claims the inventor.

Many first-movers and health fanatics ended it up giving it a try and found out that the wonder beverage delivered on many of its promises.

However, David Asprey got some backlash in the paleo community for trying to trademark and copyright a rather simple coffee drink.

Mr. Asprey launched his own line of coffee beans and MCT oil that was somehow more ‘bulletproof’ than anything else out there. Notably, his claim that his coffee beans are more healthy than regular brands was met with skepticism.

Because of this controversy many people have started to call the concoction “butter coffee” instead of using the bulletproof name which can be seen as endorsing Mr. Asprey’s products.

What is butter coffee?

So if you were to ask me ‘What is butter coffee’? I would say that it’s similar to the abovementioned bulletproof coffee – just without all the marketing and hype.

MCT stands for medium chain triglyceride; basically, It’s the medium-long fatty acids from coconut oil. They have the benefits of being liquid and flavorless, and some people claim that they are the most healthy parts of the coconut oil. However, MCT also tends to be more expensive than old coconut oil so you might want to try both and find out what works best for you.

I have been drinking butter coffee on and off since I tried it for the first time back in 2013. Back then I was eating breakfast as most people do so it took a few days to get used to replacing the first meal with coffee and fats.

However, after getting used to it, I enjoyed the sensation that the butter coffee gave me. One of the ideas behind the drink is that it provides increased mental clarity, and I could feel that in my daily work life. I had more concentration and fewer food cravings. If this was due to a slower release of the caffeine or because of the fats, I can only speculate.

I also found that the drink helped me to adhere closer to a low carb lifestyle. After drinking the butter coffee with MCT oils for four months and trying to avoid starches, I was back to my lowest weight since high school.

As a coffee geek, there was a downside, however. One of the real pleasures in life is to experience all the flavors a bean has to offer; when you add butter and coconut oil to your mug that’s not going to happen.

I thought that the bulletproof coffee was tasting great, but it was more like having a latte or cappuccino and less like drinking the kind of specialty coffee that I adore. I’d usually drink one cup with butter and then two without, to still be able to enjoy my black coffee.

Also, coffee with butter is similar to milk-based coffee drinks: In general, you should use a slightly darker roast than you would otherwise. The creaminess of the butter lends itself very well to anything from full city to Italian roast. However, don’t go lighter than that.

Today, I usually fast in the morning instead of drinking bulletproof coffee, because it’s easier and offers many similar benefits.

Once in a while, however, if I have an intense schedule ahead of me, I’ll get the blender out and make myself a delicious and rich butter coffee that will keep me going for hours with sustained energy.

What is a bulletproof coffee?

Dave Asprey shared his recipe on his website in 2009. He called this concoction “Bulletproof coffee” since it was supposed to make you feel that way. Asprey got the inspiration from the people of Tibet who view yak butter tea as the healthiest thing you could possibly ingest.

Can you put coconut oil in coffee?

A few people like to blend the oil with coffee in a blender to make a delectable tropical-style drink. Eventually, you can stir your way up to 2 tablespoons (28 grams) of coconut oil in the event that you might want to increase your fat intake. Rundown Start by including 1 tablespoon (14 grams) of coconut oil to your hot espresso.

What does butter in your coffee do?

Butter coffee is believed to give consistent, long-lasting energy without a glucose crash. In principle, since fat eases digestion, the caffeine in the coffee is ingested slower and provides longer-lasting energy.