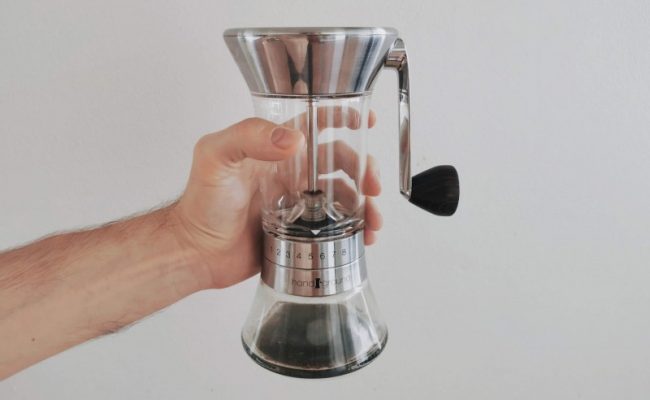 The Handground Precision Grinder is an intriguing idea that fails big time. Find out, why I don’t like this grinder the least.

(Update October 2020: Handground has released a slightly upgraded version of this model – this review is based on the first model)

As a society, we need innovation. Sometimes someone brave has to come along and turn everything upside down. When that happens, the consumers win. This is called radical innovation.

However, when attempts at creating something brand new go wrong, they tend to go terribly wrong.

The Handground falls into this category. It is a bumblebee that can’t fly.

The tl:dr of this review is that I’d encourage you to skip this product altogether.

If you want to find out exactly what’s wrong, then stick around and read the full review. 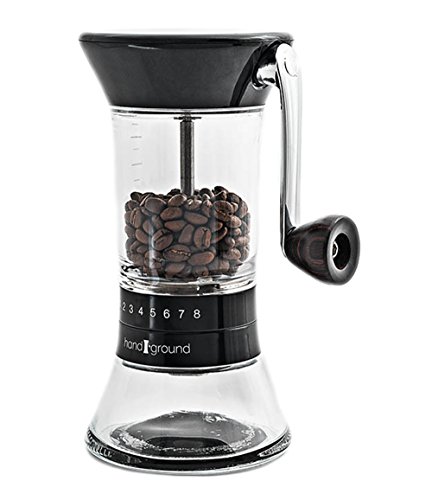 Handground Coffee Grinder
The Handground Grinder suffers from a flawed design and cheap materials. It fails to do even basic things well. It's difficult to recommend this product.
See more reviews

Handground started out on Kickstarter in 2015. The campaign was fully funded within one day and managed to raise more than $300.000.

Back then, we didn’t have as many premium manual grinders as we do today, so there was a huge demand for something new and exciting.

Handground promised precisely that with their seemingly innovative side-mounted handle.

The company emphasizes the community-aspect of the grinder. Not only is it funded by the backers, but their feedback has also been used during the design phase.

This is pretty sympathetic, but I can’t help wondering if this isn’t a case of ‘too many cooks spoiling the soup.’

The first thing that strikes you about the Handground is the size. It’s actually rather big in real life. It’s chubby across the waist, which makes it awkward to hold the natural way.

The weight is also substantial. At 800 grams/28 oz, it’s comparable to many of the big boys, such as 1Zpresso Jx Pro.

The most striking element is, of course, the forward motion handle, which separates it from most other grinders out there. The idea is that it’s easier to generate power pressing forward compared to spinning the handle horizontally. 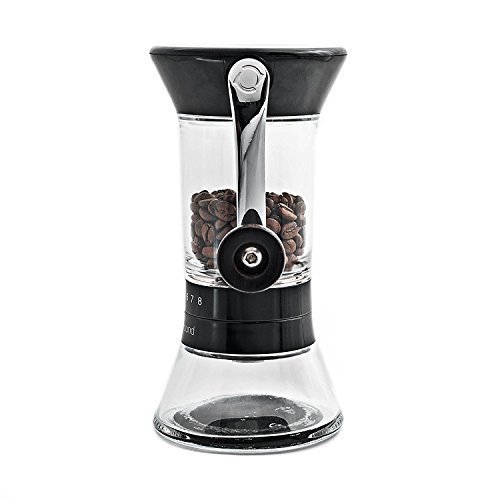 My first impression of the grinder was that it was looking solid, but the more I handled it, I started to worry about all the plastic parts and weaker points. The gearbox with the handle connected doesn’t seem sturdy. When grinding, especially light roasted beans, you need a lot of force.

The grounds bin is made of thicker glass. It has a nice shape and a rather wide bottom, which means that you don’t have to worry about knocking it over. It probably wouldn’t survive a drop to the floor, though.

When the hopper and the bin are disassembled, the hopper can’t stand on its own due to the lower burr protruding. It might be a small thing, but this kind of annoys me.

Overall, the design makes a lot more sense on the drawing board than in real life.

It’s big, clumsy, and many parts seem fragile. The last suspicion is confirmed when looking at recent user reviews on Amazon and the Kickstarter campaign page. Several consumers complain about a broken gear box, or loosing the little bolt that connects the handle to the body.

One of the main claims in Handgrounds Kickstarter campaign is the consistency of the grind. Apparently, the company has developed its own ceramic burrs, which should be more efficient compared to the ones we’ve seen in the grinders from Porlex and Hario.

I’m not against ceramic burrs per se, but overall they are dull and less consistent compared to the steel burrs we see in the vast majority of premium grinders.

This is also the case with the burrs in the Handground. The burrs aren’t very sharp, which means that you have to put a lot of effort into the grinding.

I was able to brew some decent cups of coffee from both pour over and Aeropress, but it definitely lacked the clarity that premium hand grinders normally offer. Was it better than a Hario or Porlex? It was probably on par, but I couldn’t say that it was better.

The adjustment of the Handground is appealing on the surface. You have eight (8) numbers, each with an additional half step in between, effectively giving you 16 steps.

However, most of these steps are way too coarse to be usable. At step 4, we’re already close to something I’d call an ultra coarse French press. Steps 1-2 are the only ones used for pour-over, which is pretty disappointing.

The company claims that this grinder can reach espresso-fineness, but I don’t see how that could happen.

What’s even more disappointing is that there are still many boulders and fines at steps 1 & 2. The grind isn’t particularly consistent. In fact, I don’t see that it’s an improvement over the cheapest tier of manual grinders.

The first major problem you’ll encounter when using the Handground grinder is to find out whether you want to:

When using darker roasts, it is possible to put the Handground on the table and use it like it’s intended.

But when you’re grinding a bean that’s light roast (and thus less brittle), it becomes a struggle of epic proportions.

It turns out that pressing down on top of a grinder with one hand, while turning the handle with the other, is HARD work.

It feels like the team behind the Handground were so enamored with the idea of the side-mounted crank that they invented a new problem on the way.

Sidenote: It’s not a bad idea with the forward-motion handle per se, but here the execution fails.

For instance, the Rok Espresso grinder relies on a similar principle, but because of the much longer handle and the broader and heavier base, it’s rather easy to apply force.

Hand grinding will always be a bit of work, but with this particular design, it just feels like too much. I’d much prefer the ergonomics of the Porlex Mini or even something a bit more clunky such as the Hario Skerton Pro over this.

Another thing I disliked in a daily use scenario was how the hopper would have to lie on the side when separated from the grounds bin due to the lack of plain bottom.

Also, I’m not sure what you need such a big hopper for. The company claims that it has a 100 grams capacity, but who grinds that much coffee manually? I think the most common dose among hand grinding fanatics is probably somewhere between 15 to 33 grams.

As you might have guessed by now, I’m not fond of the Handground. So what are some alternatives in the same price range? When this model launched originally, it was priced as a mid-level hand grinder. In that price range, there are several better options today.

The Handground grinder is a good idea on paper but a terrible one in reality. You can sense that the people behind the company have pure intentions and some fresh ideas when it comes to user involvement, promotion, and marketing, but don’t have the experience when it comes to engineering and production.

Unfortunately, that is a huge downside to the whole crowdfunding idea. It’s easy to dream big (and sell that dream), but it’s actually pretty hard to create a unique product that will make people’s life easier.

There’s a good reason that most hand grinders are variations on the same theme; it’s because it works pretty well.

However, once the Kickstarter Campaign is set in motion, you can’t just stop and give it all up. You have to deliver. Even if it means your product isn’t ready for the market yet.

In my opinion, this is what has happened here.