The Bodum Bistro has its ups and downs. Find out, whether you should get it.

Bodum is more or less synonymous with French presses.

However, the Danish company actually produces a bunch of different coffee products.

In this review, we’ll take a very thorough look at the company’s flagship grinder, the Bistro.

Read on, if you want to know whether you should get it.

The build quality of the Bodum Bistro is decent, even though the grinder feels pretty light when holding it in the hand.

I would say that the grinder looks a bit more like a design-product compared to other budget-friendly models. However, some people would probably prefer something a bit more minimalist or utilitarian.

Not messy at all

The borosilicate glass catch jar is the highlight of the grinder. This appears to be the same material as the glass used for Bodum’s French presses.

Of course glass is a lot more fragile than plastic, which is something to keep in mind if you’re clumsy.

However, I don’t think I have seen any other grinders that are at this level when it comes to reducing static and creating a mess-free experience. This is incredibly nice in daily use.

If a mess-free experience is one of your priorities then the Bodum Bistro should 100% be on your radar.

The Bodum Bistro is pretty easy to use. It’s the same simple design that you see on most entry-level conical burr grinders: You just rotate the hopper to adjust the grind size.

There’s also an adjustable timer, which is nice enough whether you’re single dosing or filling the hopper.

As mentioned before, there’s no mess with this grinder. Due to the combination of a tight-fitting rubber lid and glass catch jar, all grounds land exactly where you want them, and there will only be minimal static – even without using the Ross Droplet Technique.

I did notice around 1-1,5 grams retention/exchange with every use. If you’re sensitive to this, you can give the device a little knock on the side while it’s grinding out the last couple of beans. That will get most of the grounds out of the chute.

Depending on where you live the Bodum Bistro can either be budget-friendly or surprisingly expensive.

With that in mind it can be a bit tricky to review this grinder.

This model obviously does not grind with the same level of uniformity like better hand grinders such as Timemore Slim or 1Zpresso Jx, but it is relatively consistent as compared to other entry-level electric grinders (which is not really saying a whole lot).

In my testing the grounds have been relatively uniform at the finer range.

This is quite typical for entry level grinders. However, when going coarser (a bit above the “pour over” setting on the adjustment dial) the consistency rapidly deteriorates. Many big chunks, also known as boulders, are present at coarser grind settings.

Also, there not a huge range to navigate between “fine” and “too coarse”, which is disappointing. It’s as if you’re going from “fine” to big chunks in no time. Personally, I like to brew pour over at the 800-900 micron range, and this sweet spot is rather challenging to find with the Bistro.

I was surprised by the poour quality of coarse grounds, since Bodum is famous for its French presses.

One would have thought that their grinders would be good precisely for coarse grounds.

As you can see from the picture above the coarse setting is quite inconsistent. Brewing with this grind size will result in some particles being extremely underextracted.

Bodum claims that the grinder can grind fine enough for espresso, but obviously it’s not ideal for this brewing method. Yes, you can probably use it with a pressurized portafilter but that’s it. This isn’t an espresso grinder.

At the pour over range (as shown on the adjustment ring), the grounds look pretty consistent at first, but after brewing you realize that there are lot of “fines” aka dusty particles in the grind.

Of course, this affects the flavor which is a bit harsh, while lacking significant sweetness. With immersion brewing such as French press and Aeropress this is less apparent, but it becomes clear when brewing pour over coffee.

You’ll often be forced to brew on the coarser side when making drip coffee, since fines tend to create harsh flavors. I have been getting around this problem by brewing at a coarse setting with a stronger brew ratio.

In Consumer Reports big grinder comparison, the Bodum Bistro is currently the top ranking model. It even beats a model such as the Baratza Encore, which has been praised as the golden standard for ages.  In the comparison, the Bistro is specifically singled out as a grinder, which excels when it comes to grinding coarse, which is a bit of a surprise to me, given the results in my testing.

The Bodum Bistro is not a bad grinder. The design is interesting and I guess some people will like it enough to choose the grinder over for example the Baratza Encore.

You can make decent enough coffee with the grinder as well. It will require a bit of experimentation with grind size and brew ratio, however.

Overall, regular coffee drinkers (people who add milk and sugar and enjoy medium to darks roasts) will probably be pretty satisfied with the flavor. However, real coffee snobs who buy specialty coffee with interesting flavor notes will not be entirely happy with this grinder.

At finer settings you will get some harshness in the cup, and muddled flavors, making it difficult to discern particular flavor notes.

At coarser settings you battle with underextraction due to the high proportion of boulders, and as a result you will have to brew at ratio such as 1:14 to compensate for the unevenness.

In my opinion, you’d be better off with a Baratza Encore, which does offer a bit more flavor clarity.

However, if you value cleanliness and a lack of static above everything else, this grinder is fantastic. 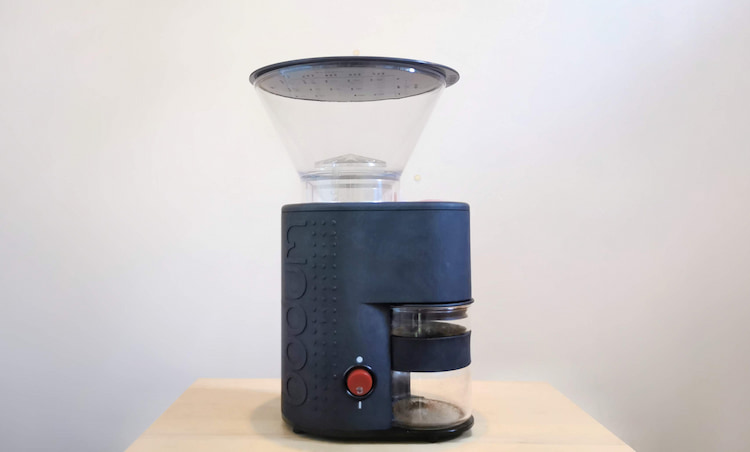