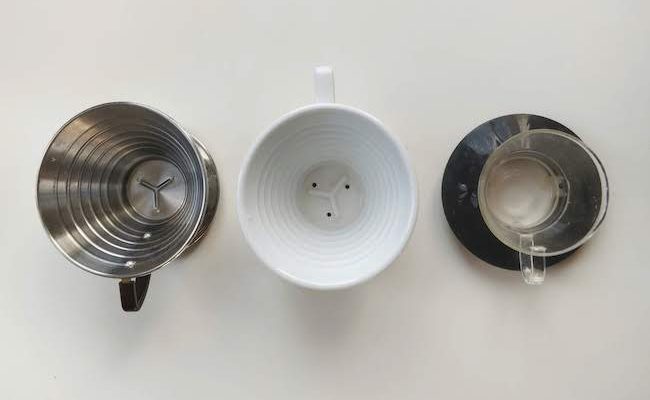 The Kalita Experiment: Are all Waves Making the Same Splash?

The Kalita Wave is a popular pour over dripper. However, it turns out that there is a huge difference between the models in the line-up.

In specialty coffee, we admire consistency and almost scientific accuracy. Stuff like this is often heard among the most hardcore geeks:

The extraction yield should be ‘X,’ and total brew time ‘Y.’

However, often we fail to question some of the most basic assumptions.

Recently, I have been experimenting more with the Kalita Wave. I have had the small glass version for a few years and always liked it even though I was more into the Hario V60.

Since I wanted to brew larger batches, I got myself the iconic stainless steel Kalita Wave 185.

However, I experienced something quite odd: The steel version seemed to percolate a lot slower and more unpredictable than my usual glass model.

Check out the video below, where I show how you can “mod” the stainless steel version of the Kalita Wave ⬇️

Puzzled, I conducted a simple experiment to see whether there was any actual difference between the two.

I was quite astounded: The small glass version drained 83 percent faster than the metal version.

I then got my hands on the 185 Wave in ceramic and did the same experiment. Once, again I was surprised; this brewer also acted differently, however not quite as dramatically.

By now I was convinced that all Kalita Waves had their own personality and flow rate. The only thing they seemingly had in common was the name.

I reached out to some of my good coffee buddies on Instagram (thank you, guys!) and asked them to perform the same experiment with their versions of the Kalita Wave.

More water pouring ensued, and eventually they got back to me with additional data to confirm my hypothesis: Not all Waves are the same!

Check out the infographic below to see the results of the experiment!

The above measurements don’t say anything about which model is brewing better coffee. All it is saying is that the Kalita Waves are somewhat different.

Notably, the stainless steel model is an outlier. It’s almost double as slow compared to the Glass 185 Wave.

A skilled barista would probably be able to overcome these differences by adjusting grind size and pour speed; however, it’s problematic when Kalita Wave recipes are shared as if there’s only a standard model.

The skeptical reader might say that pouring water into an empty cone doesn’t prove anything, so to counter that argument I did the same experiment with a pre-wet filter in the dripper. Again, the results were starkly different.

My personal experience brewing with these different models aligned nicely with the test results. The stainless steel version is a lot slower than its siblings.

In addition, both I and other homebrewers have noticed that it tends to have clogging issues. This happens when the combined weight of water plus saturated coffee grounds pull the paper filter down so it covers one or more of the drain holes. This is especially prone to happen if you follow a multi-stage pouring recipe (i.e. more than 2-3 pours).

I questioned my coffee geek friends about this, and the general opinion was that both the stainless steel version as well as the Tsubame version had this issue, while the glass and ceramic ones were unlikely to get clogged.

If we look at the inside of the brewer and the placement of the drain holes, the reasons for potential clogging becomes more obvious:

Sidenote: It seems there are two different models circulating of the Kalita Wave stainless steel: One with more protruding ribs and slightly faster flow, as well as the more widespread one featured in this article.

If you’re interested in brewing with a Kalita Wave, I’d suggest going for one that drains rather fast and doesn’t have the clogging issue.

That leaves us with ceramic and glass options. However, the glass version is rather fragile, so if you’re the least bit clumsy, I would avoid that model.

Leading up to this experiment, I bought the bigger glass version but broke it after only two days of use.

The 155 glass version should be more sturdy since its plastic cap protects it better and it has a better weight distribution. On both versions, the plastic caps are of identical size. However, the 185 is much larger so technically it’s a lot more exposed. To back up my point, I’ll add that I have had the 155 glass version for about 2,5 years, without any accidents so far (knock on wood).

The ceramic version will be susceptible to breaking if you drop it from a distance, but most like it will be fine for daily use. It has some heft, so you’re not likely to push it over by accident.

With all these considerations, I think the ceramic Kalita Wave offers the best combination of usability and longevity. The only downside is the weight; at 317/365 grams (11-13 oz), it’s not exactly ideal for travel.

I have recently experimented with “modding” the stainless steel Kalita Wave.

There are two small hacks that will improve the performance of this model.

The easiest one is to use the steel dispersion screen from the Flair Espresso Pro 2 in the bottom of the dripper. This will help to prevent any clogging or stalling. However, the downside is that you have to pay attention to an extra moving part. And if you don’t already have the dispersion screen, you will have to spend $12.

The second hack is to enlarge the drain holes on the dripper. If you have a drill at home and a cobalt drill bit that is around 4 mm, this is a relatively easy hack to perform.

You can check out the video on my YouTube channel to learn more about this little trick.

I took the Kalita from a drain time of 55 seconds to 29 seconds by making the holes sligthly larger. This hack will not eradicate the problem where the filter will cling to one or more drain holes, however, it will improve the performance and make the steel version more similar to the other Kalita models in terms of flow rate.

Curious about how I brew the Kalita? Check out this video:

Update 25th August 2019: Kalita has recently released a sandstone version named ‘Sagan’. The dripper is made in collaboration with the craftsmen from the Hasami town, who also created the ceramic dripper. It performs similarly to the ceramic version and has many of the same pros & cons.