Finally the new espresso scale from Timemore is here. Can it live up to its famous sibling?

Timemore already has one of the most popular coffee scales on the market.

Now they are back with a new model aimed at espresso geeks.

In some ways, the Black Mirror Nano looks like a tiny replica of the original; however, there are some minor differences that you need to be aware of.

In this review, we’ll take a close look at the pros and cons of this miniature scale. 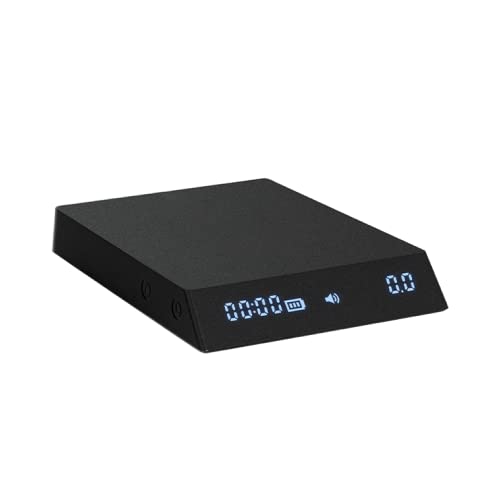 78 Reviews
Timemore Black Mirror Nano
The UX can be a bit cumbersome at times, but overall it's still an excellent espresso scale.
See more reviews

Timemore is a relatively new brand in the Western world, but the Chinese company has quickly made a name for itself.

Most famous is probably the brand’s series of grinders. I have previously reviewed the C2 and Slim Plus models, and both are them offer great value for the money.

I don’t think there’s any doubt that Timemore is a serious and dedicated coffee brand that brings some innovative and well-designed products to the market, which the new Nano-scale also seems to indicate.

Some people claim that the Chinese might take over the whole world one day, and at least in the coffee-sphere, that seems less frightening now that we have a brand like Timemore.

By the way, I should mention that I have no affiliation with Timemore and have bought all of their products for my own money.

I was a big fan of the original Timemore Black Mirror scale. It had the right features and the right price point.

The Black Mirror Nano is more expensive, and for that reason, expectations should also be higher.

At first glance, it seems as if the materials used are of better quality. The old model was primarily plastic, but the Nano also uses some metal.

The new scale is focused on espresso, so it’s quite a bit smaller at 10 x 11.5 x 2 centimeters. This compact size makes it a better fit on the drip tray. Weighing in at only 230 g, it’s also very suitable for travel.

The original Black Mirror can technically fit some drip trays, but many machines will be too small to accommodate it.

Besides having been shrunk down in size, the apparent difference is that we have an angled display.

This is a stroke of genius from Timemore and something I haven’t seen on other devices.

The benefit is twofold:

Another significant difference between old and new is that the buttons are now placed on the side of the scale. Again, this is both good and bad: Good because it lets you use the whole surface of the scale for something big like a carafe, but there are also significant downsides.

The type of buttons that Timemore uses are not like “real” buttons that will give you some tactile feedback (like a click); instead, they are of the new and more modern touch style.

This design decision means that you don’t get tactile feedback when pressing them. Having buttons of that type on the side feels slightly unnatural. It’s a small scale with tiny buttons, so sometimes you’re fumbling to find the right spot to press.

When I first got the scale, I had the sound disabled, which turned out to be a frustrating user experience.

After I turned the sound back on, it did help a lot. A beep gives you some reassurance that you’re touching the right area.

However, having the sound on when using a scale is not my preference. I have always had it disabled on the original Black Mirror.

So this is a compromise that you’ll probably have to live with when using the Nano-model. Unfortunately, without sound on, the UX isn’t that pleasing.

The side-facing buttons could also be an issue in other instances. For example, it is very awkward to use the scale with a device like the Flair 58 because the rubber drip tray will almost hug the scale.

The scale has three different modes, so let’s talk a bit about what each of them entails:

I have been using the scale for several months now, so I feel like I have a pretty good idea of the pros and cons.

In daily use, it feels accurate and snappy. As a basic coffee scale, I have no issues with it.

It uses USB-C charging, and the battery life is excellent.

I have also brought it with me on a trip, where I was mostly brewing AeroPress and Tricolate, and it worked very well as a travel scale due to its compact size.

I only wish that Timemore had included a little plastic box for it. Scales are precision instruments, and you don’t want them to get squeezed in your luggage, so this would have been reassuring.

I think it does pretty well when it comes to regular coffee and pour over. However, I’m not using the “pour over mode” since I don’t think the auto-timer is easier or more precise than just pressing the button. The few seconds it takes to start the timer until you begin pouring don’t make any difference in real life. Yes, with espresso, seconds matter. However, it is trivial whether it takes 180 or 184 seconds to brew a V60.

Since you have to start the auto-timer and wait for a countdown from 3 when using the “pour over mode,” you don’t actually save any time or effort by using it, so I don’t see the purpose.

The tech is also a bit more advanced when talking about the “espresso mode” on this scale.

The auto-tare function is quite lovely. When you’re about to line up a shot, there can be a bit of tweaking to position the scale and cup in the right spot under the spout of the portafilter, and then it’s convenient that the scale automatically tares.

The auto-timer also works reasonably well. It’s based on some algorithm that assumes that there will be a very slow drip at the beginning and a steady inclining flow rate. If the shot runs too fast or inconsistent, the scale will be confused. That can be a problem if pulling a very fast allongé. However, in daily life, it works pretty well.

When you stop the shot, the auto-timer will detect it rapidly and finish the time tracking. Then the display will flash six times to indicate the final shot time and weight before zeroing out. It would have been convenient if the data had been displayed for a bit longer. Yes, it is possible to make a mental note about time and yield during the six flashes, but why not keep it there a bit longer?

You have to tap the timer button rapidly 5 times to switch between modes. At first, it seems a little bit fiddly, but it works consistently enough.

As I mentioned, I don’t use the pour over mode at all, so it’s a little bit annoying to skip through it every time. Again, the software and UX is not amazing here, but it gets the job done.

There’s also a flowrate measurement tool. Again, this is something that I don’t find very useful. I guess Timemore has looked to Acaia, whose scales have it, but honestly, it’s not something I see as helpful.

Maybe it would be useful if the scale had Bluetooth connectivity and an app that could show me a graph of the brew.

But as a real-time measurement, it’s not that useful. Mainly because it’s not an interesting metric, but also because you have to choose between the timer and the flow rate – the display can only show one thing at the time. It’s possible to switch between the two display modes while brewing – the scale will keep the timing intact, but why would you?

Maybe if you’re a barista prodigy training for the World Brewer’s Cup? Other than that I can’t find any compelling reasons.

There’s a separate button for flow rate, and I wouldn’t mind if that button had instead been used for switching between espresso mode and “regular”.

I had very high expectations when I purchased Timemore’s new Nano scale. However, the honeymoon phase was soon over, and afterwards I was left in a more complicated relationship with my new gadget.

It’s still an incredibly slick-looking product that accurately weighs and times your brews. As advertised, it’s excellent for espresso and quite capable for pour over as well.

However, if we’re just talking about regular brewing, I would probably just pick the cheaper and larger Black Mirror (which incidentally has just been relesed in an slightly modified version).

The Nano is a slightly frustrating experience with its side-facing buttons. It’s a solid idea, but at the moment, the execution is not quite ideal.

Also, the functionality is bit bloated. The “pour over mode,” and flow rate function are superfluous add-ons, if you ask me.

However, at the moment of writing, Timemore Black Mirror Nano has one main rival: the Acaia Lunar. By being a lot more affordable than the Lunar, while still retaining that premium flagship aesthetic, many coffee lovers are probably still going to be interested.

The Black Mirror has flaws, but overall it ticks many of the right boxes.

That alone should be enough to make it yet another success for Timemore.