Is the brand new ‘Aeropress Go’ as good as the original? In this post I’ll take an in-depth look at this fascinating new brewer.

One of the most successful coffee products of this millennium has been the Aeropress.

Now, around 15 years after the initial release, we finally see an upgrade.

However, like many authors and indie bands would attest to, number two is usually a lot more challenging to get right than the first one.

When I first heard rumors about the Aeropress Go almost a year ago, I was intrigued right away. I pre-ordered one from the official website as soon as it was possible.

The ‘Go’ was initially scheduled to drop in August 2019 but was delayed several times along the way. Alan Adler, the 81-year-old inventor, was apparently dissatisfied with the design of the cup.

Now the final product is here, and this, of course, begs an important question; should you buy it?

I hate to be cryptic, but this time I really have to say ‘it depends.’

Read on to find out if you’re in the target audience for the updated version. 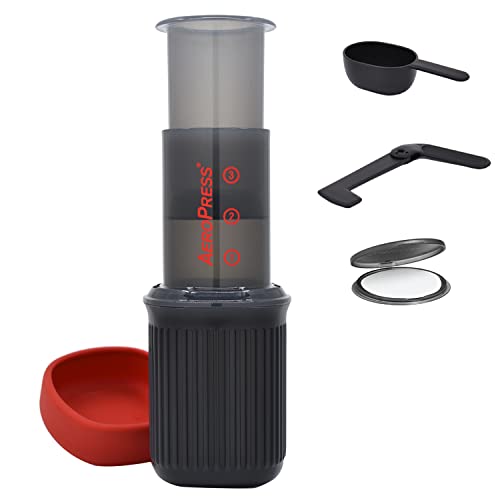 Aeropress Go
It's sleek and well-designed. The cup is also a welcome addition. But hardcore Aeropress-users might be dissatisfied with the limited capacity
See more reviews

The Aeropress Go is basically a slightly smaller version of the original Aeropress.

There are a few cosmetic differences:

This altered design means that the Go will not fit on cups with a wide opening with the same ease as the classic. However, it does give the whole device a more modern and sleek feeling.

There are, of course also some new accessories: The filter holder, the foldable swizzle stick, and the elongated dosing spoon. While they are nice to have, I wouldn’t say that any of them are essential or worth upgrading for.

When the Aeropress Go was announced, many people were lamenting the decrease in overall volume. Many people seemed to want a bigger brewer, not a smaller one.

In practice, the difference does mean something, and some people will be annoyed with the limitations that the size inevitably means.

However, if you learn my technique for brewing bigger batches it’s no problem at all.

Pro-Tip: Remember to always use the Aesir filters. It’s really SO much better than the original filters. I’m not kidding. It makes a huge difference.

However, many inverted recipes will be a lot more challenging to pull off due to the smaller size.

When you invert the brewer, you lose some of the available capacity. The decrease in size of the Go means that there’s not that much sense in inversion.

For me, this isn’t a big deal since I favor the standard, upright position. I also use various Aeropress techniques that allow me to compensate for the size of the brewer.

The most significant change with the new brewer is that we’re getting a cup that also doubles as a carrying kit.

The cup looks decent and is well made. The Aeropress Go fits inside it perfectly, and the silicone lid is easy to attach, yet feels very secure.

The main downside is, of course, that it’s made of plastic. No matter how you put it, it’s just not nice to drink hot beverages from a plastic coffee mug. I’d only do it if I were desperate.

The good thing about the cup is that the pour is lovely and even. This enables it to work as a sort of ‘travel range server.’

When I stay in hotels and Airbnb’s, that’s often one of my biggest coffee concerns. There are usually mugs but never a pitcher.

So even though I don’t plan to use the cup as intended, I’m pretty fond of it.

In case you didn’t know, I’m a HUGE advocate of always brewing in a pitcher.

This ensures agitation, aeration, and a temperature suitable for slurping right away.

If you’re brewing for two persons (like many of us with coffee-loving partners are), then it’s also crucial that you can comfortably pour from one cup to another. The new travel cup serves all these purposes.

Can you fit a grinder inside the Aeropress Go?

A popular Aeropress travel-hack with the original one is that you can fit a grinder inside the plunger. Of course, it’s only pretty small grinders such as the Porlex Mini, the 1zpresso Q, and the Aergrind that fit.

The new version is too short to fit any of these grinders. However, if you just take the catch cup off, you can still manage to fit a grinder. Of course, it’s not the most elegant solution in the world, but it still saves some space and keeps most of your coffee stuff in the same bundle.

The Aeropress Go is aimed at the coffee-loving frequent traveler. However, most of these people probably already own an Aeropress. So should they upgrade to get a cup and a few accessories?

I’m not sure there’s a clear answer to that. The Aeropress Go is pretty cheap. Depending where you’re looking, it costs about the same as the original version, so the price tag shouldn’t deter you.

On the other hand, if you don’t feel like you’re missing anything with the classic model, then what’s the point?

Personally, I’ll bring the Aeropress Go with me for my upcoming travels, and here’s why: it fits a small but essential spot in my travel coffee line-up.

2021 Update: I have mostly been using the Aeropress Go ever since it was released. I now prefer it over the original Aeropress.

If I go on a trip for more than a week, I’d want to bring the Munieq Tetra Drip. I just love pour over coffee too much, and the Tetra Drip is so small and light that it doesn’t influence my luggage size.

However, I’d typically bring an Aeropress (or perhaps Delter Coffee Press) as well for those quick and easy brews.

Bringing the Aeropress also serves another crucial function: it allows me to use the plunger as a gooseneck kettle when brewing on the Tetra Drip.

The addition of a cup that is big enough to work as a range server is something that would fit perfectly in my travel-coffee ecosystem. Sure, the Aeropress Go might only play the second violin; however, it’s perfect for that role.

The Aeropress Go is small, sleek, and sexy. Overall, it’s a worthy successor. The main problem is that the first Aeropress already does so many things right. If you’re mainly going to brewing coffee at home, I think you’ll be served quite well by the original.

However, the new version does offer a few good reasons to upgrade:

If you don’t already have an Aeropress, and you’re looking for a travel coffee maker, I think this is the ideal model.