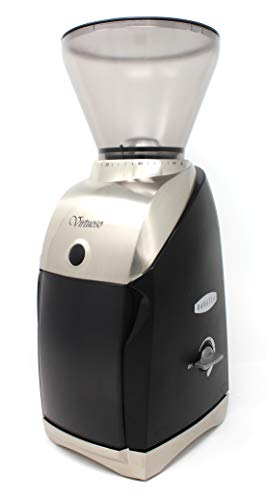 The Baratza Virtuoso is what a lot of coffee snobs would call a ‘modern classic’.

It’s a no-frills grinder intended for home use, but in fact it almost rivals way more expensive professional gear. It’s not uncommon to see coffee shops that use the Virtuoso as a back-up grinder or a secondary grinder for simple stuff like pour over.
See latest price

In spite of the Italian sounding name, Baratza is actually an American company that focuses solely on grinders. It is one of the most trusted brands in the professional part of the coffee scene. They exemplify the “do one thing and do it well”-philosophy that I really like.

Baratza is famous for their excellent customer service with a quick and easy warranty, taking care of your issues over the phone and in any event, giving directions and solutions to fix your own grinders.

taking care of your issues over the phone and in any event, giving directions and solutions to fix your own grinders.

The Virtuoso is made from high-quality parts and weighs around 9 pounds, although there are definitely heavier and more expensive grinders available. On the other hand, it offers quite a bit for its price and can be a practical grinder for those on their way to being a barista.

Normally, grinders in the Virtuoso’s price point may have a hard time grinding espresso. It takes quite a bit of experimentation, but the Virtuoso can give you a pretty good fine espresso grind or even a coarse French press grind at the turn of the hopper.

Very uniform grind. At the setting for pour over it blows away all its competitors in this price range and almost rivals the famous Mahlkoenig EK43.
40 different grind settings. Can be used for anything from pressurized portafilters to French press.
Comes with great, great customer service from Baratza.

The Virtuoso is a sturdy grinder when it comes to daily use, although it could easily break if falling to the floor.

Like it’s little brother, the Baratza Encore, the body is partly made of the same high-quality plastic except with a stainless-steel top and base for more durability. I know it sounds strange to call a plastic ‘high quality’, but in this particular case, it is.

The Virtuoso isn’t made for use in establishments like cafes or coffee shops per se, but it should last quite a while for home use considering its powerful DC motor. I know coffee shops where they use it as a backup grinder, and it seems to hold up very well.

The Virtuoso’s minimalist design makes it simple to use. There’s a pulse button on the front and a timer dial that only needs a twist, then you can leave the rest to the grinder. The basic interface doesn’t have any automation options, but being that the grinder is pretty straightforward, I’d say even beginners to coffee brewing can use it with little to no problem.

Keep in mind that the timer dial doesn’t have any specific indications, so it’ll take a bit of time trying out the different settings as you try to understand each one. While the Virtuoso makes a good cup of joe, it does require some light cleanup when you grind several servings. If it’s used frequently, then cleanup will have to be consistent to prevent the dust from getting into the nooks and crannies.

The Virtuoso has 40mm conical burrs that help produce uniform particle sizes in your coffee grounds and it has up to 40 grind settings with 0 being an extremely fine grind (good for espressos) and 40 being the coarsest (for French press).

These settings take out a lot of guesswork during your grinds and allow you to get a wide range of particle sizes to match the brewing techniques you personally use. Compared to the Encore, the Virtuoso grinds at 1.5 to 2.4g/sec which means you can work on more beans in less time.

The grind is also very even at filter setting. A big test conducted by the New York Times concluded that the grind at this particular setting was almost similar to that of the ten times more expensive Mahlkönig EK43.

The Virtuoso has a large hopper and a nice sized grind bin that holds about a pound of beans which should be more than enough. You have an adjustable 60-second timer, as well as a pulse option to give you a precise grind.

To reduce noise and excessive heat buildup, there is a built-in gear speed reducer that slow the 40mm conical burrs down to 450 RPM for a smoother bean feed.

You can expect to get your beans ground from 250 microns to 1200 microns for either a coarse French press or a fine espresso with the Virtuoso’s 1.5 to 2.4g/sec grind speed.

Although it still makes a bit of a racket, the Gearbox 2.0 design increases drive transmission and decreases noise.

The most common issue with the Virtuoso is the small number of grounds that seem fall out of the grinder after removing the drawer, but most grinders have this inevitable problem. The timer knob on the side also tends to fall off, with some users noticing it has a loose feel.

The lack of any indicators on the timer knob means you’ll have to use trial and error and may waste a bit of coffee before you find your preference. Also, while the timer feature can come in handy, be careful that it’s not left running for the whole minute since it’s said to heat up which can result in a warmer than usual grind.

I recommend only putting in the amount of beans you’re gonna use here and now.

Are there any alternatives?

If you’re already looking at the Virtuoso, no doubt you are aware of its younger brother, the Encore. An equally attractive, but cheaper grinder. Let’s have a closer look at the specs of this popular entry-level grinder.

The Baratza Encore is around $100 cheaper than the Virtuoso, but it has a lot of similar features.

It also has an easy on/off switch rather than a 60-second timer switch. It is a little noisier than the Virtuoso.

If you’re just jumping onto the coffee brewing train, the Baratza Encore has a very user-friendly design that’s great for beginners.

It has the same 40 grind settings as the Virtuoso, but it lacks consistency at the extremes of the spectrum – that means less accurate grinding for both espresso and French press.

It’s still a good choice if you want quality performance, but for more attuned fanatics, it may not be enough.

Another and newer option, that’s worth checking out if you’re contemplating brewing a lot is the Baratza Sette.

Ultimately, the Baratza Virtuoso is a straightforward grinder that excels, when it comes to brewing stuff like pour over, French press and Aeropress at home.

It doesn’t have the fanciest features, but it gets the basics right.

Some people do use the Virtuoso for espresso as well, but it requires a bit experimenting and calibration. It’s good to have the alternative, in any case.

As an added bonus, Baratza is renowned for their admirable customer service, making the Virtuoso a very alluring grinder for a person who’s looking for an upgrade.